Way Ahead of His Times: A Tribute to Ebrahim Alkazi by Priti Bakalkar 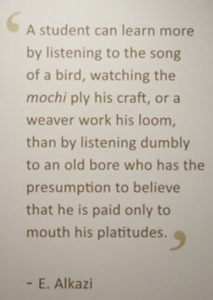 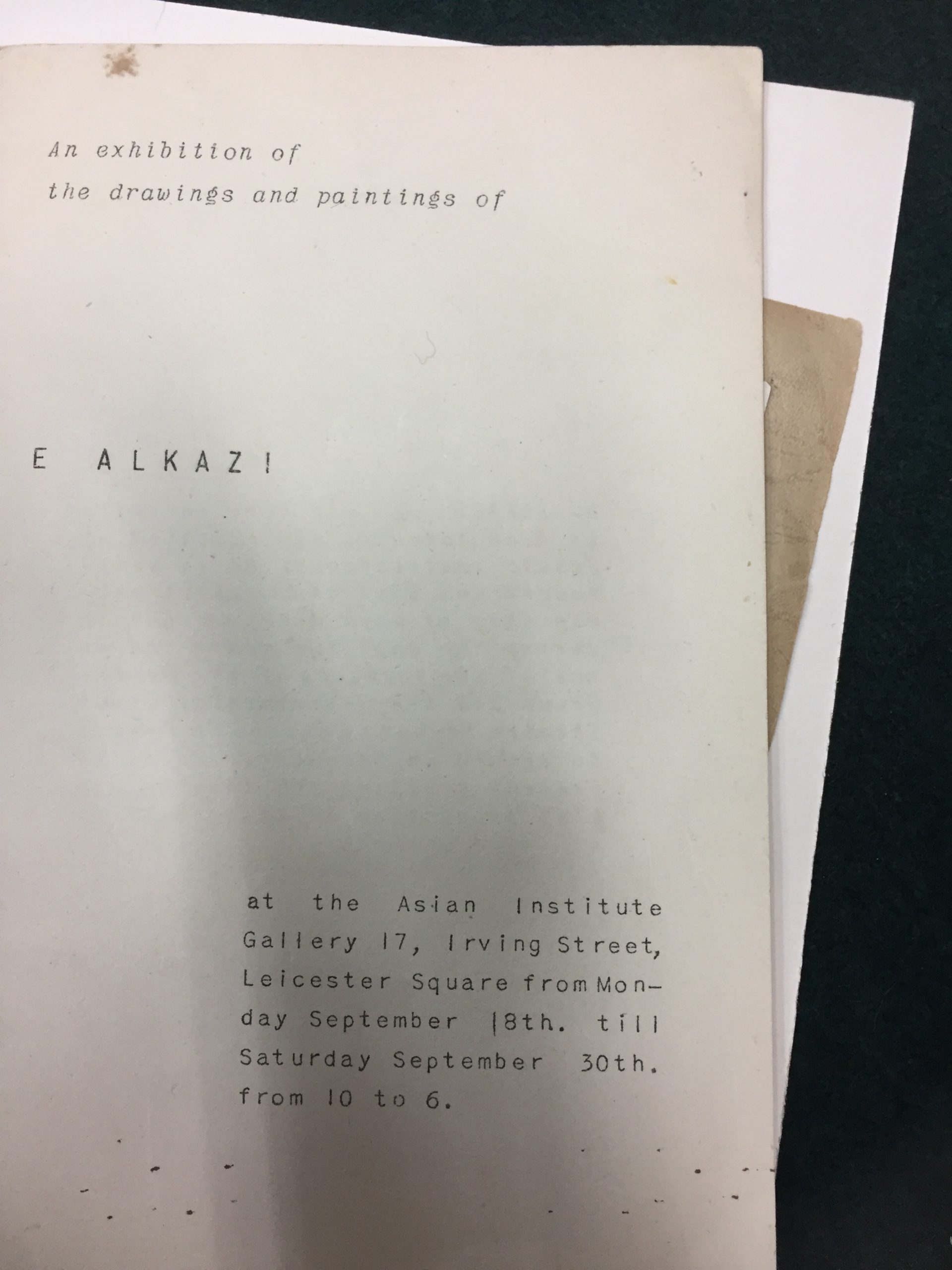 Circa August 2016. I received a call from my friend Quasar asking me if I would like to work on Alkazi Foundation’s exhibition “Theatre of E. Alkazi”, curated by Amal Allana and Nissar Allana. To be honest till then besides the fact that he headed National School of Drama, I did not know much about him, but I agreed to work on the exhibition and the next two months I was literally living, breathing and talking about this legend of a man who changed the shape of modern Indian theatre.

Born in Arab family, Alkazi grew up with his eight sisters in Pune. After his schooling in Pune, he moved to Bombay (now Mumbai) to study at St. Xavier’s college. Here he met Sultan “Bobby” Padamsee who influenced him to a great extent. He became part of Bobby’s theatre group and performed in many Shakespearean plays. When the group wanted to make Oscar Wilde’s Salome, the management of St. Xavier’s found the play controversial and refused them permission to stage the play. But the group was determined to go ahead, so they staged it at Sir Cowasji Jehangir Public Hall– which is now known as NGMA- the very place where the exhibition was going on. It was a fascinating experience to narrate this story to the visitors and see the feeling of awe on their faces.

After the untimely death of Bobby in 1946, Alkazi took the reins of Theatre Group in his hands till he went to London to explore the vibrant art scene there. But as the luck would have it, he ended up auditioning at Royal Academy of Dramatic Arts. He returned to India after completion of theatre studies at RADA and founded Theatre Unit School of Dramatic Arts to train young theatre enthusiasts, many times free of cost- to name a few Satyadev Dubey, Kusum Haider were the students of this school. He formed “Meghdoot theatre” which operated from a residential building on Bhulabhai Desai Road. They used to perform the plays on the terrace of this building. Amal Allana shared a lovely anecdote about these performances. Since there was no elevator in the building the audience had to climb five floors to reach the terrace. Some of the exhausted audience members would grumble about it, so Alkazi Saab offered complimentary tea/coffee for the audience. Little Amal was responsible to serve it without spilling it and ensuring that it was served at the right temperature so that the audience could finish it in time so that the performance could start on time.

Alkazi was also associated with Bombay Progressive Artists’ Group. Artists like M. F. Husain, V.S. Gaitonde, S. H. Raza, Tayab Mehta used to attend the rehearsals of his plays which inspired them in their own art practice. Some of them created sets for his plays. He introduced the concept of scenic design in the Indian theatre scene. He acknowledged the importance of chronicling and archiving of theatre activities, therefore, he published “Theatre Group Bulletin” and then after the formation of Theatre Unit “Theatre Unit Bulletin” which covered theatre scene across India. No wonder he was approached to head the newly formed National School of Drama at the age 37 years.

Alkazi headed the school for 15 years (1962-1977), the longest term anyone has served as head of the school so far. He remodelled the curriculum and made it an extensive three-year course which introduced western theatre concepts along with Indian and Asian theatre forms. From the stories that his students shared, the picture that emerged of him was of a disciplinarian (tyrant according to some), very punctual, very thorough and specific about what he expected from his student actors in and out of the rehearsal room. He used to be one of the first persons to reach the school and probably the last one to leave. While he introduced western theatre to his students he also encouraged them to explore regional drama. His Ashadh Ka Ek Din (Mohan Rakesh), Godaan (Munshi Premchand), Tughlaq (Girish Karnad) and Andha Yug (Dharamvir Bharati) are some of the iconic productions of National School of Drama.

After he left NSD, he reduced his involvement in theatre and entered the world of visual arts, for which he founded Art Heritage Gallery with an agenda of dissemination of art awareness and art appreciation. The gallery showcased the work of many young and emerging artists. Alkazi himself was a very good photographer and an artist. I had the privilege to see some of his sketches and photographs in this exhibition.

In the 90’s he went back to NSD to direct three plays for NSD Repertory Company– Rakta Kalyan (Girish Karnad), Din ke Andhere (an adaptation of Lorca’s House of Bernada Alba), and Julius Caesar (Shakespeare). For a few years, he also ran a theatre training programme- “Living Theatre”. After this, he completely devoted himself to the Art Heritage Gallery and Alkazi Foundation.

The exhibition ended with a theatre meet on the occasion of his 90th birthday. Due to his declining health, he was not able to attend these celebrations but it was attended by many of his students who are now established actors and directors and teachers. They shared many memories about him with much joy and pride in having trained under him.

I wish I could have watched him at work but through these anecdotes, exhibits and his notebooks, with his meticulous drawings and diagrams for his productions, I learned a lot about him so much that I feel I knew him personally. He was way ahead of his times, truly a visionary. He paved the way for us and created this great legacy called modern Indian Theatre. I salute the teacher, mentor, theatremaker, artist, art collector, curator of many exhibitions, the man who wore many hats effortlessly and efficiently- Ebrahim Alkazi. 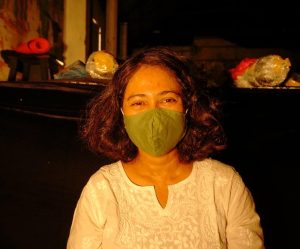 Priti is a trained microbiologist and a lawyer. She practised commercial law for fifteen years. Bitten by the theatre bug, she gave up her legal career to work in the space of performing arts. She has been associated with QTP Entertainment Pvt. Ltd (QTP), British Council, India (Arts Division), Drama School, Mumbai, Goethe-Institut / Max Mueller Bhavan Mumbai and Indianostrum Théâtre (Pondicherry). She assisted QTP on their workshops, plays and various events. While with British Council, she managed a few very ambitious music projects which gave her an opportunity to work with musicians from India, Pakistan, Bangladesh and the UK. She worked with The Drama School, Mumbai since its inception as Programme Head and then after three years she moved to Pondicherry to work with Indianostrum Theatre as Theatre Administrator/ Executive Producer. She has so far assisted them with three international tours of four of their plays in France, Belgium and Tunisia. In the past, she regularly reviewed plays for “the Script”, the online blog of QTP. She enjoys working behind the scenes to ensure successful completion of projects.

Unrehearsed Futures (Season 2) #28 ‘Fishbowl’: Performance Makers on their Experience of the Feminine

Unrehearsed Futures (Season 2) #27 A Dangerous Position to Speak From: Practicing De-colonisation from the Global North