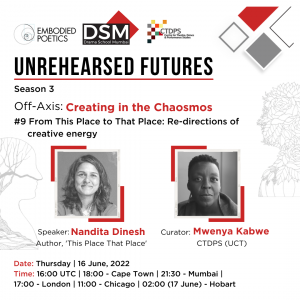 In a special sitting of Unrehearsed Futures, we celebrated the book launch of ‘This Place / That Place’, written by Nandita Dinesh, a writer and researcher who has traversed through the cosmos of performing, theatre-making, activism and more. It also happens to be her first novel.

At first glance, This Place / That Place feels not like a novel; it has paragraphs of prose, dialogues in bullet points, flashbacks and dreams. There is poetry, theatricality jumping off the page. Sometimes, it reads like a play. Sometimes, it feels like a dance between words and characters, a constant moving away from negotiating a particular kind of identity. This Place / That Place has a multiplicity of identities. At first glance, it may appear like a fragmented, disconnected piece of text, but on the other side, it feels like an exquisite mashup of different kinds of writing.

The book centres on two characters, a male protest designer and a female de-programmer, from opposing sides of an unnamed war. On the day of a family wedding, a stunning announcement dramatically shifts the relationship between This Place and That Place, sparking a government-imposed curfew that locks everyone inside.

Suddenly finding themselves sharing the same isolated space, the two grapple with unexplored attraction, their deep and abiding admiration for each other’s work, and a bond they hope to save from being another casualty of war. Interwoven throughout are documents and past correspondence between the two laying out their history and how each sees in the other hope for mending the rift between This Place and That Place.

This performative nature of Nandita’s writing does come, in part, from her background in performance.

Performance has always been a part of her life, says Nandita. When she was three years old, her mother put her in a Bharatnatyam (an Indian classical dance form) class. So, being on stage has been a part of her upbringing, be it through dance or fancy-dress competitions and fashion shows. Growing up in Coimbatore, Tamil Nadu, studying theatre as an academic subject never crossed her mind, for it wasn’t really understood as something to study about. Theatre was something one pursued as a hobby or did to add to one’s extracurricular profile.

This changed when Nandita went to study in the US as an economics and math major. As part of her liberal arts degree, she had to take a class in one of the arts. The plan was to walk in, do a semester, knock that credit requirement out of the park and bounce back to her math class. All of this changed when Nandita walked into the ‘Intro to Acting’ class, and for the first time, engaged with performance in a completely different way.

For her semester abroad, she landed in Uganda, and with a newfound love for theatre, she decided to make a hyperbolic leap to posit that theatre for development is linked to development economics in a tangible way. She learnt about the war happening in northern Uganda since 1986. “I was just blown away by my ignorance. I had no idea what was happening,” she says. “I had no idea that there was even a war going on there. And in the middle of all of that, I was told, as part of my research, that there are theatre makers, who are working in this war zone in northern Uganda. That was not something I ever expected ­- a place for art and creation in a place of war.”

The shift to creative nonfiction

This turned into an obsession which she grappled with for more than a decade. She went on to work as a researcher, educator and community theatre practitioner in Kashmir, India, the United States, Mexico, Costa Rica, Guatemala, Rwanda, Uganda, Kenya, South Africa, and Zimbabwe. For her PhD project, she spent most of her time in Kashmir. She discovered her interest in writing while pursuing the degree from the University of Cape Town. She realised she loved writing about making theatre, writing about theatre, writing plays, something she did not expect as most people are frustrated with the writing process during their PhDs.

“That lasted for a long time. Until the shift into focusing particularly on fiction and moving away from community theatre and writing for and about the theatre happened because of various forms of censorship that have occurred along the way,” Nandita says. “It was also my own exhaustion from having to deal with that. The exhaustion from not only having to deal with that, but then having to question well, what does it mean to create these beautiful works which ultimately get shut down? I think that’s when writing in a more creative way outside of academia, and seeing writing itself as a performative act, became more of my realm.”

Through her life so far, Nandita has straddled the space of academia, artistry and activism. “I have been all of those things and other things at different stages,” she shares.

When she began this work in northern Uganda and Rwanda as being the places where she began thinking of herself as a theatre activist. “I was using theatre to change the world. That was my thing. And for a few years after that, that remained the case. I had a strong belief that theatre has the potential to create tangible shifts,” Nandita explains. “And I should clarify that because impact could be defined in so many ways. But in the way I understood, it was a tangible toppling of systems of oppression, a tangible sense of people having fiery debates through the theatrical realm that they couldn’t have (otherwise).”

In her experience of the world of activism, Nandita felt she did not fit in, because her questions were always about the people who couldn’t fit. “Let’s take, for instance, the soldier of an occupying nation state, who kills himself. In one sense, he is a perpetrator, because he has been perpetrating the occupation of violence. But at some point, he became victim to that occupation himself. And he has now killed himself. And so, who is he? Is he a victim? Or is he a perpetrator?” she asks.

For Nandita, nothing was black or white. She explored grey-ness in her work. “I found that my approach to greyness was not appreciated. And I can see the other side. I think people were saying pick a side. So, if you’re talking about this wishy-washy grey zone stuff, you’re not picking,” she explains. For a long time, she tried to “pick a side”, do the “activisty thing” as she understood it, but it never fit. It never felt sincere, she says, and she would always find some way where it just seemed too complicated to take on and those were the stories, she was interested in.

Slowly, over the years, Nandita has distanced herself from that word; she doesn’t call herself an activist anymore. In her words, she tries to “understand conflict through art”.

“That’s the closest I’ve come to understanding war, understanding the human condition and how we are both so incredibly resilient, and yet seem doomed to make the same mistakes over and over and over again. I love trying to unpack that. And I love doing that through theatre,” she admits. “I love doing that through writing, but I’ve become far less focused on what does it do. What is it toppling? What is the tangible impact? For me, even that’s become grey. It’s more about what questions does it bring up for you? And where are you sitting with it? And where do you want to take it?” For now, she explores these concepts through writing.

“I think a huge part of that links to the notion of the experiences we had with censorship when the shows (of Chronicles of Kashmir) were closed. I couldn’t take the responsibility of being responsible for someone else’s safety. I think that’s the part where it feels like if I’m writing, the risks are on me. And that I can talk to myself and rationalize whether I’m ready to take it on. But with ensemble theatre making, with devised theatre and collaborative creation, I wasn’t ready to deal with the risks to my team,” she shares further.

For any piece of art, there are yay-sayers and naysayers. With a work like This Place / That Place, Nandita is aware of the kind of critique it might receive. One of the first she can think of is the book being called “wishy-washy” and “vague” since it does not place the story and characters in a specific geographical, cultural or political context. “I think some of them would like for me to take that stand,” she feels. “I understand the critique of using this platform of having these conversations to raise awareness or to lobby for formal dialogue, political intervention and things of that nature. But that’s not for me.”

“However, I could just as well see one of the amazing theatre companies I’ve worked with adapting it to their context. And I would say, yes, please do that. It must be folks who want to do that. I can only offer the framework.”

The form of This Place / That Place is such that it calls on the reader to decode the text in multiple ways simultaneously. In that process of simultaneous multiple decoding, it is insisting that one doesn’t claim allegiance to any of those things. Perhaps the work is in that practice of recognizing these multiple encoders, and decoders that are constantly engaged. As the conversation comes to a close, Nandita reiterates that we are beings with multiple identities and her work is an attempt to recognize that plurality and make space for possibilities, instead of pigeonholing them.

‘This Place / That Place’, published by Melville House, is now available for sale.