Unrehearsed Futures (S3) #7 The Arc of The Dervish: Learning New Consciousnesses For An Ever-Changing Reality 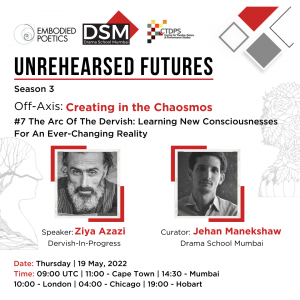 By now, we’ve established that we are citizens of a perpetually chaotic world. The pandemic was one kind of a disruption. We are facing and fighting multiple kinds of wars each day – be it physical, political or ideological – and as we progress through time, we find ourselves in a world where it is harder and harder to be on balance, harder to be grounded and harder and harder to be steady. How do we still embrace it and find a generative capacity? How do we, instead of looking for grounding, skill set and centering, embrace what it is to be off balance? Can we embrace what it is to be falling at any given point in time?

As we hurtle through this chaosmos, we engaged with Ziya Azazi, a Turkish dancer-choreographer and founder of Dervish In Progress, about the idea of the spinning, the whirling dervish and attempted to understand his perspective of going beyond the ritualistic idea of spinning from his embodied experience at a recent Unrehearsed Futures conversation.

The Power of Spinning

Ziya, who has been involved in the art of spinning or the dervish for 23 years, views the human body as an eight-billion cell puzzle. But in the monotony of everyday life, the body gets lost. Some try hard to awaken their body, to increase the awareness of each cell. He loves the work he does for he starts liking life, existing more, and feels more connected to others.

“If I move constantly, if I’m not rigid, if I’m not a fixed image, but keep moving, then I’m still. I’m in balance,” he said and added that whirling, or spinning, is a “fantastic tool” to dive into oneself; to go from the shallow self to the deeper self.

He describes himself as a “hacker dervish” who is trying to understand a traditional art form and add it to an “open-source reality”. “I’m keen in trying to spread it out and help people to touch it and this instrument, to dive into ourselves. I see it like a rocket to go into space,” he says.

Ziya likens spinning to digesting food, where it is not about putting food into one’s mouth; it about chewing it, digesting it to transform it into energy. “I do see spinning in that sense as a fantastic tool,” he says, “which helps the participant to create more energy with the oxygen they breathe while moving, with the food we ate before. The food and oxygen come together to create physical energy. With this physical energy, as I always say, I move and think and feel.”

According to Ziya, this energy affects the way one thinks. He believes that whirling has scientific implications on one’s mind and body. The collection of synapses in the brain, or the connectome, has high plasticity, he says. “The connectome is plastic; like the spinning self, it changes all the time. It is never static,” he adds and elaborates that through spinning, he creates more and more energy which changes the connectome in the brain and helps him access forgotten memories of the body.

“Because of the spinning, one is in a blurry state. Because I’m busy with myself, I’m diving faster and deeper into myself. This is the power of it,” he believes.

For Ziya, who travels around the world sharing the pedagogy of Dervish-In-Progress, the state of imbalance is balance itself. Change is the only constant. As humans evolved, we have come to a point where we’re detaching from our physical reality and living in a virtual world. “We are backing up our all experiences we had through the millions of years in the past. As a world traveller who had had quite a few flights each month, the arrival of COVID shocked my body. I was blocked in my apartment in Vienna for 15-20 months. I started checking news and conspiracy theories on social media,” he shares. “The brain is the monster inside me. I don’t tame the brain I end up becoming the monster and we suffer because of some monsters around us and among us.”

He adds therefore he needs to keep working with himself, on himself, to make a master out of himself solve the 8-billion cell puzzle that is his body, “And here I see the necessity of going on in movements like spinning.”

Spinning helps one test their limits and come to the edge of “myself, my organism, my mind, my spirit and my abilities”. “If we are courageous, you just need to surrender. And when you surrender, you learn the game, you are faster and more often have the chance to straddle that edge and create a magnetic presence around you.” For Ziya, spinning takes him out of everything, deep into an internal reality, and disconnected from his external reality.

After spinning, after being in a state of imbalance, when Ziya comes back to the external reality around him, he is changed. The world feels more boring yet, because his senses are heightened, more beautiful, for he is more present, he is alive.

The Actor’s Resource: How to Choose a Drama School Unrehearsed Futures (S3) #8 Seeding the Field: Experiencing the now, perpetually