Unrehearsed Futures (S3) #6 Ukraine: The Show Must Not Go On 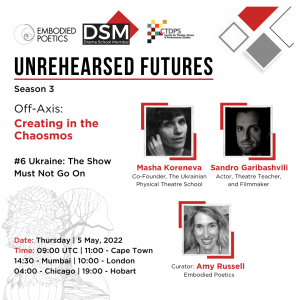 For all her life, Ukrainian theatre-maker Maria Koreneva was a pacifist and against war. As a Gestalt psychotherapist herself, she knew what collective trauma meant and hence she always argued against the need for aggression. She was the person who said “the war should end, and then we’ll decide what to do”.

It was not until when a Russian land missile smashed into the house next door, and the house where she lived in Kharkiv, Ukraine shook while her family took shelter from artillery fire, that something changed in Maria. “All of a sudden, I understood that there are things that are so important. They are so important for everybody that yes, unless the war is fought to the end, it doesn’t make sense to stop,” she said during a recent Unrehearsed Futures (Season 3) conversation. “I never knew that I would actually say the words that we have to continue fighting like this.”

For this conversation, we were joined by Maria, and her partner Sandro Garibashvili, an actor, teacher and filmmaker, who fled Ukraine in March and have now landed safely in Lithuania. In a world where information is never neutral and a war of propaganda going on, we paused to examine the dramaturgy around it, taking the ongoing war in Ukraine for context: Who is saying what? What is the message that people are trying to communicate with it?

While dissecting the narrative around the war, Sandro added that while negotiations are taking place between the two countries, “there’s less and less people that actually believe or support them, because at this point, we’re just dealing with a blatantly aggressive force whose purpose is very clear.” He believes the only fruitful outcome of this war would be to witness the collapse of the “Soviet monster” from inside. “That is the only real outcome that Ukraine will settle for: pushing them back to the boundaries of before their invasion of Donbass and Crimea.”

Tick, Tick, Boom: Theatre as an Antidote and Solution to the Climate Change Crisis The Actor’s Resource: How to Choose a Drama School

The Actor’s Resource: How to Choose a Drama School

Tick, Tick, Boom: Theatre as an Antidote and Solution to the Climate Change Crisis