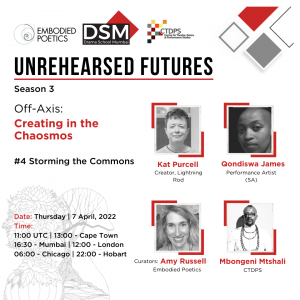 To what extent can performance help us to generate meaningful encounters? Not only despite, but generated by the incapacitation that our chaotic world seems to produce?

Probing these curiosities, we were joined by a pair of exciting activist-practitioners at a recent Unrehearsed Futures conversation – US-based Kat Purcell and South Africa-based Qondiswa James – who shared about their work, which focuses primarily on intervening in public spaces as a way of engaging with the politics of belonging among various other things.

Qondiswa describes herself as a “cultural worker” interested in public space, how bodies make community and public space, and how solidarity is built in public space. As part of her Master’s from the Institute of Creative Arts, University of Cape Town, she did a series of 12 interventions around the city of Cape Town to present “these images of workers as living monument, almost to haunt the city with the fact of ourselves, of themselves.”

Describing her practice as “multifaceted”, Qondiswa works as a theatre-maker, performance artist, film and theatre performer, instillation artist, writer, arts facilitator, and activist. Her current preoccupation is with understanding how economically disadvantaged communities based in the outskirts of cities like Cape Town, can be brought into the centre. “How do you bring people from the outskirts into the centre? How do we, who find ourselves at the so-called centre, rupture outwards?” she asks.

Qondiswa shares she began with wanting to experiment with the idea of invisible insurrections. “I came across this chatter around temporary autonomous zones,” she describes, “which are basically methods of liberation that happen already in the carcass of this dying husk of a world that we’re in. And that there is potentially, even in this moment, a temporary autonomous zone in which an invisible insurrection is taking place.”

Although working in a different context, Kat, a trans artist, sees themselves as one of the many people putting their “shoulder to the work of community reliance in the face of state violence”. Based in Minneapolis (US), Kat’s roots are in the theatre. “I’m a lighting designer and a performance artist and I produce experimental events and happenings,” they describe. They help to run a collective called ‘Lightning Rod’, which is an arts organism dedicated to legacy development and opportunity for queer and trans and gender nonconforming artists in the Twin Cities of Minneapolis and Saint Paul.

Performing in the commons

Cape Town is a massive space where the politics of class, race, safety and security, gender, and religion is very layered and complex. Qondiswa situates herself as a middle-class resident of the “centre” who, over the years, has built relationships with communities, movements, and institutions and schools that reside in the margins. So, whenever she has an idea for a project, she reaches out to a friend from that community to see if it is relevant to their context and how they can help her out with it.

About her experience of performing something in the public commons, Qondiswa says she has tried to move away from her perception and idea of what she thinks might happen. “What I’ve really tried to lean into, and I found in the process of doing it, of being in public space, is just to dwell, to curate something, curate an image, understand the site that you’re going to go to, to the best of your ability, and not have any pretence about what you think is going to happen,” she describes.

Qondiswa shares about one of the public interventions she did at Cape Town’s Bellville Taxi Rank, which is one of the working centres of the city. While a lot of people work there, it is important to note that a lot of people who live on the outskirts connect to Bellville to go home. This is because, during apartheid, Cape Town was designed in a way to keep persons of colour out. So, people who have (and had) to travel long distances, went to the Bellville Taxi Rank to do so.

For her public interventions, Qondiswa usually dwells in a public setting and picks one action to do. In this case, she chose to portray a nurse, washing herself. “I take a little plastic washbasin, and I situate myself in the middle of the Rank, in the middle of a road. And, I stand on crate, and I take off my clothes. But I’ve got this old-school, beige petticoat on, and I wash under that,” she explains.

While she has done a lot of public protest in the nude in the past and is comfortable with it, she points out that it is important to think about the specificity of site. “What you’re doing to the public with your naked body, but also what the public can do to you. And at a taxi rank, to be completely naked as a femme in South Africa? No, not for me,” she emphasizes.

So, while she is washing her clothes in the middle of the road at the Bellville Taxi Rank, interesting things start to happen. People begin stopping by, wondering what she is doing. A taxi with male passengers pops past her, shouting and saying what she is doing is indecent. As the taxi stops, her friend, the person filming her performance, goes and nips their protests in the bud. While this happens, traffic cops notice the taxi blocking the road and traffic.

“Instead of just walking past, they are now stopping. The traffic cops get these taxi guys to move,” she recalls. “It’s really interesting that, in this instance, the agents of the state sort of also become in cahoots with us. These are the subtleties that you can’t pre-plan for, that the people who are the cops, in this instance, come and create a safety zone. But I also think it’s the humans; it’s not the cops if that makes sense. The people who remember themselves outside of the uniform.”

The traffic cops became her co-conspirators. Once they knew that she was a master’s student at UCT, they park their cop car in the middle of the road, essentially creating a stage space for Qondiswa and directing the traffic around her. All they asked was, “How long do you think she’ll be?”

Qondiswa recalls that the audience surrounded her in a semi-circle and began to watch her attentively, wondering and speculating what she was doing. There were moments of recognition and solidarity, which were not about the nurse. “It’s about the universality, and an action of care, which I found interesting. I was thinking about how for nurses, their work is care work. What is it like to return home after a two-day shift or a half-day shift and to wash yourself? To care for yourself in that very intimate way?”

In terms of stagecraft, Kat talks about a piece of work they had devised with a collective about The Tombs – the colloquial name for the Manhattan Detention Complex, a municipal jail in Lower Manhattan.

“It is a holding jail, although some people end up being there for longer periods of time if their trial is set back. It’s only really built to hold someone for a few days. But it’s in a large, brutalist building in the heart of Manhattan,” describes Kat. “And the windows are few and narrow. Most of the holding cells are actually in the basement, at least three floors down below the ground. A couple of us had been held in there. And we knew people who had been held in there and had really terrible experiences.”

Kat shares they also realized that the general area is pretty close to the financial district. “A lot of people walk past this place, not really knowing what it is. Unless you’re intersecting with the so-called justice system, you don’t really know what that building is,” they say.

It took them and the collective six months to plan the performance, where one of the collective’s members was dropped off in a cage in the middle of the intersection outside The Tombs, which also houses the courthouse.

“As we dropped him off in the cage, there was just this moment of silence, very calm. It was right before lunch, so the traffic was light. It seemed as if nobody was going to notice that there’s a man in a cage in the middle of this intersection with the birds chirping. And like you do in New York City, the cars were just going around him. Like as if it wasn’t happening. It was just, you know, a yet another outrageous thing that some New Yorker is trying to do to get attention,” says Kat.

They chose the intersection outside The Tombs and the courthouse as their site, where people who had seen a judge or had been released from jail would be one of the first to notice the cage and the man inside it. These were the people who first began to vocalize about it.

As time passed, it got closer to lunchtime, and the traffic became heavier. That’s when it started to become a problem. People began honking. Kat describes that as the traffic around them got heavier, people became angry with the performer for blocking the road.

“Eventually, the police came and taped off the intersection in a square,” shares Kat. “And they had to cut him out of the cage with a stone cutter. The folks on the side-lines who had stopped to watch were also vocalizing in such a way where they were really getting it and they said, ‘Oh, you have to cut him out to put him in’. Like, you have to take him out of the cage to put him in the cage, because they arrested him.”

Such site-specific performance become more complicated than surface narratives when one assumes that a figure standing in the space that interrupts the place somehow, is always already in conflict with the official state mechanisms that produce that space, the textures and shape its politics. As the conversation comes to a close, it is interesting to note how agents of the state, in both examples, step in and out of bounds of their expected roles and end up participating in the performance, for better or for worse, either in complicity with the intervention or to reassert state power and the “proper way” of occupying spaces.