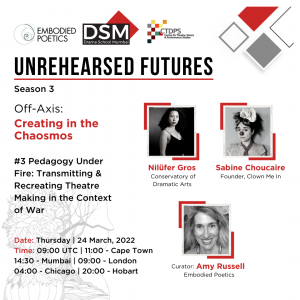 We live in a constant state of flux, of madness, and instability; in a chaosmos. While the pandemic brought disruption to the fore, this state of instability, of being off-balanced has always been a part of our lives. As we delve deeper into living and creating in such a state in this season, we decided to foreground a recent Unrehearsed Futures (Season 3) conversation against the background of these changing times: What is it to transmit and recreate theatre-making in the context of war? What happens to theatre pedagogy, to students and teachers, and the very notion of drama when the wider context is that of war?

To help us understand this, Nilüfer Gros, a Turkish doctorate researcher from the Conservatory of Dramatic Arts, and Sabine Choucair, the founder of Lebanese group Clown Me In, joined in conversation with co-curator Amy Russell.

Playing with testimonies and war

Hailing from Istanbul, Turkey, Nilüfer spent most of her life outside the country. With a background in visual arts and theatre, she studied at the London International School of Performing Arts (LISPA) in 2008. In 2011, she decided to move back to deal with the country she came from. After two years, she moved to Mardin, a multi-ethnic border town and region in Turkey, a stone’s throw away from the Syrian border.

The region has a complex history, layered with centuries of wars and conflicts, from the Armenian Genocide to Kurdish revolts following the establishment of the Turkish Republic. It is home to Assyrian and Chaldean minorities among other ethnic groups and it has been living through the Turkish-Kurdish conflict for over 40 years. Nilüfer has spent most of her life living in the midst of this conflict between the Turkish state and the Kurdistan Workers’ Party (PKK) although she was living in Istanbul. In 2013, she moved to Mardin and witnessed the beginning of the Peace Process, a unilateral ceasefire between the Turkish State and the PKK which was abandoned in 2014 as war broke out again in the region.

One must note that Mardin, and the Southeastern Anatolian region, the Northern Kurdistan region so to speak, have been living in the shadow of multiple, layered wars for centuries. According to Ottoman military records, Kurdish rebellions have been taking place in the region for over two centuries. Its memory of rebellions and massacres can be traced in its cultural performances such as its lamentations and tales.

“When I was there,” recalls Nilüfer, “there was a big war between the Kurdish and Turkish forces. ISIS was also present in the region at the time. Suicide bombings and the whole of the Syrian civil war spilled into the region. At the same time, we were witnessing refugees coming and crossing the border to take refuge in Mardin and other parts of the region.” There were other conflicts too on top of that. “Inside all of this, I found myself looking at a landscape of conflicts; not only the horizontal, but also vertical,” she further describes.

Nilüfer describes it as living with the “ghosts” of other wars, genocides, and massacres. “So, when I started working there, I had to dig slowly. And it took years. It still continues,” she says. She was teaching at Mardin Artuklu University at the time and started a storytelling club, which turned into the Crossing Theatre Company, where she began creating theatre from people’s testimonies, especially women.

“I had to find ways of taking people’s testimonies and presenting them without crossing too many lines politically, to ensure we wouldn’t be attacked by regional authorities,” Nilüfer says. In Mardin, most institutions are under the control of the Turkish government, and it became imperative for Nilüfer to escape that control; to become invisible and establish the Crossing Theatre Company as a space outside of all these stakeholders.

What she also had to balance is her colonial positioning as someone coming from Istanbul to teach students who came from Kurdish families, whose members had some sort of connection to the Kurdish liberation movement, even an emotional one. “There’s this hierarchical relationship between you and those people who have been considered as ‘terrorists’ for a long time. I wanted to take the theatre group outside the university, open the space where people could say what they wanted to say, regardless of influences from everywhere,” Nilüfer asserts. She shares their process of working which involves sharing personal stories and sonorities they heard while living in the region. Every time a new member joined the group, Nilüfer acknowledges that they were coming in with their own stories of their mothers, fathers, and grandmothers. The plays they performed were the fruit of a process of writing, rewriting, re-introducing more stories, taking out some; with each staging, and new members joining in the performances developed further.

Clowning around in Lebanon

Like Nilüfer, Sabine, a Lebanese theatre-maker and founder of Clown Me In, has also grown up in war. She was born in Lebanon during the Civil War (1975-1990) and grew up with the Israeli-Lebanese conflict.  “I’ve been displaced so many times; we changed 13 different houses when I was a kid, going from one part to the other,” recounts Sabine during the conversation.

Sabine lives in a conflict-ridden country: refugees have no legal status and end up only awaiting international aid; her building has 11 hours of power cut every day; there is a lack of access to clean drinking water; there is a corrupt political system which elects the same leaders back to power and so on.

She studied theatre at the university level in Lebanon and even before she joined LISPA in London, she knew that theatre was her tool to use in life. Having always been interested in working with people, more than being just an actress on stage, Sabine worked with Palestinian refugees in Lebanon before joining LISPA. “These were Palestinian people who had fled Palestine and come to Lebanon. They live in a very difficult situation in the country here because they have no legal papers,” says Sabine. “They’re not Lebanese; they are refugees, and they’ve been refugees for the past 60 years or more. So, it’s generation after generation.”

By the time she returned to Lebanon, the Syrian civil war had begun, and thus the country saw a fresh influx of refugees. At one point, there were more Syrian refugees than Lebanese people, says Sabine. That’s when she started Clown Me In, a group of clowns who went out on the streets to say no to oppression.

“I came up with an idea that we call the ‘Caravan’,” she shares, “which was a clown performance done on the roof of a van.” Caravan toured different villages and cities in Lebanon. The performance was based on personal Syrian refugee stories and Lebanese stories. Caravan was meant to go to places, where people listened to the stories, watched the actors and then opened a conversation and shared their own tales.

It is important to note that Syria used to occupy Lebanon from 1976 to 2005, hence when Sabine began her work, there was a certain level of hostility towards Syrian refugees. “The aim was to go to these communities, the most hostile communities and show them, ‘Here are our stories which are very similar to Lebanese people’s stories during the war. Let’s talk about that’,” says Sabine.

The other part of Sabine’s work is the activism she engages in through Clown Me In. In August 2020, a massive explosion of 2750 tons of ammonium nitrate, stored at Beirut’s port, caused several deaths and injuries. “It displaced 300,000 families and destroyed so many houses. I mean, even our team, many of us were hit hard by the explosion. I would say everybody in Lebanon was emotionally wrecked after the explosion.”

After the explosion, Sabine and her team at Clown Me In went to places in Beirut that were destroyed by explosion and began engaging with local communities to spread joy and laughter. The advantage of being clowns on the streets is that they end being at the frontline of every protest, she says. “At all protests, as clowns, we demand our rights,” says Sabine. “We consider ourselves in a never-ending lab where we try out things on the street and see what works and what doesn’t. We’re often left to be on the streets without problems, because the authorities think that since we’re clowns, we have come to do stupid things.” Apart from this, Sabine also runs a school that works with professional performers, actors and activists and gives them a tool to be able for them to go do what Clown Me In is doing.

Dangers of working with testimonies

Both Sabine and Nilüfer live in situations of conflict and work with real stories, people and testimonies. There is inherent danger in using personal testimony in such spaces. How does one navigate this?

Nilüfer shares that since most of the group she works with is Kurdish, the politics of the region is never separate from their life experience. “And there are, sometimes, testimonies that are really, really hard to even hear,” she adds.

For her, the important thing is to keep the theatre open, to keep the plays happening. One of the first things she considers is how can they put up personal testimonies on stage and still protect the whole group from being arrested by the Turkish Government. Over time, Nilüfer shares, she has found a way of subverting those in power by using different tools, picking fleeting sounds and images from people’s stories and creating a landscape of lamentations, for example.

What is unique in Nilüfer’s case is that the Turkish authorities never had anyone making work like she did, so they didn’t quite know what to do with her. At one point, the head of the Turkish intelligence came to watch her play. “They called me two minutes before the curtain goes up and said the head of the Turkish intelligence would come and see my work,” she recalls. “But they didn’t know how to blame me. It was about taking the performances to a point where they cannot elaborate an accusation on you.”

For Sabine, humour happens to be her tool of subversion. “That’s also important because we get away a lot with humour. We get a lot out when people laugh. That’s one way to deal with it,” she shares. “Another thing is, we always get permits to be on the streets. It’s not a problem to be on the street, to get the permits because we’re called Clown Me In. And they think it’s okay. Most of the time, they don’t even read our scripts before giving us the permits.”

As the conversation comes to close, Sabine also shares they only perform when they have a wall behind them so that they can’t be attacked from behind. “We always park our cars where we can leave straightaway in case we have to. We have these techniques that thankfully we haven’t had to use yet, but we have them,” she says.

Take A Child To The Theatre Day: Can Theatre Rebuild a Generation of Lost Childhood? Unrehearsed Futures (S3) #4 Storming the Commons