Unrehearsed Futures (S3) #11 The Burdens of Witness: writing (by) women in times of crisis 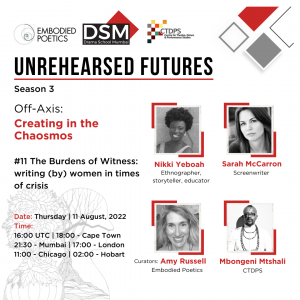 In our first conversation following the mid-season break of Unrehearsed Futures (Season 3), we dove into the chaosmos of writing stories centred around female protagonists and the complicated positioning of women in scenarios of social upheaval and crisis, with US-based ethnographer, storyteller and educator Nikki Yeboah and screenwriter Sarah McCarron.

Whether negotiating intimate family dramas or the grand scale of a global apocalypse, female protagonists are usually figured as witnesses to (though rarely agents in) the making of society. Responding to how she arrives at the choices about which stories are important to tell and why those stories might be important to tell, Nikki shares an interesting anecdote. When she studied television writing during her undergrad years, one of the questions she was always asked was, “Who is your audience?”

“I wanted to write stories about West African families. And they would always ask, ‘but who’s going to watch this, who’s your audience’, and they thought it was productive advice,” she recalls, “But that caused me to stop writing for many years, because I thought that there was no audience for my work.”

However, when she entered the theatre, she found it freeing to create in a space where she didn’t have to consider her audience. Nikki, who went on to create The (M)Others, a piece of documentary theatre exploring her family history, could consider herself and the stories she wanted to hear instead.

“I’ve always thought if I had any kind of unifying idea behind the projects I do, it has to do with being subversive. But that’s like the opposite of conservatism, sort of,” Sarah adds.

Ahead of India’s 75th Independence Day, theatre artists share practices they seek freedom from ‘I am a Chhara, Not a Criminal’: Budhan Theatre member Atish Indrekar on using theatre for social justice