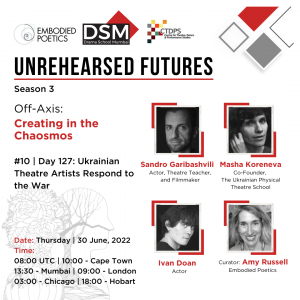 As part of the last session before our mid-season break, we decided to continue our conversation on Ukraine. On Unrehearsed Futures, we engaged with Ukrainian and Russian artists twice (here and here) about the war and the dramaturgy around it. While the news cycle is tiring of Ukraine, we are convinced that Ukrainians, near or far, are fighting on behalf of the “free” world, however we may define that.

In this session, we had Ukrainian artists Kostyantyn Zorkin (who is currently in Ukraine), Sandro Garibashvili, Maria Koreneva and Ivan Doan sharing what their artistic responses have shaped up to be in expressing their personal and national struggle.

Kostyantyn, a puppeteer, sculptor and performer, works with wood, metal, paints and other media. Speaking of his artistic offerings since the war began, he recalled the words of Ukrainian writer and friend Oleksandr Mykhed: “There is no time for metaphors at the moment.”

“There is no time for reflection or extraneous philosophies, or intellectualizing for people who are in Ukraine,” said Kostyantyn. From a village in the Sumy region, he has created a wooden installation called ‘Rebuilding My City’ – buildings carved out of wood to represent those that were destroyed during the ongoing shelling and bombing.

For Ivan, a Ukrainian Vietnamese actor and voice-over artist, his expression of and response to what is happening in the country has been translating and doing voice-overs for videos to counter the Russian propaganda.

“They’re artistically different,” said Ivan, “because they’re so absurd. I played around with voices a little bit and sort of also translated the things that would be normally lost in translation. Culturally, they’re different. So, you have to accentuate something in the accent, for example, to make it sound a little more absurd.”

Curated Conversations: Nisha Abdulla, Rumi Harish, Krupa on the non-definitions of the body