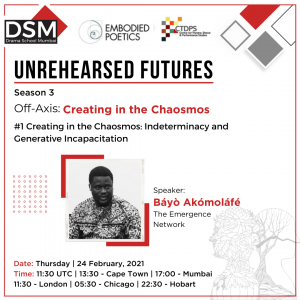 For our first conversation for Season 3, we invited Dr. Báyò Akómoláfé, a Nigerian poet, writer and public intellectual to share his thoughts on our theme for this year – Off-Axis: Creating In The Chaosmos.

Akómoláfé shared that when he received the invitation to talk about the chaosmos, it reminded him of something he has been writing about: Following might very well be flying without the tyranny of coordinates. He called the idea of a chaosmos to be “shocking, disrupting, troubling, and yet promising, because of the ways that it upsets colonial order, because of the ways that it disturbs imperial continuity.”

He said that modern civilization is premised on the idea of the ‘separate individuated agent’ and the speculatively geometrically aligned and rational, or progressively rational world outside of this agent. The work of the modern citizen, he added, is to “galvanize our God-given resources to control the world, to predict, to describe, to explain and control the scientific method. That’s what gives us power.”

However, he speculated, the universe seems to have a life of its own, imperatives of its own. “It seems to dance away from capture. It seems to retreat away from being fully named, like an infinitesimally small virus that upsets the entire economy, and breaks open all our control measures,” he said during the conversation.

Akómoláfé shared his fascination for the idea that the universe is animated, alive, promiscuous. “It is a fugitive. It will not be named. I think it is beautifully captured in the concept of the chaosmos,” he said, “I had a different name for it. I called it the indetermiverse. The universe is somewhat haughty and proud, because it’s free.”

Curated Conversations: On Harkat’s Virtual Interactive Stage with Karan Talwar WATCH: In Conversation with the Women of Aagaaz Theatre Trust