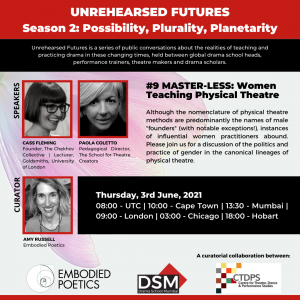 The ninth session of Unrehearsed Futures (Season 2) witnessed a rich conversation about the women who contributed significantly to European legacies of “masters” Jacques Lecoq, Jacques Copeau etc. During the session, Cass Fleming, founder of The Chekhov Collective, and Paola Coletto, the pedagogical director of Padova Arts Academy discussed that though the nomenclature of physical theatre methods are predominantly the names of male “founders” (with notable exceptions!), instances of influential women practitioners abound through history.

While both Fleming and Coletto trained in Lecoq-based and under Lecoq’s pedagogy respectively, they’ve sought to move away from the idea of following in the ‘master’s’ footsteps. “I love the idea of master-less,” Coletto shared during the conversation. “Often, I have been pointed out as a ‘master’, or even worse a ‘guru’. I’m horrified by that. The reality is, I don’t want that responsibility because I have always felt that when one gives you that title, they make you responsible for their journey. You are looked at as someone so powerful and so potent, that you can do anything. You should, you must make something happen for them. And then if it doesn’t happen, it’s your fault.”

As women in professional spaces, there are barely any conversations around pregnancy, childbirth, kids, menopause, looking after elderly family members. “As professional pedagogues and theatre directors, it’s almost as if it’s sort of squashed in the cupboard,” commented Fleming in the conversation.

She then went on to describe her research into women practitioners, such as Suzanne Bing, Margaret Naumburg, Marie-Hélène Dasté and Jessmin Howarth, who played an instrumental, unappreciated role in developing training pedagogies of Copeau, Lecoq and Michel Saint-Denis. The European legacies we attribute our learning to today had women at the genesis of it, who existed outside the dominant male frameworks of power at that time.

A deeply enriching conversation followed with those in the room, where women and men shared their experiences of working with theatrical lineages of Lecoq and others.

What does success mean to you? Unrehearsed Futures (Season 2) #10 Planetarity in the Pandemic: Have we lost the moment?