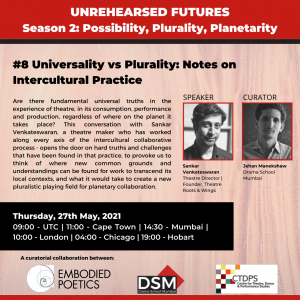 In the eighth session of Unrehearsed Futures (Season 2), renowned Indian director and founder of Theatre Roots and Wings, Sankar Venkateswaran called for a world that moved slower, closer and is more tolerant in a post-pandemic scenario. Quoting a Japanese economist, he added that this can be achieved through theatre and performance.

To explain this further, Venkateswaran gave the example of Japanese performance artist Kubikukuri Takuzo who used to hang himself daily in the backyard of his dilapidated home in a posh locality of Tokyo. “Every month, for a week or so, he would open his garden theatre to the public. Ten people could squeeze in and watch him come out of the house, approach the noose. He would step on an anvil. The anvil was very significant for him. And then, he would hold the noose, and put it around his neck. It was supported by the jaw, so it wouldn’t really strangle him, but was holding all his weight on his jaw. And he would hang. He would just, you know, hang himself and oscillate like a pendulum for say, five minutes. And then the body would come to a standstill,” described Venkateswaran.

He added that it might sound horrible but it was actually very peaceful and quiet watching Takuzo. Going back to the ideals of being slower, closer and more tolerant, Venkateswaran said that it helps him find a way ahead in these tumultuous times.

The conversation had rich offerings from the room where people shared their thoughts on what it meant to create a slower, closer and a more tolerant world through theatre and performance.

The long-form article for this conversation is available on a request-only basis. Write in to info@thedramaschoolmumbai.in to access the same.

Unrehearsed Futures (Season 2) #7 After the Fall: Thoughts on Theatrical Interventions in/from the Global South What does success mean to you?