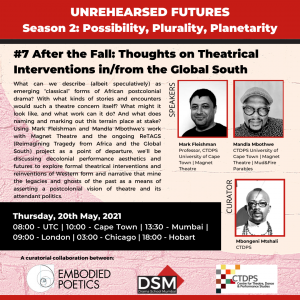 When the Black Lives Matter protests took place across the world year, their impact could be felt in academic institutions around the world, who took up the task to decolonize their pedagogy further. But what does this decolonization of a pedagogy entail for theatre academicians? One of the things it includes is re-evaluating which texts form the “classical” canon, inherited from a European theatrical legacy. For this session of Unrehearsed Futures, South African theatre-makers and academicians Mandla Mbothwe and Mark Fleishman discussed what can be termed as emerging “classical” forms of South African postcolonial drama and decolonial performance aesthetics and futures.

Speaking of the work he does, Mbothwe, a lecturer at University of Cape Town’s Centre for Theatre, Dance and Performance (CTDPS) and co-artistic director of Magnet Theatre in Cape Town, says his theatre has always been in search of healing. “But healing that is based on what has been buried by colonialism and apartheid, when it comes to theatre and performance,” he clarifies. “I think my interest has always been around what I call the excavation of period stories and looking at what intergenerational trauma has done to us, while working with the premise that we are a wounded society.”

Addressing the idea of “classicism” or the “classics” in the theatrical canon, Fleishman, who is also a professor of theatre in the CTDPS and co-artistic director of Magnet Theatre, says that he imagines it in three ways.

“The first,” Fleishman says, “is classicism or the classics as pertaining to the particular Greco-Roman literary dramatic tradition that has been inherited into our context, through colonialism. It is the circumscribed way of understanding the classics. It is taught in our university and in most other South African universities, that the classics are from Greek and Roman traditions.”

The second way is to understand classicism, as something that defines excellence or distinctiveness, that has a timeless significance, a kind of enduring value that becomes foundational over time.  “And the third is classicism as that which is pre-modern, that which the modern emerges from or sets itself against,” describes Fleishman.

In the first instance, he is interested in which Greek tragedies of the 5th century BC were mobilized under colonialism, both by the settler communities and the colonizer communities, and the reaction of the colonized or indigenous communities to them. In the second, he attempts to understand what place this body of works holds in a post colonial, post-Apartheid South Africa. These are just some of the questions that he is exploring through his ReTAGS (Reimagining Tragedy from Africa and the Global South) project.

In Africa, the situation is much more complex because there is no obvious written or literary classical tradition of aesthetics to draw on, like there is in India, for example. However, it has a long history of oral storytelling, song and dance. The question here arises of whether there is a distinction between a traditional form and a classical form. “In that sense, is ‘the traditional’ something owned by a particular cultural group whereas ‘the classical’ is something that is produced by individuals within that group? So, it might be based on a tradition, but it has its own individual manifestation in some way?” Fleishman asks.

Fleishman says that traditional forms in South Africa – which have a classical value of being timeless and distinctive – need to be valued. “And we need to find a way to value these forms relative to the impositions of Western forms that came in through colonialism,” he asserts. “In terms of the definition of classicism as anything that is pre-modern, there is a kind of reduction of these forms to what we might call the ‘folkloric’ or something other than ‘culture’, something other than ‘art’, something that is not quite up to the mark, so to speak. Everything that existed before —in our case, the modern theatre that was introduced into southern Africa— doesn’t quite have the same status,” Fleishman explains.

He further adds that it shouldn’t be about choosing one or the other, but rather focusing on re-historizing, de-linking and creating pluralities to bring forth that which has been silenced under colonial impositions, thus paving a way for a plural-versity where multiple, different kinds of classicisms abound.

In his work, Mbothwe has always gone back to his roots of using the rich, traditional cultural practices present in South Africa for centuries. “That has evolved, of course, through my work, and by realizing the fact that as a nation, as a society and as black people, we are really wounded. Something has been stolen from us, and we have been stripped of our identity,” he articulates, and further adds that colonialism and apartheid were designed to attack the confidence of black people in language, performing art forms and traditional practices that held the society together.

Talking about what constitutes a ‘classic’, Mbothwe remarks that every time he thinks of the word, he is reminded of the legacy that comes from Europe which is perceived to be “bigger and better”. It agitates him that oral traditions and dance forms that originated centuries before colonialism came to Africa are not treated as ‘classical’ forms. “I’ve just discarded the terminology itself,” he says, “I was creating work, not in reference to what it was, but in reference to us searching for that identity, and feeding into that confidence.”

With a search for a theatre of healing, Mbothwe’s work seeks to do so through plurality. His theatre responds to illnesses in the society and at this moment, he is addressing the wound of coloniality through his work. “Not colonialism, but the result or what has survived colonialism. It’s in our system, our academic system, our language. How do we begin to engage with that through theatre in our city?” he wonders.

While dealing with the wounds of colonialism and its products, he is very aware of fighting a losing battle. “There is no way that you can discard or get rid of what we have learned. Something is embedded in us. It will never be innocent from global influences (such as colonialism), no matter how negatively those global influences came to us. It is a part of our identity now,” Mbothwe believes.

“In a way, we cannot seek purity, because we will never have one. It’s quite a waste of time, I think. We will always be interdisciplinary, holding multiplicity as an individual, as a society and as a nation. And we will grow inter-continentally, interculturally and inter-traditionally.”

For healing to occur, it is important to acknowledge that a very important of the nation’s identity has been ignored in existence. “That’s what causes and feeds into the sickness and the violence of our society. It is problematic that a particular dominant language (isiZulu) in our country is not seen as an academic language. We are perpetuating violence on the black body and the black memory. Until we realize that other sources of knowledge have existed and continue to exist, and yet we don’t make them a part of our academia, we are still digging graves for those identities,” Mbothwe says passionately.

Fleishman emphasizes that the wounds of colonialism are woven firmly within the South African fabric and cannot be discarded. “For me, the catastrophe of colonialism, of apartheid, produces a landscape which can be defined in various ways, but I like to think of it as a pile of ruins,” he describes, “And in that ruined space, there are a whole lot of remainders. And those remainders cannot be simply removed, got rid of or wished away. In fact, that produces the tragic sense of the postcolonial moment because you might not want to be there or you might not want to be with the people that you were with, but you don’t have an option. You have to find a way to be together.”

The written versus the oral

One of the reasons European classics hold a privileged position in South African society is that they are written texts passed down through centuries. However, most storytelling traditions in the country have been passed down orally.

“There’s this notion that anything is written down, is more important,” complains Mbothwe. “We place a lot of power in the written word, in ways that delete the orality or existence of something before it was written in a particular part of the country. That’s problematic.”

Due to this emphasis on the sanctity of the written word, Fleishman believes it has hindered pedagogy in South Africa to move beyond it. “Despite the discussions we have, we still conceptually think of actor training in South Africa as beginning with or being determined by a script or scripting process of some kind,” he says. “And the skills that an actor learns are the skills that start from the text. So, it doesn’t matter how much we develop alternative ways of making through workshop theatre or devising. We still, subconsciously, have the idea that what we are doing is making a text, a script, and the ability to free ourselves from the dominance of that script.”

As the conversation comes to a close, Mbothwe emphasizes the wounds of colonialization will take time to heal, and that they must allow themselves the time to reach back into their traditions, their languages and celebrate it. “As South Africans, we know that we are throwing bandages on before even the wound is treated,” he says. “Maybe that’s the tragedy: We will never find healing. But it is in the search of that healing, that we will become better people, that we will get a little bit into the pain that we suffer.”