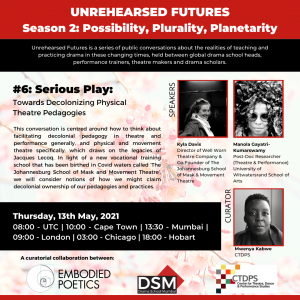 Being locked up in one’s homes for the past year, the pandemic has triggered an identity and perpetual existential crisis (apart from the devastating health and economic crises) for everybody, in some shape or form. Last year, theatre pedagogues and practitioners were faced with working with a new medium – what did that mean for “theatre”? Was “theatre” dead? On a deeper and more philosophical level, the pandemic provided a much-needed pause to evaluate what was working in theatre pedagogy so far, and what wasn’t. It provided an opportunity to reform certain areas and re-think one’s approach to theatre teaching.

One of the things that was widely discussed among pedagogues was finding ways to diversify what is taught, and this happened a lot more when the Black Lives Matter protests took place across the world. Picking up on this thread further, this week’s Unrehearsed Futures conversation centred around how to facilitate decolonial pedagogy in theatre and performance generally, and specifically within physical and movement theatre legacies, such as that of French actor and movement coach, Jacques Lecoq’s.

During the conversation, Johannesburg-based theatre-maker Kyla Davis and post-doctoral researcher in theatre and performance at Wits University, Dr. Manola-Gayatri Kumarswamy engaged with questions linked to decolonization and identifying a pedagogy’s “flavour” when establishing a new physical theatre school.

One of the first things that comes to Kumarswamy’s mind when talking about a decolonial pedagogy is acknowledging the dehumanization of the body and the mind that occurred during colonization. In his book Epistemic Freedom in Africa, renowned historian and decolonial theorist Sabelo J. Ndlovu-Gatsheni argued that colonialism and imperialism denied African people the right to think and write from where they are located, unhindered by Eurocentrism, which led to a loss of knowledges, experiences and their epistemic virtues. Kumarswamy believes that claiming this epistemic freedom involves embracing new forms of knowledge and new ways of approaching knowledge.

“A lot of us believe that these knowledge forms already sit in the bodies of performers, and performance traditions, especially in the South,” she says. “In the Global South, there are also philosophies tied in with those knowledges. And somehow, this epistemic freedom that is sought as part of the decolonial question is deeply linked with the relationship to practice in the body and finding a way to open that cellular wisdom that belongs within tradition but is also present in memory. It is about finding practices that unlock that.” Referencing Yang and Tuck, she also says that decolonization is not a metaphor, or something to be discussed within academic circles. It is a question of land and the bodies that inhabited those lands.

Kumarswamy, who has researched and worked alongside Indian practitioners such as Veenapani Chawla in Pondicherry and Heisnam Kanhailal at Kalakshetra Manipur, attempts to looks at a decolonial pedagogy as a mix of different teachings. “Veenapani said in her theater research laboratory that we can’t go back to a past imagining it is pristine. We can’t only look to the west, which is another move that happens,” she says. Influenced by Kanhailal’s practice, she shares that she deeply connected with his practice of coming back to the Manipuri body and the Manipuri tradition in terms of finding a practice which also linked him back to the theatre of the Earth.

As a somatics-informed performance practitioner, she also believes that creating a decolonial pedagogy is about addressing trauma and loss as well. “And this, for me, again, has resonances for us in the pandemic, and what happens with that loss of control. It is on such an epic, huge scale. Its epistemology is lost, its connections to lineages is lost. And that’s in terms of colonization,” she comments, and adds that performance practices today need to hold how we work through trauma and loss. “And that’s part of what my work does, which moves into embodied knowledges, and believes that creativity and pleasure open up the knowledge and allow for this new subjectivity to emerge.”

“Coming from this training, we know that this work is not sporadic or surface – it really is a physical and emotional, spiritual, possibly even a therapeutic journey towards yourself and towards your ensemble as well,” Davis shares, who has trained in Lecoq-based pedagogy. For her, The Johannesburg School of Mask and Movement Theatre was born out of a dissatisfaction with skimming the surface of physical theatre work. “I think the School has been born out of a desire and a need to go deeper, to commit to real time and real space, and real thinking towards what a long-term physical theatre pedagogy looks like, in the South African context, in terms of movement and mask theatre,” she explains.

Davis, who is also the director of Well Worn Theatre Company, shared some of the questions and concerns that arose amongst the founders of TJSMM in the initial stages of the process. She says she and her co-founders are in the process of acknowledging who they are, where they are and the lineage of where the work is coming from. “If we can just name it and say that this work – as much as I love it and value it, and it has formed me as both a human being and a theatre-maker – it is a predominantly white male, European-led practice, with these almost guru-like teachers, historically,” says Davis, “Or at least that’s what it looks like from the outside to anyone who is approaching this work.”

For her, the biggest task is about finding the flavour of TJSMM, similar to how other international theatre schools in New York, Paris, London or Berlin have their unique identity. “Maybe one day we’ll become world-famous, and everyone will want to come to TJSMM rather than Lecoq or LISPA, but they’ll want to come to us and specifically for our flavour. So, I guess we are asking ourselves, what is that flavour? How do we plait these pedagogies together, along with our context, along with who we are and what our bodies as South Africans bring?” Davis asks.

Mixing tradition into the contemporary

So, to tackle a decolonial pedagogy, what needs to happen and what needs to be done? Kumarswamy says the job is not to answer that question and create a homage of lineages but it is to sit with, sometimes, what will stay as a discomfort, because one cannot solve the problems of caste in a day (in the Indian context). “But it is impossible to not think about, what’s happening to the dehumanised body in practice. How do we hold it even if we cannot solve everything? How do we keep the space open?” she asks.

Davis emphasizes while it is important for those in the Global South to find their own flavours, the reason she mentions Lecoq when she talks of her pedagogy is because the framework has been useful for her and the co-founders of TJSMM. “It is not to worship at the shrine of Lecoq or his lineage but to say, this is a useful framework. It is also a useful code for us as practitioners in that we can gather around this pedagogy,” she says, “And we, as practitioners and teachers, have seen the universality of it, how we can teach it in various contexts, and also how powerful it is as a teaching tool. But at the same time, we cannot treat it as the Bible. It has to move with us and work with us, and we have to pull it apart.” The hope is to take what one needs and build a new scaffold out of it.

For those in the Global South, Kumarswamy feels, the issue is to grapple with the complexity of one’s lineage and how to make it visible. “And the visibilizing of a lineage that we were not quite sure of how much of it we actually inherit, or really know to speak of,” she says.

The danger of accepting a Euro-centric pedagogy as it is, is denying the pedagogy that’s already in the bodies of the Global South. Kumarswamy asserts that each of us already has a rich lineage of pedagogy in our bodies even before we are “trained”. She questions what happens to that pedagogy and how it can find a language through the exercises done. She asks how practitioners and pedagogues can welcome the epistemic weight of such lineage and legacy and create inside people a permission to do that. “And that is I think the epistemic freedom that Ndlovu-Gatsheni talks about – where do you give yourself permission to visibilize and own your lineages and your legacies in the creative way that doesn’t tie you to them, but allows you to be present to the becoming future.”

As the conversation winds down to a close, Kumarswamy says the Global North-Global South binary in a conversation about decolonial pedagogy is not a dialectical trap because decolonization is not a metaphor: it connects back to land, resources and how global economics work. “There is something specific about the Global North. There is something specific about the Global South: what’s available, what’s not available, what’s available in terms of legacy to a white South African, what’s available in legacy to a Xhosa South African. So, for me, the universal cannot come with the dismissal of the context,” she says.