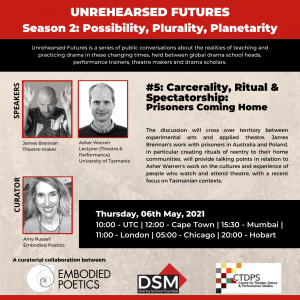 One of the things that the past year has compelled theatre-makers to think about the nature of participation in theatre in physical and virtual spaces. It has compelled makers to introspect the role of theatre in a society.

At the fifth Unrehearsed Futures session, Australian theatre-maker James Brennan and Dr Asher Warren, Head of Theatre and Performance and lecturer  at the University of Tasmania engaged in a thought-provoking conversation about using theatre for social practice and how audiences relate to theatre.

Theatre, justice and The Chat

Brennan, actor, director and composer, confesses that he is an artiste who has an obsession with justice. He trained as an actor and did “uninspired” theatre for many years. He felt that the theatrical tradition in Australia was limited whereas he wanted to create experimental physical works. He began creating his own works early in his career. This went on for 10-12 years when he admittedly got a jolt in the culture around him when he realised there weren’t enough contemporaries around who did what he wanted to do.

“I had a break. I went to Berlin and made music for quite a while. And when I came back, I actually just didn’t want to make theatre. So, I became a parole officer,” Brennan shares.

He admits that it sort of “happened” to him but considers it a life-changing experience. “I guess one thing that was missing for me in the theatre,” he explains, “was a sense of danger or rawness in the work. And I didn’t know this at the time, but when I went into the prison, those two things immediately changed for me. Of course, I made some pretty strict rules. I wasn’t going in there to harvest stories for my own theatre. I was having a break. But I loved it.”

A parole officer’s main task is to interview people to assess them for release etc. You get to know people’s backgrounds and issues and the job is to understand everything that feeds into offending behaviour, says Brennan.

As an outsider, Brennan felt incredibly privileged to get such detailed information about people. “If anyone had handed me those files that I was reading, years ago, I would have just been gobsmacked. There’s so much information about people’s lives and their personal stories. It’s compelling stuff. Of course, it’s attached to a real person. So, it’s obviously very difficult material with real risks involved in their lives,” he shares.

Eventually, he worked at a prison as the parole officer for three years. His task was to assess prisoners for release. “I really had to get my head around where they were at,” describes Brennan, “And that really meant getting to know them quite well. You know, you’ve got different sorts of parole officers. Some of them probably thought I was a bit of a pushover because I was so interested in their reasons, and where they’d got to.”

Everything the theatre-maker and the then-parole officer has been doing for the last eight years is heavily influenced by the time he spent there. He vividly recalls an interview with a person who had been involved in a series of serious crimes. And as Brennan had reached a point of trust with this person, he broke down and confided further crimes he’d committed. Brennan knew he had to report the alleged crimes. “And I was able to tell him that later but what struck me was that the interpersonal relationship between us had got to this point where something transformative was potentially unfolding,” he recalls. “Unfortunately, it was not in my remit to go down that path, to get stuck into whatever was unfolding for this guy. It was a breakthrough, in my opinion.”

As he left that interview, Brennan knew that the offender would not get the right kind of support to harness that potentially transformative moment. As it played out, once he reported it to the police, the psychologists got involved and nothing much came of it for that individual. “I found that terribly disappointing,” Brennan expresses. “The one moment that should be capitalized, where everyone gathers around and pays attention to this moment, wasn’t able to be handled in the system that I was working in.”

This led to the creation of The Chat, directed by Brennan, which was about inventing a utopian parole system. The work was meant to be ludicrous, Brennan admits. The play dealt with what would constitute a utopian parole office. “Dancing, playing, games, sensuality – all the things that you just couldn’t dream of when you’re working in a parole office. It just doesn’t match,” Brennan says. But what came out of it was very surprising. The Chat had three experienced performers, including Brennan, and four ex-offenders on stage. “I worked with training these ex-offenders to be ready for performance with my colleagues. They were on stage every night with us in the semi-structured performance, going into territory which was very difficult for them at moments, but also very uplifting at other moments,” recalls Brennan.

Ten years ago, Brennan would never have imagined himself creating socially engaged art. He believed in ‘art for art’s sake’ and had never felt the need to question it. But his purpose changed when he began working with ex-offenders, he says. “I just could not work out how to ethically start making work with people who’ve been in prison,” he says, “There’s so much. It’s so messy. I knew how messy it was going to be, and believe me, it’s been even messier than I anticipated – the risk to myself and others involved is just a daily reality. And the rewards too, unlike working in theatre that I had done before.”

For several years, some of Warren’s research interests have been about interactive and intermedial theater making, participatory theatre and examining what the present theatre culture tells us about ourselves, and our cultural  values. Over the years, the head of theatre and performance at the University of Tasmania has become more interested in the collaborative nature of performance practice between the audience and performers. “What draws people to the theatre?”, he asks, wondering, “What do they do in the theatre; not necessarily just the artists but audiences?” .

Moving from Melbourne to Launceston, Tasmania in 2018, was a culture shock for him. Launceston is a more regional city with a very different set of attachments to theatre making, expectations of theatre, and ways of valuing one’s work, he says. “And it has been really interesting to engage with this regional theatre culture, because it is remarkably self-sufficient. It’s so powerfully self-contained. It doesn’t need external validation. But what that has meant, for me as a scholar and a critic, is that I’m not necessarily always welcome. And it has been very difficult for me to become a part of this community and to engage with the community,” Warren shares.

Warren first began thinking about people’s attachment to theatre when he had been ruminating on a series of uncomfortable moments. He recalls watching a show in Melbourne where an elderly audience member walked out in the middle of the show. “And I was torn,” he says, “because I felt, you shouldn’t walk out. But you know, just go on. You’ve taken us out of the moment of the show for a pretty self-serving goal, right? Like you’re, you’re doing this for you. This is meant to be about us.” He experienced a “sneaky feeling” which he captured in a paper he wrote titled Can’t or won’t: sneaky feelings in the theatre.

He realized it related a lot to the kind of attachment and expectation “we have, and the willingness that we bring to the theatre to get something from it”. He draws on US scholar Lauren Berlant’s book Cruel Optimism to understand this. “I think the cruel optimism sums it up nicely, because we have such high hopes for theater to deliver us moments of beauty, insights, pathos, and even bathos. And so often, at least in my experience, they don’t happen. I sit through a lot of ‘bad’ theatre. And this is, perhaps, because I sit through a lot of student theatre. But I continually return and sit with this kind of optimism that it will happen,” he explains.

Responding to Warren, Brennan feels such moments in the theatre are compelling, with potential for tension and drama. Going further into it, Brennan says he doesn’t have an answer for what is art for. “But I do become obsessed with what art can do,” he asserts. “And at the moment, I have a social purpose in my work. I know there’s some things you can do. I’ve learned about a few. It can make someone who’s marginalized feel part of something. It can make money for someone who doesn’t make money.”

Adding to Brennan, Warren believes that theatre is good at creating communities, performance events but it also means that people end up in silos, making theatre exclusionary rather than inclusive. “The act of making theatre is an amazing moment of bringing people together with a shared purpose. Because it takes so much energy. How can you not be invested?” he says.

“But for me, the interesting thing about that is that the cohesiveness of that group that comes together, in the groups that I’m seeing around me, are exclusive, and exclusionary. We are separating ourselves in order to define ourselves more clearly as something.”

The conversation also veered towards the idea of finding utopia in performance, even though the performance event may not leave anything specifically tangible afterwards, there is a utopian impulse that allows the audience to generate something hopeful and meaningful just in the act of gathering together. Warren shares an anecdote where his friend couldn’t explain why he was disappointed in the show. “He was puzzled and spent the time interrogating himself and interrogating what he saw, to process his thinking. And I was at that show, too,” says Warren, “And it was an  under-done work. It wasn’t fully fleshed out. It really needed more time and development. But he felt bad in that moment for not having a good response to it.  I was struck by him feeling bad. That’s the manifestation of the utopian, theatrical impulse where you’ve internalized this desire for a show to be good, so much so that you are kind of pained by it.”

Brennan, however, feels that the social contract changes between the audience and the performer changes when there is a social purpose in the piece of work, which has to do with the ambitions of the work itself. “When I talk about utopia, I’m really talking about the attempt to jump past a problem. Because I can do that. You can launch yourself beyond the usual obstacles to a possible answer. And you don’t have to get involved in all of the obstacles. That’s what I’ve been doing with some of the former prisoners is that we don’t have to focus on their offending, we can just leave that completely out and get them to focus on their positive traits. Now, you can’t do that in prison. But that’s utopian,” he says.

Instead of calling something “bad theatre”, Warren says he should  use the term “unthinking theatre”, as the issue he wants to describe is more specifically about theatre that does not engage thoughtfully with its audience, participants, or subject matter.

As the conversation comes to a close, Brennan envisions a future where theatre exercises become a tool to reach ex-offenders. “The life of an artistic work, as we all know, has limits. It comes and goes,” he says. “And it doesn’t really necessarily mean much socially. But if you can crystallize something into something that’s applicable, then you can gauge what you’re not able to gauge inside the art making process.”