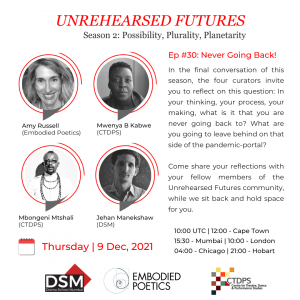 Did another year just go by? It seems like it was only yesterday that we were hit by unexpected lockdowns in the tumultuous year that 2020 was, and yet here we are, bidding adieu to another year of disruptions, love and loss. The last two years have changed the way we think about theatre and pedagogy. As we looked over our shoulder at what we’ve passed, we, at Unrehearsed Futures, lingered a bit longer and reflected on what we’ll never go back to in our thinking and process as we head into the new year.

At the final conversation of Season 2, we invited all the participants in the room to share their ruminations and if the practices they leave behind bring about a sense of lightness and what it allows them to do.

Entering the space with curiosity

American playwright Kamili Okweni Feelings unpacks what it means to never go back to something and says there is a sense of finality and permanence to it. For him, he is never going back to commercializing his art. “I find myself, creatively or imaginatively, not wanting to do the same things that I might have wanted to do for attention or for the sake of someone seeing my talent or for someone saying, ‘You’re special’,” he shares. “I don’t think I could go back to the notion of art as something very different from what is made within the audience when you’re sitting there, watching something that inspires you. That’s where an artist is formed – from their imagination getting stoked by a lot of different things, from outside of them. And then something starts to grow from the inside. So, it feels like a very spiritual connection between me and another person.”

He also adds that he will not go back to the notion of safety in an artist’s eyes. “I don’t think that exists,” Feelings says, “I think that’s another form of propaganda that puts you into a nice flow of information. And you can become whole from it. But I don’t know that’s the same as doing something that really is inspiring and, potentially, like rolling down the hill.”

The pandemic was also a time where pedagogues found themselves in a strange place of not having all the answers. Carol Rosenfeld, a New York-based acting coach who has been teaching at HB Studio for nearly 50 years, admits she is never going back to thinking she knows anything. “I have learned how much I do not know. I will just go into the space every time with incredible curiosity about the other and not so caring about myself. I think that’s been a very transformational time,” she says.

Similarly, Bangalore-based actor, maker and DSM faculty member, Tushar Mathew, has been thinking a lot about not going back to the idea that students are kind of passive recipients of information. “I’d rather that they also can be empowered to be able to articulate how they can be the best possible learner in a classroom. So, I would never go back to this kind of one-size-fits-all way of teaching,” he says.

Mathew also mentions that his work and interest in theatre has been living separately from his interest in the environment. “Especially now, I feel like actor training that doesn’t also talk about curiosity, attention and focus on our ecosystems and our natural world, isn’t a sustainable way of moving forward for me. I can’t go back to having environment work and actor training work or creative work live separately. Those two things have to be together,” he shares.

‘Having fun at least once a day’

A new and welcome change for Franc Chamberlain, the founding editor of the Routledge Performance Practitioners series, was leaving his full-time post at university. “I’ve worked in universities for 35 years,” Chamberlain shares, “and haven’t for the last 18 months. I’m not quite sure what I’m doing. But I don’t think I’m going back. That doesn’t feel like the right thing to do. But what it has done is because of all these changes, it’s opened a lot of questions and choices to be made.” Chamberlain now prefers to do things for fun, he shares, instead of worrying about research assessment exercises, excellence frameworks or meeting any funding goals.

Speaking of ‘fun’, Mbongeni Mtshali, lecturer at CTDPS, University of Cape Town and an Unrehearsed Futures co-curator, shares he is never going back to the rat race that comes with being in academic institutions. “I want to find time to and be okay with slowing down, to decelerating and being okay with stillness,” he remarks. “I realized through a lot of these conversations, that there’s something vital and politically powerful about taking a big deep breath and sitting down and being okay with just pausing. I’m trying to find ways of using the pauses to be okay with having fun, finding joy, finding pleasure, and recognizing that finding joy and pleasure is also a deeply political act in our context.”

The past two years have compelled people to pause and rethink their work-life balance in this pandemic portal. To this end, Sophia Stepf, artistic director of Berlin-based Flinn Works, shares that she is committed to not going back to workaholism. She promises to “have fun” at least once a day. “I’m never going back to working 40 hours a week,” she states. “And I’m never going back to not having fun once a day. Maybe it’s because I’m hitting 45 (years) and I feel life is getting shorter. I have a feeling that if I don’t appreciate the snow that’s come today, or, being healthy today, or not prioritizing the moment of joy every day over work, even that if that means I won’t be successful – I don’t know what success is anyway – then I might regret it at the end of my life.”

Avoiding the ‘false valley of horror’

Living in this period of time has been about reclaiming oneself, teaching ourselves how to love as we are. In September 2020, Melissa Eveleigh, founder and director of Arts for Action, had a breakthrough where she realized that she no longer wanted to do something that didn’t bring her joy, pleasure or didn’t feel good. “After working for 20 years, I really resonate with that,” she says. “If I sit still, something will emerge.”

Eveleigh feels this is wisdom that one hears throughout their career and life. “Before last year, the notion of a kind of artist that lives a relaxed, calm, peaceful, sedentary life where they don’t have to consistently scramble and be a thousand roles at once to make things happen, was completely insane to me before last year,” she shares. Eveleigh recalls how she was led to believe that it was not about the artist, but about the work, that the art was bigger than the artist, and that an artist need not worry about themselves. “Those two things are completely false. They lead you down a very false valley of horror,” she says, as she reclaims the space to care about herself.

Mwenya Kabwe, lecturer at CTDPS, University of Cape Town and an Unrehearsed Futures co-curator, seconds Eveleigh and says she will never go back to the “false valley of horror”. She describes herself as a teacher, facilitator and professional theatre-maker. One of the things she doesn’t wish to go back to is separating these parts of her professional practice.

“I have had a fantasy about how these things can come together. That has felt unrealistic because each of those fields are separate industries,” Kabwe says. “I feel very strongly that that separation is an unnecessary split. It’s not cool. And it’s so much more fun to think about combining them.”

For Sanjukta Wagh, co-founder of the interdisciplinary initiative Beej, she is never going back to “standing on a ground that is either inherited or borrowed”. She admits it is hard work. “But I’m going back to owning my ground and standing my ground with my two feet. And it’s going to be a journey to get there. I’m tired of fitting in to what I identify as largely toxic spaces. So, here’s to creating new spaces,” she declares.

The invisibility of the virus definitely drew our attention to humankind’s powerlessness, the hubris bolstering global capitalism and the arrogance involved in how we treat our resources. As we move through this space of perpetual disruption, we hope to continue disinheriting ideas of success, how things should be and instead tune in to listen to ourselves and our fellow collaborators.