Unrehearsed Futures (Season 2) #29 Moving Through These Times With Curiosity, Care, and Community 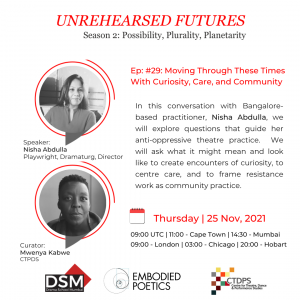 Going through this pandemic has been an isolating experience for many people around the world. As we emerge at the other side of the portal, there have been several conversations around creating communities of care and curiosity. At a recent Unrehearsed Futures (Season 2) session with Bangalore-based director, playwright, and dramaturg, Nisha Abdulla, we discussed what guides her anti-oppressive practice. What does it mean to centre the dissenting body? What does it mean to listen to the body as the site of resistance?

Abdulla says she draws her practice from multiple traditions, and she arrived at the phrase “anti-oppressive theatre practice” because she was unpacking her own needs in the urban Indian theatre ecosystem.

She was in her late 20s when she was able to identify things that made her uncomfortable. At that time, she didn’t have the language to articulate or speak about these things and sometimes, no spaces in which she could speak up. “Often, young, aspiring theatre-makers like myself would talk about the things that were jarring for us – legacy behaviours, very conditioned thoughts about what theatre is, what it isn’t, the boundaries, the lines. There was also a certain kind of body, experience and social background that made up the theatre ecosystem,” she explains during the conversation.

Due to this, in India, one saw a certain kind of theatre on stage all the time. “Caste is very alive in India. Even in urban India. There is no place that it doesn’t touch. It touches the theatre as well,” says Abdulla. In the midst of this, she is a woman, who also holds the minority Muslim identity, making theatre at a time in India where this is inescapable given the political regime that is in power. “All of this was entering the room when I began to lead rooms as director. At certain moments, it was quite excruciating to find the language and the space to unpack that because there weren’t many journeys to look up to and learn from,” she adds.

Come as you are

The Indian theatrical tradition is rich with dissent but a lot of them were inaccessible to Abdulla, due to language or location. Dealing with her complexities and contradictory realities led her to encourage herself and others to be able to come into the room as themselves.

“It’s as simple and as complicated as it sounds,” she elaborates. “It’s being able to come and see yourself. While I was still learning, as a performer in other directors’ rooms, there were large parts of myself I had to keep outside. To come as yourself necessarily means, that there is a recognition and an acknowledgment of multiple needs in the room. So, the basic tenet of an anti-oppressive practice is o come as yourself.”

It’s not like Abdulla has been challenged with every kind of need in the room. She confesses she is still evolving her practice as she holds the space. She articulates an important distinction she has arrived at in the last couple of years: She now prefers to hold space as a director as opposed to leading the room as a director.

“This realization is heightened by the pandemic as well,” she says. “Suddenly there was this pause, a forced pause on the rigmarole of production – rehearsal, research, production, rehearsal, research. That had stopped and there was just too much to reckon with. So, I think, post-pandemic there is a different kind of clarity. And the rooms that I’ve held space for after, have seen a blending in all of this.”

The dissenting body became key to co-creating support. Abdulla says she draws this idea heavily from her personal experience. “I come from a social background, where being in the theatre is unheard of. Being in the theatre as a woman is unheard of. I’m also entering a space where there is a certain kind of experience that is given primacy to. So, it meant bringing these realities in the form of new writing, experimental ways of leading the audience into this experience. The dissenting body became the centre from which the theatre making grew more into itself,” she describes.

Developing an anti-oppressive approach to theatre

When she began her career in theatre, Abdulla had a certain idea of what political theatre must look like. She had to unlearn it and find the confidence to say “this is not me, and this is not what I’m interested in.”

Developing an anti-oppressive body of work has been about giving herself the permission to state and articulate these things. Those have been some of her biggest struggles, Abdulla states. “For example, not being weighed down by the proscenium and telling myself that I will create space within community. This meant that there was a certain aesthetic and a certain limitation of form that came into the picture. Developing an anti-oppressive practice meant realizing that I’m driven by the pursuit of bringing a certain kind of theatre and provocation into the community.”

The year 2019 was transformational for Abdulla because it became clear to her that her theatre-making needs to be simpler and portable. She let go of the idea of scale in her productions. She recalls that during her first production, the play had huge sets. At the time she believed she had to give in to a certain kind of theatre that she felt she had to make. A big part of letting go of that notion was to let go of the idea of scale and instead, to look at the idea of impact.

“That has been hugely important,” Abdulla declares. “Even now, with the two productions that we’re on the floor with, these questions are very alive. What are the spaces that we’ll be taking this to? And remember, we are in an ecosystem where one has to create these spaces. Right now, some of the most prolific directors and actors in the independent theatre system are performing in people’s homes.”

The rigour and the craft remain. That is open for all kinds of critiques and criticisms. And I rely on my peers to be able to draw that out from me. As someone who does not have an institutional degree, I rely on that quite a bit. But it’s a much healthier relationship now, and that’s very important to me,” she explains.

Abdulla herself is a well of contradictions, which she says helps her “breach some bubbles”. There are entire ecosystems in the Indian society that live without acknowledging each other due to caste, class, religious and language divides. One can live a lifetime without acknowledging the bubbles. “I think those of us who are able to operate in the middles, are able to take on this responsibility of introducing one bubble to another, with the purpose of allowing some conversation, some touching, some acknowledging. Just acknowledging each other itself is often a big win,” she describes.

During the pandemic period, Abdulla has been centering curiosity in her practice. It came from her continued work with younger people and being able to observe them. “This thing of curiosity really came from being active in that space. There is a certain ease with which another reality is absorbed by younger people, which we lose as one grows older and crankier,” she shares.

Cultivating curiosity also challenges one to approach extreme polarities without shame or rage. Abdulla describes her work with children from marginalized backgrounds who had immense curiosity for the worlds outside their slums and ghettos, but that curiosity was coupled with a lot of shame at their reality. “And so, as an educator in that space, often the task was to ground into that curiosity, and untether the shame from that. I have often failed, because they come with a lot of conditioning about their realities, and there is a lot of inherited shame about their reality. But in the times that I’ve had much longer interfacing with them, and much deeper work, I’ve seen what it can do,” she says.

As the conversation comes to a close, Abdulla emphasizes on the need to move away from a “male, supremacist lens” of making theatre and instead put into practice a needs-based approach to theatre-making that is inclusive of all. “There is a certain kind of body that one expects to see onstage and to move away from that itself is deeply liberating. All the rigour and discipline of theatre should sit firmly under this need to acknowledge whatever’s coming up at this point. That is why come as yourself – to have that space to call in other bodies in the room and say, ‘This is my present need, we need to pause.’ It is really liberating to be in that space, even as the director or collaborator in the room.”

Unrehearsed Futures (Season 2) #28 ‘Fishbowl’: Performance Makers on their Experience of the Feminine Trans-ing The Theatrical Canon