Unrehearsed Futures (Season 2) #27 A Dangerous Position to Speak From: Practicing De-colonisation from the Global North 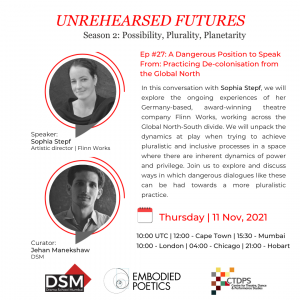 Over the last year, the pandemic exposed many fissures within our society – oppression, sexual harassment, questions of equity, inclusion, diversity and much more. Decolonization has been a major topic of discussion in theatre communities over performance and pedagogy. Even today, countries may be independent but colonial structures still stand in place in theatre organisations.

What are inherent dynamics of privilege and power at play when a Global North practitioner practices decolonization? At recent Unrehearsed Futures conversation, German theatre-maker and artistic director of Flinn Works, Sophia Stepf shared her ongoing experiences of working across the Global North-South divide.

“My name is Sophia Stepf. I was born to white German parents, both teachers in a small town in central Germany. I have a younger sister and a German passport,” thus began Stepf. Germany’s passport is the second-most powerful passport in the world and ranks first in the European Union.

Stepf acknowledges her privilege as a white woman born and brought up in Germany before delving into how the arts funding bodies in the country treat her partner organisations on projects from the Global South differently to her. She acknowledges her access to a good and free education and completing it without any debt. She has been able to work and earn her living in the arts sector for the last 18 years.

“I’m not wealthy by German standards. But on a global scale, I am,” admits Stepf. “I understand discrimination only because I’m a woman and a mother. From these experiences of these kinds of discrimination, I can stretch my imagination to understand other forms of discrimination. But it means active engagement from my side; it’s never ever complete.”

She also shares her experience of being sexually harassed when she was in India because of her white skin. “Or because of my gender and my white skin, or because only of my gender, I don’t really know. But in any case, this is minor compared to not experiencing racism all my life. Maybe, being occasionally sexually harassed on the street helps me feel the potential scope of racist micro aggression.”

“I have entered many working relationships and projects where the majority of the funding, if not all of it, came from Germany,” she says, adding that many a time such funding has come with German rules of administration.

“I frequently witness how my partners are not considered equal by the German system, not equal to me, how their organizations are not trusted with administering funds, how applications and excel sheets have to be in the German language, how the money comes with many strings attached and how it creates problems in the working relationships from the start. How can we meet as equals if nothing in this project is equal from the start?” she states.

In 2016, Flinn Works, in collaboration with a Tanzanian company Asedeva (in Dar es Salaam), created a project called Maji Maji Flava, which took the Maji Maji war (1905 – 1907) of the Tanzanian resistance against German colonial rule as its point of departure.

How did they even get to make this play? Stepf shares that a few years ago, they had the luxury to travel to Tanzania to conduct a workshop where they met many people who asked if they knew about the Maji Maji war.

“We didn’t,” Stepf says. “We were ashamed and shocked at this complete lack of knowledge about a part of our own history.”

Stepf stayed in touch from one of the artists from the workshop and a few years later when the German Federal Foundation put out a huge funding scheme called TURN Fund to foster collaborations between Germans and artists from African countries. The funding application, however, had to be handed in in German, along with the financial plan.

“No amount of the relatively big funds we received could go to our Tanzanian partner. We had to write individual contracts with every single artist we worked with, instead of giving it to our partner organization,” she describes. “They were bilingual – in English and German – but German was legally binding language. And, of course, our partners only understood the English and they couldn’t check if the German was correct.

Stepf and her colleagues continued the work. They worked through it by openly discussing it with their Tanzanian partner. “We sweated and cried and hated each other for a bit. I think all of that happened in this process. And we managed to create half a show. We rehearsed it and we were able to show it to theatre students and professors at Bagamoyo, where we were hosted in Tanzania,” she says.

At the end of one of the shows in Tanzania, one of the audience members told Stepf and her colleagues that they should apologize. At that point Stepf was hesitant. What does it mean for artists to apologize when they are not politicians? There was a lot of debate among the group over this. “And then we realized, let’s do what we usually don’t want to do, because that’s always the interesting point, to go over your own resistance. At that point, we thought we are artists, not political activists. But I think during the performance, we became political activists, and today, some of us also consider ourselves as political activists and artists,” she recalls.

Stepf reflects on why she does theatre and what it even means today. She says that doing Maji Maji Flava was particularly useful beyond art and showed the audience something that was necessary to get out there. “And it was useful for larger political discourse because we need to decolonize our institutions in Germany,” she adds.

“We made this project with a flawed and unequal administration of funds. And I consider it to be a successful project. But that is also my dangerous position that I speak from that I will rather use a bad system and make something than say that the system is bad and not make something. I would rather get dirty in the muddy ethical grounds and create,” Stepf asserts.

The German theatre-maker also reflects that for her and most white people in the arts industry to work across the borders of the Global North and Global South means they can never occupy a moral high ground. “We are historically implicated. We are debatable. We profit day to day from powerful passports, cheap coffee, chocolate and T-shirts. We were raised in a racist and a sexist system. Our minds were and are shaped by the system. Our wealth is questionable. We live deeply unethical lives, and we carry responsibility. For me personally, that is a necessary acknowledgement before starting to work.”

Stepf believes it is important to stretch the frays of arts funding regulations. In the German system, she often finds herself functioning like a bureaucrat, a position she does not prefer. She feels it is necessary to be straightforward with the whole process where applications are bilingual, for example, so that it is accessible.

What is also crucial is feeding back to the funders. “I think strong feedback is necessary to the funders all the time. And feedback from everyone who gets the fund, and then stretch the boundaries as far as possible,” she says.

Stepf also questions why do such projects have to always create something that works for a German audience? Why does such creation mean that complexities and content have to be dumbed down for and cater to a German audience? “It means that a lot of artists that we work with, they would rather work on something for their audience without Germans. I totally understand that,” says Stepf.

When she talks about stretching the boundaries and our imagination, she means extending one’s empathy and curiosity to understand the other partner’s concerns. Under German funding rules, you are not allowed to pay for taxis for travel, says Stepf. But the chance of her black colleagues experiencing racism is much higher if they use public transport. “And I’m not talking about violence,” she explains. “I’m talking about looks, words, something that might not put you in a good position to even perform a show. You don’t know what’s coming your way when you’re in a country where you don’t speak the language, and there’s racism out there.”

As the conversation comes to an end, Stepf also emphasizes that the responsibility of educating herself about, say, her black colleagues’ experience of racism, is on her, not them. And that we must read literature and push back and make space for others. “White people have a responsibility because we are in the system. We are the ones who have to sit down and Google and get an education about it,” she asserts.

Access the entire session: The video recording for this episode is available upon request. To watch, write to info@thedramaschoolmumbai.in.