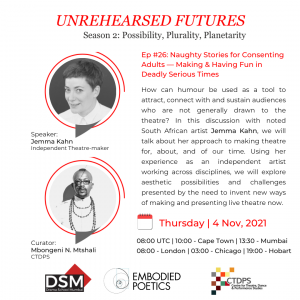 “Once upon a time, long, long ago, on the steeps of a distant mountain, 100 miles from anywhere, in a little ramshackle hat, there lived a Zen master,” begins Jemma Kahn, while she deftly slides bright visually illustrated storyboards from what looks like a wooden television box.

The Zen master was known for his wit, wisdom, corpulence, but not his patience. He was sitting down to have his delicious carp for lunch, when a breathless visitor approached his doorstep and introduced himself. “My name is Ekido and I have walked 100 miles to seek your wisdom, great master,” narrates Kahn in a raspy voice. Akido shares that despite following a noble path all his life – doing meditation for 8 hours a day, observing a vow of silence for 7 years, fasting for 60 days – he finds himself no more enlightened than a child. He says: “I do not understand master. Nothing makes any sense. What is the meaning of it all?”

The Zen master narrates a story of his own to Ekido and tells him the tale of a carp who was caught by a fisherman against his wishes, slammed against a stone until he died and cooked on a fire riverside. Ekido is confused and says: “Master. I do not understand your story. Forgive me, but it seems to make no sense.”

“Yes, and such is life. Now will you fuck off please while I eat my lunch?” Kahn cheekily narrates in the Zen master’s voice.

What Kahn, a South African independent theatre-maker, shared above is a performance from one of her productions, Epicene Butcher and Other Stories for Consenting Adults, which is a series of stories shared through Kamishibai, a Japanese street theatre and storytelling form.

Kahn, who has created works such as Cellist with Rabies, We Didn’t Come to Hell for the Croissants and The Borrow Pit, often uses Kamishibai in her plays. A form that can be traced back to around 12th century, a Kamishibai performer travels with a wooden box and their storyboards on a bicycle and performs stories for people for free. “Kamishibai is traditionally a medium for children,” she says. “It is such a beautiful transformation of when you read a story to a child or to a group of children and then you turn the book around and show them the pictures.”

Kahn was first introduced to Kamishibai when she lived in Japan for two years. She bumped into a Bunraku puppeteer and Kamishibai performer and watching the performance, she felt, “It just knocked my socks off. I loved it so much.”

She came back to her town near Hiroshima and told her friend about it, who introduced her to a local Kamishibai performer and thus Kahn began her journey with form. She performed with the local performer, who taught her how to create the illustrations. Kahn also says she learnt a lot by watching him, “I learned the size of a narrative performance. There is an amazing magnetism of this little wooden television that has been around since the 12th century, in some or the other iteration.”

Though traditionally performed for children, Kahn used the form to tell stories for adults. “I made the story for adults, just because I’ve never wanted to make theatre that isn’t slightly perverse,” she admits. What is unique about Kahn’s theatre is that she marries a wondrous, child-like form like Kamishibai with a levity and irreverent humour to address more mature audiences or work with more mature subject matter. It allows her access in a way perhaps that may not be possible or effective in a more conventional theatrical stage.

When Kahn made Epicene Butcher and Other Stories for Consenting Adults for South African audiences, most did not expect it to succeed. And yet it did, in a surprise to all. One of the reasons Kahn thinks the form and content worked well is that Kamishibai was a perfect medium to share stories – horrible stories. “You can handle a radical piece of content if it’s 5 or 10 minutes,” she says. “The shows (of Epicene Butcher) that I did, initially had seven stories that gave you a little flavour of all sorts of things. And so, I think, you can go a lot further if you do it in a short amount of time.”

What Kahn also loves about using Kamishibai is that the wooden box acts like a mask between the audience and the performer. “The box functions as a mask between the audience and the performer, giving a kind of safety barrier – like a condom – to everyone because the contract that you enter into, in the first place, is not real,” she explains. “Going to the theatre, sometimes we are asked to suspend that. And here you aren’t. This isn’t real. You can get stuff that might be incredibly upsetting if it were to deal with the actual human body. You can do in the box. You can be very violent, you can be very sexual, and completely bizarre. And you can get there quickly.”

Kahn doesn’t think of herself as a “mollycoddler” or “someone who would treat the audience with kid gloves”, but she admits that without the safety and the intimacy of the wooden box, audiences won’t respond to her stories. “The audience needs to be coaxed or tended to, even if they’re unaware of it, so that you can really get into nasty stuff. The magic is the intimacy, and the fact that the audience knows that you are you and not a character specifically,” she says.

“And I love watching the audience, because often audiences are frightened when you look directly at them. So, you ease them in: you make eye contact, and then I love seeing the audience’s eyes drift away from me into the box. And then what I really love is when little old ladies fall asleep, that they feel so at ease that they nod off.”

Kahn’s work seems to have an undercurrent of levity and irreverence, not necessarily “haha humour”, which sets her apart from her contemporaries.

When she came back to South Africa from Japan, Kahn found that there was a very staid fashion of theatre making at the time. “You would go to the National Arts Festival and see almost the same play over and over and over again, which was very sober. The tropes which South Africans seem to be obsessed with is all the really hard stuff. It’s incest and rape, and its murder and all of those are within the canon of theatre. But I don’t think you’re going to get an audience to remember them,” she laments.

Humour as a tool helps slow things down. It introduces speed bumps along the way, between the moment of experience and the compulsion to intellectualize it as something of great importance.

“I think the intellectualizing separates the audience and the and the performer whereas humor unites you,” she reflects. It is about playing with the audience and feeling them out, befriending them before getting to tease them.

And this is where Kahn stands apart, for she gets audience members who would usually not go for a theatre show. She describes herself as a performer, an entertainer. “I don’t think of myself as an actor. As an entertainer, you can sit within that realm of cabaret, comedy and music. And that’s why I think it works so well at festivals, because people are there for the joke. They’re there to have a good time. And then you can slip them the cyanide pill without them noticing,” she explains as the conversation comes to an end.