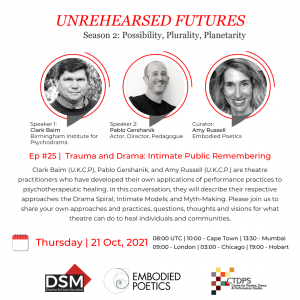 What does it mean to reconstruct any life event through theatre? What might be some of the dangers or pitfalls of applying theatre to a therapeutic process? Answering these questions and more, theatre practitioners and therapists Clark Baim and Pablo Gershanik shared their practice and methods in a recent Unrehearsed Futures (Season 2) conversation with co-curator Amy Russell.

Baim, a psychodramatist and director of Birmingham Institute for Psychodrama, worked with applied theatre for the longest time in UK and US prisons before moving on to study psychodrama. He also holds a PhD from the University of Exeter, UK. In 2020, Clark published Staging the Personal: A guide to safe and ethical practice (Palgrave Macmillan). The centrepiece of that book is the Drama Spiral – a model Clark devised to help theatre and arts practitioners to maintain safe and ethical practice when staging personal stories.

Similar to how Baim developed his own method, Argentinian actor, director and pedagogue, Pablo Gershanik also created his Intimate Models methodology. He describes himself as coming from a country and generation that suffered a lot of violence during the 70s, specifically, traumatic experiences – personally and socially. “I come from a family that suffered a lot with that,” he says. “A few years ago, I decided that I wanted to work on this idea of what does it mean for a person, for a family, for a community to reconstruct a tragic event.”

After years of working in the field as a psychodrama psychotherapist, where Baim used elements of drama in therapeutic processes, he became very aware of issues around safety, ethics and boundaries, in how one helps people to stage their stories.

“I went out in the field, and I watched lots of productions that do this sort of work. And I became aware of very good practice, and also some very risky practice, where I thought people might be very fragile and sharing stories in ways that made them very vulnerable and left them in a very vulnerable state,” he shares.

And so, he created his model ‘The Drama Spiral’, which he detailed in his 2020 book Staging The Personal: A guide to safe and ethical practice. The book delves into the history of such work, the ethics behind it, the methodology of the Drama Spiral and intentions of working with people’s personal stories. Baim also offers a lesson plan on how to teach the Drama Spiral at the end of the book.

The issue at stake is that contemporary theatre has crossed boldly into therapeutic terrain and is now the site of radical self-exposure. Baim notes that the one of the first companies he could find who specifically mined tricky and dangerous material from their own lives and put it on stage for audiences was a US theatre company called ‘It’s All Right to be Woman’ in the 1970s. Since 2000, there has been a rapid expansion in the use of people’s personal stories in the theatre – in both applied and commercial theatre contexts.

“Given the highly personal nature of much of the material that’s being used in such processes,” he says, “my take on this is that it’s imperative that theatre practitioners interrogate the ethics of this work and develop models of practice that maintain sound ethics, stay within appropriate boundaries, and avoid exploiting and harming participants, performers and audiences.”

The Drama Spiral consists of six rings, each representing a certain level of sharing and performance –

Baim also advises that theatre practitioners who work with stories of unresolved difficulties should also have extra training in trauma-related responses, and should be prepared to work with groups over time. Where there is good practice using the sixth ring of the Drama Spiral,
such theatre projects tend to be long term. “They&#39;re not just mining this material, staging it and moving on. They&#39;re working with those groups of people over significant periods of time.”

Gershanik developed Intimate Models as a response to trauma he experienced in Argentina in the 1970s. The methodology wonders about resilience through art. What does it mean for a person, for a family, for a community to reconstruct a tragedy? Is it going back to ground zero of the nightmare, to organize the splinters of the wound? Or is it that reacting to a tragic experience means to retell the story, to knead it, to reinvent it, and to share it until the poison is dissolved?

In Intimate Models, Gershanik tackles traumatic experiences through visualising them into physical 3-D models that participants/performers create. “I always trust and rely on the healing power of fiction,” he says. “I think the possibility of creating metaphors, the possibility of transforming a painful event, an invisible wound through a metaphorical way of expression allows us not to just transform the way we talk and the way we live an experience, but the way we share that with a community. The point is not what happened to us, but what do we do with that? And that is where fiction and metaphor are transformative.”

This process of “modelisation” arose as a tool of aesthetic transposition to work with cases of social trauma that a person, family, or a community have suffered sue to war, terrorist attacks, social struggles, migration, etc.

While methodologies such as the Drama Spiral and Intimate Models have can help people transform their pain into an aesthetic expression, Gershanik and Baim both caution that there can be several pitfalls in using theatre techniques for psychotherapeutic healing, if it is not done properly.

Baim mentions that one of the things to keep in mind is who is coming to watch these shows. How will it be received and interpreted? “Will it leave the control of the people who are sharing that? Will it go onto social media? Will it go into the newspapers as part of a theater review etc. That’s a big issue,” he says.

The other large issue, Baim says, is that makers need to avoid re-traumatizing the people who have gone through that experience. “I have seen instances where I have seen audiences in the theatre being so appalled and so overwhelmed by unprocessed material that they themselves have been left very vulnerable.”

Gershanik also adds that it is important to recognize what one is working with – a wound or a scar. “When we have the wound, there’s nothing we can do with that but share that experience. In order to work, we need to pass towards these other parts of the process, i.e. the scar.

And I think that has to do with what Clark calls the celebration, this fifth ring of the spiral,” he says.  “Even if it sounds difficult, there is a lot to take from the possibility of celebrating what happened – to use that as a clue, as a creative model, an imaginary space to gaze at the horizon, the future, and to go beyond our personal conception of what happened. By creating this metaphor, transforming the nightmare into a dream somehow, we also prevent future generations from being poisoned by what remains of this tragic mood or this tragic poison that is always dripping down in our stories.”

As the conversation comes to an end, Baim emphasizes that if one is using dramatic processes to deal with trauma, it is important to do it towards hope and healing. There is a catharsis in aesthetic transformation. “The pain, the suffering – whatever it is that we’ve experienced, is transformed through aesthetic processes. Perhaps into images, or expressions of energy, of beauty, of hope, of communal activity, of collectiveness. That can be done so beautifully in the theatre because it is such a collective process,” he explains. “We might end a psychodrama with a dance, for example, or a song – a communal expression of hope, a new way of being with other people.”