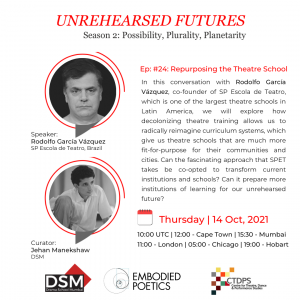 As we move through the pandemic, embracing a post-pandemic future, how can we reimagine theatre pedagogy for the 21st century? What does it mean to create a theatre school in response to the local community it is situated in? Can theatre play a more direct role in building a good society?

Taking inspiration from Brazilian pedagogue Paulo Freire’s principles, in which ‘those who teach also learn, and those who learn also teach’, Rodolfo García Vázquez and 11 others co-founded the SP Escola de Teatro in São Paulo, Brazil in 2009.

“In order to shape the schools for the next century, we have to unlearn everything we learned about what a school is, so that we can have a new perspective for what a pedagogy for the future can be like,” he expressed at a recent Unrehearsed Futures (Season 2) conversation.

Vázquez, who is also the founder of Os Satyros theatre company, came back to São Paulo in the year 2000. The Brazilian theatre group found its home in the city centre, at Franklin Roosevelt Square, an area notorious for its high crime rates, drug trafficking and prostitution. It was considered to be one of the most dangerous areas in São Paulo.

When they arrived, Vázquez began working with inhabitants of a poor suburb called Jardim Pantanal. “In this area, young boys and girls didn’t have an opportunity to learn any professional or have any technical skills. So, we started teaching sound operation and light operation, and some of them worked at our venue,” he says.

The Os Satyros group quickly became aware of the social potential of such training. The theatre scene in São Paulo grew in the 1990s and 2000s began growing due to economic and social development in the country. But, apart from acting schools, there was no other stage arts training school in the city at the time. In 2005, the then-mayor of São Paulo José Serra came to the Os Satyros theatre and got to know about the projects they worked on. Vázquez and Ivam Cabral, the founders of Os Satyros, shared with him the need to develop a theatre training school with a social bias of accessibility to poor youngsters.

Following this Os Satyros brought together a group of local artists from all aspects of theatre-making to imagine the theatre school of their dreams. “During the three years, 12 people group met regularly to plan the school and this was our question: What was the school of our dreams? In which school would we like to study?” he shares.

“We learned, from the beginning, that all the areas must be respected, and all the artists involved in any project must be respected. This made a huge difference in our project, because we learned everyone is important in the creative process of performance, and the collaborative sense of the production became very strong for us.”

In 2009, the Association of Artist Friends of the Square (Associação dos Artistas Amigos da Praça) was recognised by the State of São Paulo government as a social organisation and the project became publicly funded. SP Escola de Teatro was developed under this.

The school began in 2009 with 200 students – 25 each in Direction, Mime, Acting, Dramaturgy, Scenography and Costumes, Lighting, Sound Design and Staging Techniques.

“The principles we had were based on democratization of theatre and accessibility,” says Vázquez. “Many of our collaborators in the school come from vulnerable groups. For example, all our receptionists are transvestites or transsexuals, most of whom were in prostitution. Some of them left the reception desk and went into pedagogical department or library. So, they studied and we help them study to go to university and learn.”

Vázquez says their intention was to create a school for artists who nurture artists. “The idea is that artists teach artists, non-hierarchic, non-accumulative and modular system,” he adds.

Santos developed the concept of territory in terms of social space, which led Vázquez and his colleagues to focus on the relationship between the theatre, school and society, and the space in which it is situated. “The space is not just the geographical space, but the society in which it lives. So, our connections, our themes and the work are developed based on territory and space,” he explains.

Vázquez believes in the pedagogy of autonomy and creating an autonomous artist. Brazilian pedagogue Freire believed that the educators and educands (students) must live experiences together and learn from each other in the process. “It’s not only one who has the knowledge, who transmits the knowledge, but it is doing it together – that experience makes possible the learning process,” he says. The school trains artists who, through their own work, can discern their manifestation in the world as a social and aesthetic agent.

From Capra, the school borrowed the idea of the systemic cognitive process, wherein in a dynamic community system, there are relations of interdependence among its components. “This is very important for us to make it clear that the school is united because we have eight different departments. If we don’t have a connection among all the departments, it can be very, very difficult to connect them and to make them speak the same language. It would be like eight different churches,” says Vázquez.

Having colours, not years

For SP Escola de Teatro, practice is the basis for education. One has to learn how to do in order to be an artist. The school is not the building. It is every single person who lives through it. Vázquez and his colleagues reject the idea of a traditional school building and think of the theatre school as a social space where artistry is developed. In that sense, SPET is a cultural, artistic and social being, organised in a given urban context.

They replaced traditional learning models with modules such as Blue/Green/Red/Yellow which deal with different themes and subjects, giving students more creative autonomy to decide what they want to learn, and at which point. All students have to go through all the four colours across a span of two years. There is no particular order of colours they need to follow. Each year they will need to study any two colours.

“Our goal is to let students have experiences, make them autonomous and to develop their own art,” adds Vázquez. “So, what also happens is that, for example, I go to the Green module, which is character and conflict. I may be starting my journey in the school there but there are many of my colleagues who would be finishing the school in Green. So, I will be learning, not only from the teacher, but also from the experience the others have had. We strongly believe that the learning process is not in one direction – it is multi-directional.”

Each module is a four-month long investigation and dialogue into a chosen theme, material and pedagogue artist. Each module is autonomous and self-organised. The non-hierarchical principle is also applied in the relationship between teachers and students. Both are considered to be artists with different functions in the learning process, but this does not imply a submission/hierarchical relationship.

In Process, the students are under the department they’ve chosen to specialise in – Acting, Direction etc., where they learn techniques specific to their field for 3 weeks.

“So, they live like an experience in a theatre group, and they try out what they learned,” says Vázquez. “They develop their own work. It is autonomous. There is no interference. No teacher goes in and says, ‘you should do this or that’. They work the way they want to.”

After a few weeks of working together, each cell or theatre group shows the rest of the school the piece of theatre they’ve created. It is easy to relate to since all students have the same references, they have been working with the same theme albeit in different departments. It gives them an opportunity to see what others created out of the same material. “They can easily relate to what is being done by each group,” Vázquez further explains. “We believe a lot that the learning process happens not only from the teacher to the student, but among the students. They also learn by seeing each other.”

Once this showcase is complete, the students go into Evaluation mode where each student in a cell evaluates other members of the group and the educator. The student’s regular teacher also evaluates them and vice-versa. This is also the space for the students to reflect upon what they were able to apply from what they learnt in Process, identify the problem areas and understand what else they need to learn. After this complex evaluation process, each student goes back into their department (Process) and follows the cycle two more times.

The pedagogical project emphasizes on the recognition of an artist’s role in society. The school exists because of the community it is built around and vice-versa.

“Over the last five or six years, it has become very clear to us that the process we had was decolonizing our mind,” explains Vázquez. “What we understand by decolonizing is not just forgetting the tradition of Eurocentric theatre, but to unlearn things that are not supposed to be there. Sometimes, we are hostages of principles that are no longer real; society is not like that anymore.”

Theatre can help bring about change in the social fabric of a society. The Roosevelt Square, where the theatres are located, remained dilapidated in the 2000s while the urban revolution took its foothold within the theatres and bars located in the Square. This forced the government to renovate the Square itself.

“This impact was very strong. And this is so crazy to imagine that theatre can be so powerful to change the reality of the urban landscape. Not just that – we engage with neighbors and people who live around the school, with the trans community, for example. We have a program only for trans persons where they can meet weekly to discuss the issues they face in Brazilian society. It is one of the most important programs for trans activism in São Paulo,” shares Vázquez.

Creating autonomous artists is at the core of what Vázquez wants to do through SPET. “Autonomy is so important because you want to prepare students for the future and for the mistakes they are going to make in the future as part of their artistic process. You don’t want them to see it as something to be afraid of,” he remarks, as the conversation comes to an end.