Unrehearsed Futures (Season 2) #23 Awake, Alive, Empowered: Towards a ‘Planetary’ Theatre of the Oppressed 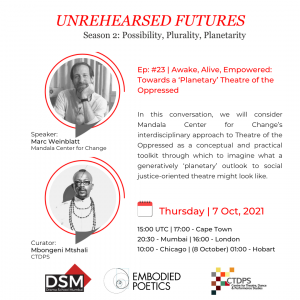 At the 23rd session of Unrehearsed Futures (Season 2), we had Marc Weinblatt, a Theatre of the Oppressed (T.O.) practitioner and co-founder of Mandala Center of Change in conversation with co-curator Mbongeni Mtshali. He spoke about his work in T.O. and how it can be put to use in this political zeitgeist moment, where the world is reckoning with histories of oppression and structural injustices.

Within T.O., one of the key methods is to create space for people who otherwise don’t necessarily have access or space to speak from a position of power and agency themselves. In a way, the focus of the work is put on the “oppressed” but what would it mean to put the locus of action back on those who have the power to make substantive and meaningful change?

The short answer to that question, Weinblatt stated, is humility. Throughout his life, Boal adapted his work to different contexts. “It was always for him, and in a very fundamentalist T.O. way, about the voice of the marginalized. But, it was interesting how so many leaders of the work were white guys. That obviously replicates some of the problems of society – who’s struggling and who’s holding the power,” he said.

Having worked in the US (and globally) for a long time, he has found race to be at the centre of everything. It is not the only struggle and it has always been there for the 30 years he’s been doing the work, but it is now more than ever, he said. “I’m at a point where I feel I shouldn’t be leading the work anymore,” he shared. “That’s not to say I don’t have something to offer. Experience is valuable. But I feel like I have to be even humbler than ever.”