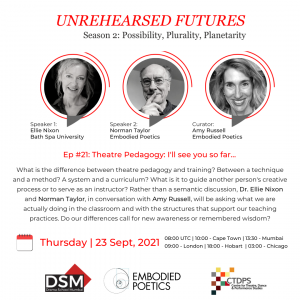 We’re back with an extended Season 2 for Unrehearsed Futures! At our 21st conversation, we had Lecoq pedagogue Norman Taylor and UK-based director, actor and teacher Dr. Ellie Nixon, deliberating on the differences between pedagogy, training, technique, system and curriculum.

Nixon believes that part of pedagogy is about really listening and watching and being watchful of the contexts within which one teaches, who one teaches and what one teaches. She sees pedagogy as a journey of mutual discovery between the student and the teacher. “I think pedagogy is about doubt. The questioning is absolutely about inquiry, rather than mastery. So, I’m really interested in people’s visions and views and experiences of inquiry-based pedagogy. I see pedagogy as a voyage of mutual discovery,” she said during the conversation.

Taylor, who is widely regarded as one of the finest international ambassadors of the pedagogy of Jacques Lecoq, said that doubt within pedagogy always led to questions. “Look for a question. You’ll find a question and then you can learn something,” he said. “It is about listening and watching, not hearing and seeing. When you’re on stage, you want people to watch you and listen; you don’t want them just to hear you and see you occasionally.”

The rest of the conversation had people in the room sharing their understanding of pedagogy and training and delving deeper into the etymology of the word “method” and the intrinsic relationship between teaching and being taught.