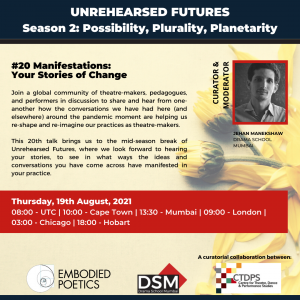 It has been one and a half years since the pandemic changed our lives in unimaginable ways. It has changed the way we think about theatre and performance and the digital space. Unrehearsed Futures began with a view to understand how to disseminate theatre pedagogy through the online medium and has now grown into investigating the various aspects of theatre and the possibilities, pluralities and the planetarity that lie within it.

At the 20th session of Unrehearsed Futures (Season 2), co-curator and head of Drama School Mumbai Jehan Manekshaw invited participants in the room to share how the conversations and ideas one encountered here (and elsewhere) around the pandemic moment have manifested in one’s practice.

Starting off the session, Manekshaw shared that his key manifestation through this series of conversations has been embracing and owning the idea of theatre as a process as opposed to theatre as a product. “I’m even trying to figure out how students can work and recognize this within their own practice. I want to foreground how they are improving as human and social beings in their classes and give them that central awareness and connect how theatre practices help them become that,” he said.

The other discovery he has made is the kind of transformational experiences one can have in the digital medium. “The idea is that space can be successfully held here, in this digital space. I’m trying to hold space right now with you guys,” he says. “That’s been a big one. And so suddenly, everything we’re doing in our work is recognizing and embracing that and then looking at how we can robustly and strongly hold quality space for learning, even though it’s digital.”

Art as a whisper-y campaign

For American playwright Kamili Feelings, the past year has made him think about how art therapy, teaching theatre, doing theatre, sharing a conversation with somebody in the street that is inspiring has become more amorphous. Having been part of Unrehearsed Futures conversations has helped be more “artsy” in his teaching and move away from a “do this-do that” approach.

“Art is much more of a whisper-y kind of campaign. It is belief, ultimately,” he says. “You keep whispering. And you say this is what you do. Your kids start repeating things you say, because it’s been inundated in the household, so they start saying the same things and doing the same thing. I think art is like that, too. It’s a process.”

While he is becoming more comfortable in settling into art as a process, he reckons he still doesn’t know how to deal with the theatre industry that is still about making the headlines, showing something, and making yourself useful.

Ruminating about how the lockdown increased the anxiety around “not being productive enough”, co-curator and lecturer at Centre for Theatre, Dance and Performance Studies Mbongeni Mtshali talks about Mark Fleishman and Mandla Mbothwe in their conversation about ways of engaging with the ruins of the past. “It really is about being okay with the practice of sitting in them and recognizing that they’re there instead of trying to slip past them, to imagine something new,” he shares. “In fact, the most rich, productive stuff helps us engage with our present, develops our capacity to work with those remains, the rubble, the detritus of these multiple paths we come from.”

At the beginning of the pandemic, co-curator and pedagogic director at Embodied Poetics, Amy Russell, was a strong advocate of bodies in the same space. But over the course of last year, her views have changed. Attending and being part of Unrehearsed Futures has become like a form of theatre, she says. “It seems to me that there is something about people talking across otherwise inhibiting distances. There’s something about that connection, which to me, feels very theatrical.”

Theatre-makers have been living in perpetual anxiety over the “mass extinction” of theatre for the longest time. But the pandemic has heightened these anxieties even more. “Under the pandemic, it seemed to even flower even more,” she comments. “Everybody was able to ask each other across huge distances if theatre was dying over there and how is one keeping it alive. It’s a wonderfully melodramatic thing.”

The pandemic forced theatre practitioners to embrace the void, the unknown. Jenny Lovell, a theatre lecturer at the Melbourne Polytechnic says we need to sit in the void like one does at any traumatic moment and see what comes. Having attended several Unrehearsed Futures sessions, Lovell has found herself going back to the classroom and discussing with students the ideas she came across in the conversations. “So, I’m trying to open up the world to them, because we can get very isolated and isolationist, as well,” she shares.

What she has also begun focusing on more and more is encouraging students to think about what all they do with the skills they learn as theatre-makers. “They get very sick of the Zoom classroom. So, I say to them go on, as an actor, now, you need to audition on this medium, you need to find it, make it your friend. It’s not a horrible thing you’re being forced to do because of a pandemic. How can you use this? How can you create and monetize it for yourself as a young performer?”

Collective reflection has taken on a whole new meaning during this time for South African theatre-maker and academic Lesego Chauke. “A big thing about this kind of medium that has come into my practice and into my teaching, is the importance of collective reflection. Sitting together and reflecting thoughtfully and deliberately,” she says and adds that while students were made to write in their journal and send course evaluations, but the pandemic has given them an alternative way of reflecting that’s more meaningful in many ways.

Adding to this, Feelings argues that it imperative to teach children to invest in process, not product. “We have to push people to say, no, it’s not about you getting something out and you being a great performer and somebody liking you. It’s something else going on. And we need you to record that.”

Look to the future

Regarding using technology to do theatre, Rodolfo Vázquez, founder of SP Escola de Teatro in São Paulo in Brazil, feels that at the moment it is technology that is giving people an opportunity to be together, in different ways. “We should look for the future, not for the past. For example, Google is already researching holographic presence, and I’m sure in 10 or 20 years, we are going to have holographic theatre,” predicts Vázquez.

“And who is going to teach that and learn how to do to deal with that, if not us? Many people are refusing this medium. They are struggling against the future of mankind, which is unrehearsed.”

Sophia Stepf, artistic director of the Berlin-based performance company Flinn Works opines that working online is a fruitful experience for students in terms of building an audience. “It is a space, potentially, for students to figure out how to work digitally, find a really small niche that they are interested in and then see how they can build a worldwide audience,” she says.

As the conversation draws to an end, Vázquez asserts that theatre must occupy the digital space, where capitalism thrives. “We should go there and manifest our or resistance, and also other points of view and find ways of expressing art through a very, very controlling system,” he says. As makers go into this space, one will have to come up with a set of morality and ethics to follow in the digital  medium and have more conversations about the value-added processes of theatre.