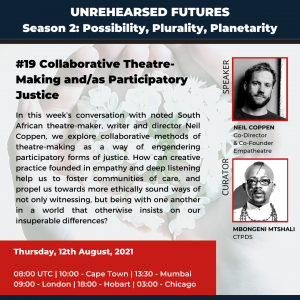 At our recent conversation for Unrehearsed Futures (Season 2), we were joined by Neil Coppen, a South African theatre-maker and co-founder and co-director of Empatheatre in Durban, and explored collaborative methods of theatre-making to identify matters of concern and a pressing central question.

Since 2014, Coppen shared that the Empatheatre team has tackled social concerns ranging from land based mining and displacement, street level drug addiction, the vulnerability of migrant women and the impacts of xenophobia, gentrification and public housing conflicts, and more recently, ocean heritage and governance. They believe creative and empathetic methods can facilitate deep listening and sharing knowledge across diverse communities.

Coppen, since the beginning of his journey, has always invested in research-based performances. With his partners in crime and co-directors of Empatheatre, Mpume Mthombeni and Dr. Dylan McGary, Coppen has worked with different communities such as the Fuleni and Somkhele communities, people affected by the use of Whoonga, a drug found cheaply in KwaZulu-Natal among others.

Sharing the process of collecting research for Ulwembu, the play on Whoonga, Coppen said that actors became ethnographers and went out into the communities to talk to people affected and collect their research. They spoke to Whoonga users, social workers, police personnel etc. “We were able to say, well, let’s get together and do a year and a half research process of trying to understand this problem. Not just from the perspective of a neighbor or a user, but let’s go speak to the police, to social workers, speak to activists. Let’s spend a year just listening to the stories and attending to those stories first, before even trying to devise some sort of theatrical output or shaping an advocacy strategy through the theatre. And that project was incredibly, incredibly dense and rich,” Coppen shared during the conversation.

The South African theatre-maker also said that their aim was to bring about a transformation within the oppressor and the oppressed. “If we’re not using theatre to actually challenge and change oppressive behaviors then how is transformation or change ever going to be possible through storytelling?” he asked. In Empatheatre’s productions, performances are shown to strategically placed audiences with different levels of agency, power and privilege in relation to the matter of concern. They also facilitate post-play dialogues between different stakeholders, holding space with empathy and co-creating knowledge.

During the course of the enriching conversation, Coppen also shared how he gathers funding for their productions, principles they follow to guide them in their research processes and how they foster communities of care.

Unrehearsed Futures (Season 2) #18 We Have Been Here Before