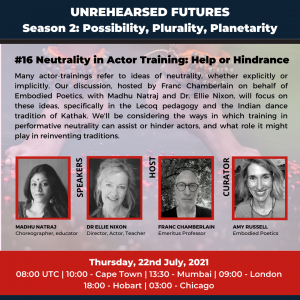 One of the pre-requisites to becoming an actor is being able to embody neutrality. Most drama training programmes around the world circle back to the idea of being neutral – neutral bodies, neutral faces, neutral voices. There is an emphasis on being present in the body, releasing tension within in.

A list of do’s and don’ts comes into an actor’s head when they head towards neutrality before launching into something else. Don’t shuffle your feet, don’t lock your knees, keep your feet hip-distance apart. But what is neutral? Is it unlearning and getting rid of what makes our bodies unique or is it inhabiting a neutral state of being? How do we know it when we see it? Why do we even want it? Is it a help or hindrance to actors in training?

Tackling some of these questions, Indian Kathak dancer-choreographer Madhu Natraj and UK-based director and teacher Dr Ellie Nixon engaged in a conversation with Franc Chamberlain (on behalf of Embodied Poetics) at a recent Unrehearsed Futures (Season 2) session.

Nixon’s interest in neutrality is currently rooted in the book she is currently writing Imagining Bodies and Performer Training. The book is about connecting the poetic dimension to Jacques Lecoq’s training to the French philosopher Gaston Bachelard and connecting relationally with the world, particularly with the preset Socratic elements of earth, air, fire and water. Having trained at the École internationale de théâtre Jacques Lecoq, Paris, she also trained with the neutral mask. Through her journey of discovery there, she found it to be a rethinking and reimagining of teaching and learnings.

For Natraj, the founder of STEM Dance Kampini and a self-confessed ‘Lecoq pariah’, she finds many resonances of neutrality within the Indian dance pedagogic techniques. Though, as a concept, neutrality is not taught as a separate phenomenon within Indian dance, dancers are led to that space through several processes, she shares.

“The first is something that is common to almost all classical dance and martial art forms, which is the concept of saadhana or the riyaaz. You iterate, constantly repeating, until your mind and body are saturated with the learnings, that you find a point of counterbalance and equipoise. And there you find your sense of neutrality.”

Natraj adds that the rhythm cycle in Kathak is called sama or sam, which is the Sanskrit term for neutral. Time is considered to be cyclical – be it for 10 beats, 16 beats etc. “That becomes your mandala to birth neutrality – in the sense that you travel, you collect all these experiences and then you find contiguity. In India, you don’t separate, you keep collecting until the point where you can distinguish,” she says.

The Kathak dancer-choreographer-educator also speaks about patrapravesh, a concept present within Indian dance theatre traditions, especially folk operatic forms. “The patra is the vessel, but in order to take on the shape of that vessel, of that character, we first have to empty our own crucible in order to receive that new experience, and to become that character,” Natraj explains.

Holding on to one’s cultural compass

Responding to Natraj’s provocations, Nixon reflects neutrality is often defined as feeling indifferent, nothing in particular or a lack of preference for one way or another. “I think neutrality doesn’t mean ridding yourself of all your personal traits of moving, talking or being. It doesn’t mean ridding you of your habits, or finding a correct posture. It temporarily shatters our habitual ways of seeing, doing and feeling. And it brings us back to that state that scholar Donna Haraway also terms as ‘not knowing’,” explains Nixon. Haraway describes it as a quasi-Buddhist value and an appreciation of not knowing and letting that be. It is a kind of letting go.

“It is that sense of starting from the same point, going on that journey, coming back to the same point, having that space where you can shift direction, change your ideas and be open to new ones,” she describes.

In Kathak, neutrality is an undercurrent. Natraj gives the example of ekpatrabhinaya, where one person takes on several roles. To show one dancer playing different characters, there are several devices used, one of which is palta. “You turn and you become a character. And it’s almost like working with the polarities. A mature dancer, I think, is the perfect conduit because you have collected those experiences and you can shift from that space of neutrality to becoming the character and back,” she says.

Natraj agrees that neutrality is not about forgetting who one is and leaving one’s cultural compass behind. “I think neutrality in that sense has to do with holding on to your distinction in some manner before you transfer me to another character. So, I will perform my ekpatrabhinaya differently from Ellie, for example. But we will still create the same rasa (emotion) in the audience.”

Picking up from what Natraj says, Nixon adds that there is no such thing as an absolute and universal neutrality. It is merely a temptation. “But that sensation of calm prior to action, a state of receptiveness to everything around us with no inner conflict is absolutely, I think, a felt space. I don’t think it’s a rigid. It’s not a ‘nothing’ space. It is something that we can discover and feel and sense ‘I am in a neutral space’ as a reference point. And then when you do have to shift from character to character to character, you’ve been through that rigour of that training, and it becomes second nature to you,” shares Nixon.

Nixon also looks at neutrality as a stepping stone to something else, a pre-performance of sorts. She recalls when she watched Lecoq put on the neutral mask in the 1980s in the Queen Elizabeth Hall in London. She says, “It’s about carrying a vibration, an amplification or reaching out. The walls of the Queen Elizabeth Hall seemed to disappear; his presence went beyond that.” It is about tuning into that disposition, into what that mask offers.

Natraj emphasizes on a balance between iteration and somatic intelligence to achieve neutrality. There are pieces she has performed for over 30 years. The steps are so ingrained in her muscle memory that she can dance without having to think about it. “This means of coming in and out allows me to also forget.”

In neutrality, there is an openness, feels Nixon. “It’s an active space, a space of readiness, of being in the moment, a way of corporeal or bodily listening. It’s a sense of vibration with the outer world rather than a solid form.”