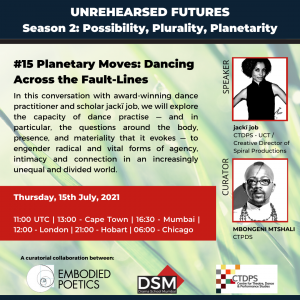 A year later, our world is still in the midst of a global pandemic while being compelled to engage with social justice movements across the globe. Since lockdowns were announced around the world in March 2020, theatre practitioners were forced to stay inside and figure out how to create art from domestic spaces. What felt harder and stranger was to create theatre or make it relevant while people were dying in large numbers every day.

We often perceive performing arts in contexts outside of reality – yet each performance is often a reflection of society and holds up a mirror to our times. In our recent Unrehearsed Futures (Season 2) conversation, this hard truth was brought to light by jackï job, a South Africa-based dancer-choreographer and senior lecturer at the Centre for Theatre, Dance and Performance Studies, University of Cape Town. She acknowledged the current violence unfolding in South Africa over the recent imprisonment of former president Jacob Zuma, and how artists position themselves in relation to such local and global crises. The global pandemic is another example where theatre-makers have been compelled to evolve during such crises.

During such times, how can dance, performance and art help us move across these imagined fault-lines?

“When we were in the middle of our second wave in January this year,” shares job, “I was putting on a live stream film that I’d made of me prancing around as a praying mantis.”

I remember thinking how do I justify this? How do I sit and go ‘Welcome to this show’ when we know that we’re experiencing such heartache right next to us right off-screen?”

At that point, job reminded herself of the deeper meaning of presence and that it was not only about her physical body being present at that moment, but multiple elements that came into play. She mentioned she draws from Italian philosopher Giorgio Agamben and French philosopher Jacques Derrida’s notions of absence in presence as a way to re-imagine the perceptive realities of the body.

In her reflection, job found, “Other than my being present, as in, you see me in the space now, this particular body in a particular time, there is also the presence of things that are invisible. It is about making the invisible, visible in other ways. And we can do it through our practice. I needed to remind myself of that. That how presence translates to the presence of what is absent, what is in one’s imagination, and in that sense might be absent in a material sense, but the performance of it makes it present.”

job also talks how we are always encountering these moments where we question our relevance in location to the crises unfolding. The insect, the praying mantis, is one of the bigger aspirations behind her latest work, which is about sharing the power of the invisible and the strength of being vulnerable.

“For me, the praying mantis is all about desire and compassion. And I’m thinking about those qualities when I’m working through the praying mantis. So, it is about the desire for change, this desire for transformation to be better, to be different, to reimagine. And at the same time, for that to happen, we need to allow things to happen. Only compassion can do that. It is about making space for everything, so that things can unfold in a particular way. That’s compassion,” job elaborates. She adds that if she reminds herself of these fundamental principles through her practice, then she feels truly engaged with how the world is in the present moment.

“It feels very real. And relevant.”

job has been dancing for decades and her work has taken her all around the world. Pursuing further the idea of dance, the body and presence, she says that the idea of presence in dance is often concerned with the form of the body, its lines and musculatures. “It is about how high we can jump, how perfectly we can balance, showing off the body, showing off the form of the body. It’s a lot about how you hold your head and the neck. All this is external. And so important for dance. But it is something that I have really pushed against,” reveals job.

job clarifies that it does not mean she resists working on the body, her musculature or exercise. She views the body as a conduit to meet and work through all philosophies. It is the way she navigates the world and thus requires ongoing care and maintenance.

With dance, the body’s presence is measured in terms of line and form, which job terms as a trap. “While that is important but when we as an audience observe connection in performance, it is seldom Because he lifted her so high, or she jumped with such lightness, or could do the splits so wonderfully. It’s never that. It’s something else we perceive as an audience. There is this other kind of vibration that happens between bodies which is a lot more difficult to tap into. It puts you on edge,” describes job.

A dancer’s body is expected to be a certain age, have a certain elasticity and skin texture, says job, which traps the body. It is these constrictions that she is committed to pushing against and discover a new kind of “presence-ing”.

“When one has that kind of sensibility then you’re not playing forward, you’re not only playing for the audience that’s there in front of you or around you. All of a sudden, everything becomes a lot more generous. And then you begin to touch,” she says.

When we think of touch, it is spoken and understood in terms of the physical sensation of touching another body. job counters this and asks, why does touch need to be with one’s hand?

During her career, job spent many years in Japan where she learnt Butoh, a contemporary dance form, and incorporated its principles in her practice.

“One of the principles of Butoh,” she describes, “is to imagine eyes all over the body. So, you know, there’s not just these two eyes that can see. But I’ve also developed this other sensibility of the body where, if one were to imagine, for example, that the face was inverted onto the abdomen. So, my breasts would be my eyes, my navel would be my nose, my mouth would be the pelvic area and vice versa. There’s a whole other way I’d be looking at someone, touching someone. There’s this whole other way that I’d be leaning on them etc. And I find that really exciting.”

With COVID, conversations around touch became more heightened. Theatre practitioners spent hours trying to find ways to touch people across the screen. How do we make contact when the ability to do so is taken away?

In conversations within her dance circles, job found there were never discussions about how one could use the back of their head to touch someone across the room or perceive contact as a way of moving away from something.

One of the conversations happening within pedagogical spaces in theatre is about how to capture elements of what makes theatre “theatre” and transfer it to a digital medium. How do we get physical bodies to embody across distance and yet make it seem like they are present in the same space and intimate? To this, job highlights the importance of iteration within performance: imagining it till you believe it and manifest it. She shares anecdote of her friend, who became a paraplegic after an accident, and continues to have a radical intimate life even 20 years since. “How do you remain intimate? It is through memory, she said,” recalls job.

“When the doctor came and performed the needle test on her, she could not feel neurologically. However, she convinced herself to feel within her intimate relationships. She could convince herself through consciously remembering experiences she had in the past. By really, really reiterating that imagination all the time, pulling that into herself, she could then begin to feel, even at places where the doctor said she couldn’t feel. She is able to feel because of her imagination, because of drawing at her consciousness in such a deliberate way.”

There is great value in drawing from memory and consciousness, feels job, even in this digital moment. Perhaps it is about us remembering what it is about performance that needs to be conveyed differently. “It doesn’t say this is the only way now. It is calling on different things, gathering them together. And in that gathering, something else is created. That for me is what radical intimacy is about,” job believes.

In terms of dance, job says it is crucial to look at how people with disabilities perform intimacy: how do they touch? They touch differently, perhaps with difficulty. It is a whole other of moving. “And there’s something exciting for us as performers. I think that we can learn from these other bodies, as opposed to just holding the grand form and the upright body so boldly in front of us, as if it’s God. I think there many gods,” she asserts.

As the conversation comes to a close, job reiterates that need to reimagine ways of seeing the body and touch and return again and again against the fault lines in order to try and experience different ways of how to dance across it.