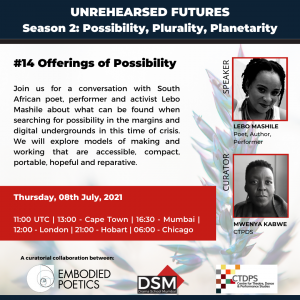 In a post-Apartheid country like South Africa, where racialized inequality is deeply entrenched in society, the onset of the coronavirus and the ensuing pandemic adversely affected the gains of economic transformation aimed at rectifying that inequality, shared Lebo Mashile, especially within the creative sector. Sharing her thoughts on the pandemic and the possibilities it offers, Mashile, a South African poet, author, and performer, joined co-curator Mwenya Kabwe at a recent Unrehearsed Futures (Season 2) conversation.

Mashile has been working in the South African film, television, and theatre industry for the last 20 years. She has experience as a voiceover artist, TV presenter, and producer. When the lockdown was announced last year, she was able to manage her earnings as she has a home studio set-up for voiceover and vocals. As event management companies, corporations, academic institutions, and government agencies realised that working on Zoom was essentially creating for film or television, they began investing a lot more money which took away a whole layer of businesses that were centred around creating events, says Mashile.

“So, we’ve had 20 years of black economic empowerment and, essentially affirmative action as a form of economic redress to try to transform our economy and bring more black professionals to rectify the situation that was created in this country by colonialism and apartheid. In the last 20 years, we have seen the emergence of black event companies, black creative companies, of black production houses. But we went into a hardcore lockdown, it immediately created an economic crisis, especially in the creative sector,” the South African performer explains.

Mashile hypothesizes there is a kind of economic apartheid entrenched in societies like South Africa “where you’re dealing with the same kind of post-colonial condition that we’re dealing with here.”

Mashile shares how many of her peers who have been working as long as she has, are now struggling to survive, and back to living gig-to-gig.

Despite the challenges, she believes the shift towards online performances is a bonus and boon to archiving. “We now have reams and reams of online data and archive for creative events and festivals that have gone online. I think that is a huge benefit and a huge plus for the future. And particularly on the continent. I mean, we struggle with archiving, because I think for a lot of creatives on the continent, the choice is about survival: do I make the work, or do I invest in archiving?”

Artists who invest in archiving generally have a deliberate agenda to do so and have a lot of money to be able to do so. Mashile explains this and asks, “But if your choice is between bread and butter, do you record this for posterity? Most people don’t do. So, it’s a historic problem throughout the African diaspora.”

That’s where the pandemic has offered a better possibility in terms of rebuilding a creative memory and canon that has been decimated by the histories that one has experienced.

“There is the sense of us being able to find the people who are genuinely interested in what we do, truly building tribes and communities around our own unique offerings. And I see certain communities doing that quite successfully,” she comments.

Mashile gives the example of how the #FeesMustFall and Rhodes Must Fall protest movements in South Africa led to the massive question of decolonization in the country. “One of the beautiful byproducts of asking that question on a national scale has been the resurgence of an appreciation of, a celebration of indigenous knowledge systems, particularly African spirituality which is centred around our ancestors and understanding and working with our ancestors as a healing modality.”

In South Africa, the Witchcraft Suppression Act of 1957 prohibits several activities related to witchcraft, witch-hunting, or witch-smelling. “It essentially made the practice of ancestral worship in South Africa, our indigenous spirituality, illegal,” says Mashile. “It was driven underground. It’s a big part of people’s lives. So, we lived in this dual consciousness for a long time. These were things that you did at home – engaging with your spirituality, ancestral worship, and your traditional practices. It was something that you did in the privacy of your own home, of your community. It was kept in secret.”

The shift to online practice during this pandemic has changed this. Mashile finds there is a resurgence of indigenous spirituality. These are young people, she says, who come from a certain segment of society that traditionally would not be open about these kinds of practices. “And it has created a really interesting movement online. These are young people who’ve been initiated as healers in their traditional healing practice. They’ve taken this practice and put it online. And they’re using the digital space to re-educate people, create community, consult. It’s obviously not without its flaws,” she elucidates.

The poet, author, and performer also feels that artists are at the cusp of cracking the wall in terms of figuring out how to take the skill sets that artists have, and make them live with integrity in the new online medium. She also emphasizes that artists and creatives, particularly from the Global South – from Africa, India, Latin America – have to be at the forefront of that.

Mashile believes this will help dismantle some of the divides that have existed historically and been exacerbated by the pandemic. “And if we don’t do that, I think we are in danger of living in a world where we in the Global South are going to be sitting and waiting for other people to book us for jobs. I don’t want to be on the receiving end of somebody else’s imagination,” she asserts.

“And I think if we don’t find a way of accelerating the opportunities for African people to be able to participate meaningfully in this new digital era, then we will continue to be a creative ghetto that gets mined, where people come to harvest our creative output, but where we are always on the receiving end of somebody else’s plan, where we’re not initiating our own plan. This is what terrifies me the most.”

But what Mashile finds most exciting is the emerging possibilities this new medium offers and provides an opportunity to discover one’s community. “What is it that we value that we know other people will appreciate? What can we offer that we could not offer at any other time because the platforms and the space did not exist to allow us to make this particular offering? What is it that we can offer, and which audience needs it? We can then start to think about ways of creating new art forms, new artistic offerings, new communities,” she shares.

“There’s a kernel, a seed of possibility that exists in this moment that is unprecedented, that I find completely compelling, fascinating, and invigorating when I’m able to get away from the darkness of everything else that is happening right now.”

She also believes that the pandemic moment has provided African creatives the opportunity to not just create their own work but also be the institution that supports each other’s work. “We operate in countries where there’s been an institutional collapse,” she says, “And I was very aware of this in South Africa, but I didn’t realize that this is a problem that exists throughout the world for African creatives.”

What Mashile finds interesting here is the idea to use other African creatives as a collective to enable each other and become each other’s institutions. “So, if we’re struggling with capacity, marketing, financing – those are things that we can draw on from the collective.”

Art as a tool of resistance

Mashile shares that what has become helpful for her is to embrace the idea that her life, in all its creative facets, is an act of resistance. In the broader society, the value of arts as a lifeline, an imaginative, healing, organizing, intellectual, spiritual, and psychological processing tool that every human needs, has not been inculcated.

The rub lies in the fact that inculcating an appreciation of the arts from an early age in the South African society means one is going to breed resistance. “Because that’s what the arts do,” says Mashile.

Art creates critical thinkers, people who can imagine. It creates people who can solve the problem. If one exposes an engineer or a lawyer to the arts, they become better at being an engineer and a lawyer because the exposure offers a huge scale of thinking that they couldn’t have imagined before, she continues.

Using her existence as an act of resistance, Mashile says that it helps her gain perspective concerning the obstacles and blockages she faces. It also helps her understand why we need to make arts and culture central to the new world we are imagining.