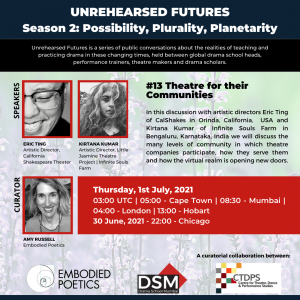 Among the many things the past year has made us reflect upon, owing to COVID-19 induced social isolation, one of them is questioning and answering for ourselves: Who is our community? Who are the people we want and need around us? If we take this a step further, what are the many levels of community in which theatre companies participate?

In the recent conversation Unrehearsed Futures (Season 2), global theatre-makers Eric Ting and Kirtana Kumar delved deep into how the pandemic has changed their communities in terms of who they engage with and who they engage for.

The last one year has been transformative for everyone around the world. For Bengaluru-based theatre maker Kirtana Kumar, the pandemic resulted in an enormous change in her life.

“I moved completely out of an urban circumstance to living on my farm, to farming and trying to find new engagements with theatre through the land,” she elaborates. One of the prime reasons for her move to her farm, Infinite Souls, was the migrant crisis that ensued in India where labourers found themselves walking back to their hometowns across the country when the first lockdown was announced abruptly.

“It was also a practical reason to move back because the people, the farmers who worked on our land, also wanted to return to their home. So, there has been an enormous change in the way I think about community, art making and theatre-making,” she reflects.

Similarly, for Ting, the artistic director of California Shakespeare Theatre (Cal Shakes) in Orinda, California, the past year has changed the lens through which he views the world. For the last 10 years, Cal Shakes has been committed to pursuing an anti-racist journey as an organization. Since he took over as the artistic director in 2016, Cal Shakes has invested their resources and energy into seeing the world through the art that they made.

“And I think what’s happened over the last year, in a very profound way, has been a shift towards seeing the art through the world and how we think about our relationship to it. Not as art at the centre of things but, as our community at the centre of things and art as simply one of several tools that we have available to us,” Ting elucidates.

Embracing a new ethics of otherness

Kumar recounts that the pandemic released a lot of stuff residing beneath the surface. Outside all the tragedy, it has been for her a precious time to rethink and find new ways of engagement. She did not make a concerted effort to change her community but waited to see if change would come organically. Her work at the Little Jasmine Theatre Project has always been at the intersection of caste, gender and sexuality to begin with.

However, when Kumar went to Germany during the lockdown, she began a series of communication with a lady working on the Infinite Souls Farm, Nagamma. “Nagamma comes from the Kuruba community, a shepherd community. Nagamma is about 10 years younger than me. She uses a smartphone. So, she has access to the visual medium, and we started a series of communications over WhatsApp and Instagram on our smartphones,” narrates Kumar.

The Bengaluru-based theatre-maker is now developing the communication she shared with Nagamma into a multi-platform performance called Nagamma’s Letters, which also includes a documentary performance with the two women. “Just Nagamma and me trying to figure out things,” shares Kumar, “Two women who communicate outside politically correct boundaries, trying to find open spaces within an intersectional framework, where there lies tenderness.”

What has helped Kumar in re-shaping her work during this time is rejecting a cannibalistic ethics of otherness that globalism has brought about. “But if now, we can assume and understand that in sharing, we’re always transferring, we can begin the journey of empathy and compassion with a new ethics of otherness. I find this really profound,” Kumar describes.

At Cal Shakes, Ting and his colleagues seek to redefine classical theatre, including Shakespearean texts, through the lens of equity, diversity and inclusion. The aim is to expand and reframe the concept and ownership of “classical theatre”. “In this country, Shakespeare was often used as a tool for erasing language and culture from indigenous peoples. That was one of the things that was taught in these boarding schools across this country,” he says.

Ting states that if you do work around Shakespeare, you’re often centering Shakespeare. In relation to vulnerable communities, the conversation then needs to veer towards what is being de-centered and how should one de-center in such a way that you’re not actually disappearing?

“At Cal Shakes, we frequently use the image of a circle held by human beings,” Ting describes, “Think of the regular acting exercise where you tell everybody to circle up. There’s always that moment when everybody looks around awkwardly at how poorly the circle is made. There is this idea that the shape of the circle is being held by a collective of human beings.” In the centre, there’s nothing there. But the sense of a centre is energetically held by each person, and each one is trying to shape that circle, actively. Ting describes it as a process, where there’s no line that one is meeting. No one has drawn that circle out for one to stand up. Each one is trying to find that space.

“And that process, that that kind of energy, that space is the space that we’re interested in being. The only way to be in that space is to find a way to release yourself into the whole. Because inevitably, what makes circles so hard to make is because people have a point of view about what the circle is and where they shouldn’t be standing,” Ting says in relation to how does one go about de-centering a cultural monument like Shakespeare within indigenous communities.

He also addresses his concerns about the relationship between language and legacy. There comes a point, he says, where language becomes stale because it becomes about labelling things, and turning them into catchphrases such as ‘Equity, Diversity and Inclusion’. The more people sign onto it, the more superficial their relationship to it and the more diluted it becomes. “So, language becomes a method for, for shifting power, shifting the centre of power. That’s often why we see the shift in language come from what is I think, historically, peripheral communities,” Ting says and adds that Shakespeare made up language in a way that forced people to listen.

The gifts of the pandemic

The pandemic has made everybody rethink their ideas about something or the other. The idea of solid identity, a solid “you” has been shaken. “They’re no absolute universally proven idea on how to go forward in this. It is a gift of the pandemic that the idea that the Global South should constantly consume messaging that arrives to us from the Global North or the West, has been demolished. They don’t hold good anymore, the old rubrics about modernity or development” states Kumar.

For Cal Shakes, during the pandemic, Ting and his colleagues had a spate of virtual programming but soon found that in terms of outreach they weren’t able to achieve the kind of global connection that other artists have been able to through online platforms. “And that’s, I think, because so many of our theaters are tied to their specific local communities. And secondly, there is just a glut of entertainment options out there today,” Ting opines.

As a Chinese American practitioner, he also talks about white adjacency and makes it a point to describe Cal Shakes as a legacy white institution. “I’ve often found myself in spaces where I feel the need to name that because a lot of my work is about advocating for other communities that have historically had less privilege than I’ve experienced in my life,” says Ting, “This idea of naming white adjacency in a way that isn’t about apologizing yourself to invisibility, is a challenge.”

He also emphasises that it is important to show up for these communities in a humble, present way. The impulse is often to give way to the communities whose struggle is now taking centre stage. In that process, stepping aside often turns into stepping away completely, explains Ting, which leads a disappearance of the whole sense of community. “And to me that’s tied to a fundamental transactional relationship that we have in this country. If we can find our way back to deep relationship, a space where we’re not connecting with people because of the project that we’re doing, but we are in connection with people despite the projects that we are doing.”

Kumar believes the pandemic is an opportune moment to rethink modern pedagogies for theatre and take stock of what is offered to students. “In India, we’re living in a time of fear of a huge right-wing uprising. It behooves us to consider our past and tradition and to also act in an alive manner. For me, theatre is also about being alive. Aesthetics is very high concern but it’s also being alive to the moment and to being critical of the moment and seeing what’s going on. As a creative practitioner, I need to be alive to my immediate circumstance, and to the communities around me,” the Bengaluru-based practitioner asserts.

Taking that thread forward, Ting believes that theatres are not meant to be museums or a space for escape from life. “What we mean by that is our practice is not the preservation of past practices – it’s something more immediate. We go to the theatre to let the world in,” he says.

As the conversation winds down to a close, both Ting and Kumar believe that moving forward, it important to de-center the pedagogue as the authority of learning and the rigidity that comes along with it. They agree that the role of a pedagogue is to shine the light on something and give learners the tools with which they can possibly explore it.