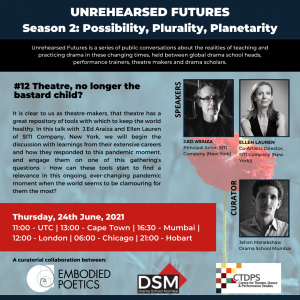 We’re a little more than a year into the pandemic. By now, Zoom has become a regular part of our lexicon, online training doesn’t seem so absurd anymore and online meetings are a comfortable substitute for in-person meetings. In the twelfth session of Unrehearsed Futures (Season 2), members of SITI Company, New York, Ellen Lauren (co-artistic director) and J.Ed Araiza (principal actor) shared what the past year has been like for them, the opportunities and possibilities it opened up in theatre and pedagogy and what they reckon they need to do as they move forward.

Lauren shares they’ve had to let go of their studio, the home of the SITI Company, due to the pandemic. “We began to shed all of the trappings that come with being a theatre company for 30 years,” she says, “We began to give things away from our storage to people who might be able to use furniture. These were goods from 30 years of a repertoire stored away.”

Lauren admits she and Araiza are privileged enough to have a place three hours outside New York City. “I recognize that and all of the parts of my world that have allowed me to have this place. We refurbished this old, dilapidated barn and this became for me, where I met the world.

Living in the vertical and horizontal

Lauren has spent over 40 years working with Suzuki Tadashi, the artistic director and founder of the Suzuki Company of Toga, which is nestled in the mountains of the western coast of Japan in a small village in the Toyama prefecture. The work Lauren has been doing with SITI Company during the pandemic was all online. She describes her life as that of a transmitter. “I’ve had a world where I live in the horizontal and I live in the vertical. And for the duration of my life as a transmitter, this is what I’ve tried to communicate to a young artist for making purposes, which is to recognize things for what they are in the horizontal and see it as potential and material with which to make one’s work,” she says. She views the horizontal axis as recognizing things for what they are, and then discovering what the vertical possibilities are in the online space.

Lauren states that the Suzuki training is to recognize the individuality in each person as they face the criteria of finding their vertical space and bring forward, for expressive purpose, what is already there within a young and old artist. It is often maligned and misunderstood, she says.

In terms of her teaching, Lauren admits she hasn’t been as happy as she is now since the pandemic started. The privilege of physical presence was stripped away when she transitioned to online teaching. “I couldn’t believe how the knots in this rope of my life, were able to be handed through the screen, handed through the generosity of the artists gathered from all over the world. And they were able to grab these knots,” she says and adds that she didn’t do the “pulling” for them; they were pulling themselves along.

Lauren adds that this is a great period of experimentation. “The silence on the other side is palpable, until you learn to press against it and welcome it,” she believes. “You can feel the thinking, you can feel the breathing, and carry on. We’re now into the phase where we’re making a great deal of work. And the tools are all there. The frame is another piece of material. The frame is another way of seeing and exploding, the way we can work together.”

As the head of graduate acting program at the University of California, Los Angeles, Araiza, found that while Zoom made learning accessible, it also made visible the deeper divides between different sections of society in his classes. He uses his training in the Suzuki method and Mary Overlie’s Viewpoints as a way to empower younger artists to tell their own stories. “My job is not to tell artists the stories they should tell, but to try to give them the tools to tell their stories. And that is my primary interest nowadays,” he says during the conversation.

The pandemic has brought about many changes within the SITI and Araiza believes they started to happen before the events of the last few years in the US. That has empowered those in the US to necessarily look at them with a long overdue, open-eyed gaze at the structure of power and hierarchy, not only in the country, but specifically also in art making, theatre and filmmaking practices. “Our company was starting to examine that as well,” Araiza says. “Going into the future, knowing that our company might be changing, what do we do with these tools that we believe in?”

Over the last few years, Lauren and Araiza have been actively trying to find a way to share their vocabulary and training with a larger pluralistic community, beyond Eurocentric communities. Araiza shares that they’ve begun more outreach to every continent in the world except Africa (yet). “Why is that important to me? Because I think these tools are a wonderful way to empower artists to tell their own stories. It’s not to tell people in any continent what stories they should tell, or even how they should tell them. It is to give them the tools to re-embrace a sense of virtuosity and to tell their own stories,” he comments.

What he also finds instrumental and vital is reflecting students’ reality back to them. Araiza describes himself as a “Latino Chicano” who grew up close to the fluid borders of South Texas. He is astonished by the few numbers of students who say they’ve had a professor of colour teach them in the past. “I think what’s instrumental to me is having as many educators as we can, put in front of them that reflect the reality of the student taking the class. I also think that remote accessibility is a large part of that,” he describes.

As the conversation comes to a close, Araiza reiterates that artists such as theatre-makers are great with obstacles. They know how to tackle them. As we navigate the hurdles of teaching in this medium, Lauren leaves us with a thought Anne Bogart, co-artistic director of SITI Company, shared with them, of how prisoners of war used to communicate through prison walls with the help of taps.

“The prisoners were separated from one another in their solitary cells. They worked out these taps to one another and survived through tapping on the wall next to them. They survived for many, many years with the limitations of communication of human survival. We, now, are essentially tapping. That’s all we’re doing right now. We’re just tapping,” says Lauren.