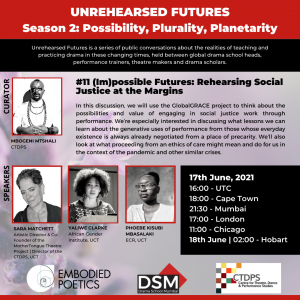 For our twelfth session of Unrehearsed Futures (Season 2), we had Sara Matchett, artistic director and co-founder of The Mothertongue Project (and director of CTDPS, University of Cape Town), Yaliwe Clarke, interim director at the African Gender Institute and Phoebe Kisubi Mbasalaki, an early career researcher at the University of Cape Town, exploring the relationship between performance and social justice work.

To engage deeply, the three speakers use the GlobalGRACE Project as a point of departure to engage with how performance can be used to engage with communities at the margins. According to its website, GlobalGRACE “employs arts based practices and multi-sensory research to investigate the production of cultures of equality and enable gender positive approaches to wellbeing internationally.” Matchett, Clarke and Mbasalaki currently form the South African team at GlobalGRACE, which also has academic and non-academic partners in the Philippines, UK, Brazil, Mexico and Bangladesh.

What GlobalGRACE does, describes Clarke, is look at equality as a cultural artifact. Each team investigates the various ways in which equalities are made but also contested in different parts of the world. “And the other thing it does, is it looks at the ways in which cultures might best be understood as practices through which people create the worlds in which they inhabit,” Clarke explains. “So, we investigate how people’s creative practices challenge inequality, and also engender new possibilities for more equitable ways of living together. And it’s tough work.”

The South African team, comprising Clarke, Matchett and Mbasalaki, works closely with a group of sex workers that are part of an NGO in South Africa called the Sex Workers Education and Advocacy Taskforce (SWEAT). They have been, for many years, pushing to decriminalize sex work in the country. Apart from the legal processes, SWEAT has also been creative in destigmatizing sex work. “They’ve created some very interesting forms of what they call creative activism,” says Clarke.

The research project that the three of them work on with SWEAT is called ‘Participatory Theatre and the Production of Cultures of Equality Amongst Sex Workers in South Africa’.

The GlobalGRACE project is funded by Goldsmith’s, University of London. Speaking of their project, Matchett says that being given three to four years to work on it has given them the time and space to deeply engage with SWEAT and the sex workers to form a sex workers’ theatre group.

“But having said that, the project has a lifespan, which is dependent on funding. And, in fact, the project is drawing towards a close,” Matchett says. “Initially, the idea was to get us to a point where we could launch an independent sex workers’ theatre company, a first in South Africa. And yes, that still is the plan and still is the dream.”

The ethical question for Matchett here is: What happens to the sex workers’ theatre group beyond the research project? How do we ensure the ongoing-ness of the project?

“But essentially, as academics, as practitioners, our role in the project comes to an end at the end of this year. And then in a way one goes on to the next research project, because that is what the university requires of us. That’s what the hierarchical structure requires of us,” she further explains.

Adding to Matchett’s point, Mbasalaki says there are barely any spaces without contradictions built into them. Having been gender studies scholar primarily, GlobalGRACE was the first time she interacted with theatre and performance. Going deeper into the question of sustainability of the project, she calls on South African dancer jackï job’s practice wherein she works in relation to culture and building cultural elements and engages the body.

“It interrupts inherited cultural elements, such as related to structural inequality. And with that, I point to the element of healing which is very much embedded with the kind of work we do. And this is something that will remain with the sex workers’ theatre group, as a material means they can draw on moving forward and does not necessarily play within the framework of finances, money, or economic aspects within which we root and locate sustainability,” Mbasalaki asserts.

She goes on to add that the tools they have shared with sex workers, in terms of living on the street and navigating trauma in their bodies, is a way of producing new cultural epistemologies that will live on in their body, a critical apparatus that they can deploy in other scenarios and in other spaces in their lives beyond just the moment of performing in the theatre. “Structural inequality has placed sex workers on the margins. So, these new epistemologies live on in the body. That’s my way of looking at this element of sustainability as opposed to the economic aspect in relation to that.”

“This is a different kind of sustainability that cannot be monetized. It remains invisible,” adds Matchett.

Engaging in theatre with a community involves using it as a means to meet oneself. The impact in this case cannot be measured in quantifiable numbers. The moment we stop thinking of success in terms of metrics, newer possibilities and moments emerge of understanding that impact. It is intangible and less easy to grip onto, but it is definitely present.

In terms of using theatre and its tools to embody a community, Clarke talks about how the sex workers use their body, breath, movements to tell their story and create the script. “They felt a shift in their body, a change,” describes Clarke, “They felt that they had addressed something that was sitting uncomfortably in their body and memory, in terms of how they process what happened to them, the kinds of things that happened in childhood.”

“And in the process of developing those powerful pieces, they get to see each other and process perhaps trauma and pain that is sitting uncomfortably in the body, together. That’s a shared memory.”

In terms of understanding what remains with the sex workers beyond the research project is the memory of sharing stories, creating together and using that to draw on. “And they have a community in which they can do that with, beyond the end of this funding. It just means they need to find a way to physically get together to do it or do it online at some point, although with quite tight facilitation,” Clarke adds further.

Using theatre and performance for social justice is about connection and in this case, possible reconnection and felt perception, feels Matchett. “So, the feelings in the body and coming to terms with them are the drivers of expression. Feelings are the thing from which the expression of our stories emerge.

In my work with the theatre group, I have deeply invested in breath. And how breath can connect us with our felt perception, how breath can connect us to the stories that live in the body and assist us in finding ways of expressing those stories through the body. So, the body is central. And for me, it’s about reconnecting with a body that I think a lot of the participants have disconnected from.”

Matchett also believes in pursuing practice-led research in theatre and performance. As the conversation comes to a close, she asserts that what theatre-makers do is vital within an institutional structure – It opens up possibilities for interdisciplinarity and trans-disciplinarity with the University structure, allowing researchers and practitioners from different backgrounds to engage with another and build a new vocabulary.