Unrehearsed Futures (Season 2) #10 Planetarity in the Pandemic: Have we lost the moment? 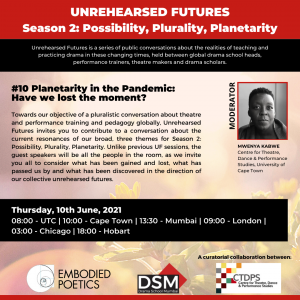 We’ve been living through a pandemic for more than a year now. Lockdowns, work-from-home, vaccinations – these are terms that have become commonplace and accepted as the new normal. When we began Unrehearsed Futures last year, we reached out to a global community of theatre pedagogues, students and practitioners to understand the terrifying moment we found ourselves in and share ways in which we could move forward and through it.

At that point, we all felt we were in the same boat, and it invited us with an opportunity to reflect on the moment, what could we, as theatre-makers, do to introspect and change the way we worked and viewed the world. We agreed we couldn’t and wouldn’t go back to what we considered as “normal”.

Over a year later, with the development of vaccines and many countries rolling them out, the emphasis is again on hurrying back to the “normal” way of working, of getting back into the theatres. This led us to question, have we lost the moment?

For the tenth session of Unrehearsed Futures (Season 2), we decided to have no guest speakers and instead invite people in the room to reflect on what ‘Possibility, Plurality and Planetarity’ meant to them, what the pandemic moment has been for them, and what does the present moment feel like for them.

For US-based playwright Kamili Feelings, he’s had to have some difficult conversations with friends where things became contentious. In that process, he lost of couple of friendships too. But what this helped him realise is that there is an intimacy when you criticize someone and still choose to stay in the room. “It’s an intimacy when you criticize their work, because you put some time and thought into it. And now you’re actually breaking through all that to say, ‘I don’t like this’. So, that always struck me as something very intimate, yet very destructive. There’s some central truth or radioactivity that we’re always shielding ourselves from,” he shared during the conversation.

While Feelings reckoned with such “radioactivity” in his life, South Africa-based theatre maker and co-founder of the Johannesburg School of Mask and Movement Theatre, Kyla Davis encountered spaciousness in her personal and professional life in 2020.

From being a person who simply hustled all the time, Davis says she has now understood and begun embracing the act of slowing down. “I mean, we were forced to slow down but I really embraced slowing down and seeing what benefits it brought forth, for both myself personally and as an artist and a creator. I can see how much that has transformed me really and allowed me space to look at things that I haven’t,” she shares and adds, “I’ve just turned 40. And I would say that probably for the last 20 years, I have not been looking at things. I’ve just been doing and going, going and going. And so yeah, I’m really appreciative for this reflective time and this spaciousness.”

What the past year also brought forward for Davis was accepting who she is as a practitioner. As her peers and colleagues began making their foray into the digital space in terms of performance, Davis chose to stay away from it and says she felt guilty for quite some time.

“It brought up questions about why I find it difficult to watch things online or participate in things online. I felt very guilty, ashamed and like an underachiever, at first. I felt like I wasn’t avant-garde enough for this time,” she shares.

“But there has also been reaffirming of my practices and understanding what live performance and teaching in person means to me. And then I relaxed into it and accepting to myself that it’s okay, I am who I am as a practitioner, and I am drawn to liveness.”

‘Finding something new in the moment’

When the pandemic began, there was a sense of kindness people extended toward each other, reflects Dr. Lazlo Pearlman, a creator, performer and teacher at Northumbria University, UK. Within the UK university system, there was a moment where anything one did was enough, he recalls.

“There was a kind of expansiveness. If you just came and if you came for five minutes, and you couldn’t handle it, you could shut Zoom and leave. And that was true for our students and all of our colleagues. It felt very expansive, and holistic and non-hierarchical. There was this sense of ‘we can find something new in this moment’.”

However, this lasted for a while, and then it shut down, believes Pearlman. For him, the moment highlighted a lot of good within the system and then threw up the deeper flaws within it. “I’m not the only one this happened to, but I am curious too. What is the moment and the potential of what is a missed possibility? What are the other possibilities?” he wonders.

UK-based lecturer at De Monfort University, Leceister, Funmi Adewole also feels similarly. “I believe we missed a moment. I wonder what it was in the moment that made us able to be that expansive,” she asks, adding on to Pearlman’s comments.

“We found ourselves on the same level. And therefore, there were no hierarchies to protect. And therefore, we could give, receive, make allowances for and we could support each other. If we’re able to capture the thing that enabled that kind of connectivity and empathy, then we haven’t lost a moment,” Adewole reflects further.

Kirtana Kumar, a Bangalore-based director and theatre-maker finds herself in a very different place than where she was in March 2020. “In 2020, I was completely willing to embrace the online space. I had no problem. This was the space that my students anyway had inhabited for more than 10 years now. I wasn’t averse to it,” she shares.

However, today, Kumar is more concerned with and curious about how theatre practitioners are going to make things different for young people. What are the ways in which the community is going to really tackle issues of mental health within the digital space?

But within this, what and who are the gatekeepers, Kumar asks further. She is also curious about what are the inequalities inherent within this digital space. “How do we build equality and equity into it?

I feel terribly invested in the local. So, when you say planetarity, it’s great. And on an abstract level, I get it and I’m with it. But I really am into reinforcing and supporting the local at a very, very primary level right now,” she shares.

Going back to the idea of intimacy and planetarity, Mbongeni Mtshali, lecturer at Centre for Theatre, Dance, Performance Studies at University of Cape Town, proposes an expression of a planetary city in the form of radical intimacy and empathy.

“It’s about recognizing our closeness to one another but without consuming the other entirely in order to erase specificity and difference,” he explains. Mtshali acknowledges that Zoom has opened up people’s networks and allowed them to interact with others all over the globe but wonders about the impression it creates that one is being intimate with the other across the digital space.

“I add the word ‘radical’ in front of it because it about recognizing that this actually isn’t a moment of intimacy in that way. We need to push to recognize positioning, perspective and not try and resolve difference. Instead, we need to recognize where those very differences come from. The real work can begin happening when we begin to acknowledge the different positions from which we come into the conversation,” Mtshali expresses.

Adding to the conversation, Adewole says the digital space can create mirages of intimacy. “So, what is it that we have experienced in life before COVID that we need to mine, that we need to bring across? And I think this situation is making us look deep at what that is, and really understanding it. Because without that, we can’t reimagine this space, or re-rework this space to make it a place where intimacy can happen,” she asserts as the conversation comes to a close.