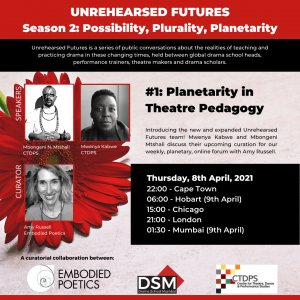 It’s been more than a year since the COVID-19 pandemic began. What was initially perceived as a ‘temporary disruption’ has now turned into the ‘new normal’ over the past year. Countries like India are in the midst of a vociferous second wave of infections.

Around this time last year, the thought of teaching drama online or performing pieces of theatre online were unthinkable. Zoom, the video conferencing platform, set new challenges for theatre pedagogues, students and practitioners in terms of how to teach in the absence of presence, the benefits and challenges of alternative technologies, mediums and formats for live performance, the shapes, forms and directions that theatre can take.

With lots of questions and a curiosity for answers, curators and hosts Jehan Manekshaw (Head, Drama School Mumbai) and Amy Russell (Founder and Pedagogic Director, Embodied Poetics) began Unrehearsed Futures as a series of public conversations about the realities of teaching and practicing drama in these changing times and exploring both our ability to respond, and our response-ability.

Kickstarting another edition of Unrehearsed Futures, Season 2 welcomes on board co-curators Mbongeni N. Mtshali and Mwenya B Kabwe (lecturers, Centre for Theatre, Dance & Performance Studies, University of Cape Town) who, along with Manekshaw and Russell, will continue to look at questions of performance, pedagogy, practice and critique, broadly framed by their chosen themes on ‘voicing’ and ‘transcendence’.

At the first session of Unrehearsed Futures (Season 2) held recently, Mtshali and Kabwe shared how they respond to questions of plurality and planetarity from their fields of interest. They also share how their own practices and understanding will shape the sessions they will curate for Unrehearsed Futures in the coming months.

Kabwe, a Zambian-born theatre maker and scholar, studied and worked across England and the US for many years before settling in South Africa. “As a result, my theatre-making practice really centres very much around migration, migrancy and movement and I have a particular interest in African women’s migration narratives,” she says, adding she has become really interested in African futurism, particularly, where migration, the relationship between migration and African futurism meets as dramaturgical strategy.

During the course of her research for a production in Eastern Cape, South Africa a few years ago, she came across ‘a rather colourful character’ in Zambian history called Edward Mukuka Nkoloso, a school teacher in the 1960s. A grade-school science teacher and the director of Zambia’s National Academy of Science, Space Research and Philosophy, he sought to beat the US and the Soviet Union at the height of Space Race and put a 17-year-old girl and two cats on the moon. To train his astronauts, he set up a makeshift facility outside Lusaka and used tire swings attached to trees and rolled the astronauts in empty oil barrels down bumpy hillsides to simulate weightlessness. When asked to identify his spaceship, Nkoloso, who also wore a cape, pointed to two oil drums stacked on top of each other. He even referred to the participants of the space programme as Afronauts.

“So needless to say, he continues to fascinate me to this day. And what happened as a result of doing this research, coming across him, was I made a piece of work called Astronautus Afrikanus. It was this mad immersive piece set in and out of all of the nooks and crevices of the Rhodes University main theatre complex,” Kabwe explains, elaborating on her practice.

Similar to how Kabwe’s work relates to her personal life and roots, Mtshali’s theatre-making practice is driven by his own experience of being black and queer in South Africa, growing up in a very “traditional” home in the mid-1980s between several states of emergency, when South Africa was debating the state of the nation as it were. Being the last of five children, and the first to go to a private school which were generally not available to Black students at that time, Mtshali didn’t know much English. He went through what he likes to call his ‘Pygmalion’ years, where he was acculturated into the appropriate language and comportment for a student at a private school.

“So, from a young age, I was hyper aware of being embraced within specific cultural communities, but also being aware of my difference to those,” he explains, “That informs a lot of my thinking: questions on identity, questions on blackness, and more broadly conceived as questions on nationalisms in the plural. My work takes off from the personal. I’m really interested in this question of black queer and black femme performance specifically. And the kinds of tactics that queers of color use to push back against, destabilize and perhaps re-imagine what it is to belong to the nation and to belong to a black community, where a lot of these questions are really fraught.” His last major work, in (s)kin, was inspired by the period he spent in the private school and what followed after.

Mtshali’s interests have also begun expanding into the Caribbean, Latin America, South Atlantic and the Indian Ocean. Increasingly troubled by the overdetermination of all stories about Africa and about black people in the transatlantic slave trade, he began asking how else Africans have entered into global presence, other than as objects or commodities. “And the work has taken me in various ways. For example, how dance practices transmitted ideas of African and African-ness within colonial spaces, without necessarily having to have arrived in those places via slavery,” says the multidisciplinary theatre practitioner.

“I’m really interested in syncretic modernities that emerged in Latin America, partly as a result of slavery, and also the other stories that emerged. I’m also interested in how Africa has moved elsewhere into the globe across the Indian Ocean – this is somewhat less explored in post-colonial black modernity,” Mtshali shares.

Speaking of the theme of voicing he has chosen for his curated talks for Unrehearsed Futures, Mtshali explains his fascination for language and how he views voice, both as a material and the conceptual idea of voices as plural. “Vocality might be a more accurate term and more specifically, poly-vocality,” he says, “I come from a multilingual community. So, this idea of language and the voice and what the voice sounds like, has always fascinated me in some ways.”

He believes voice can be quite deliberately attached to questions of identity. It isn’t only about the ‘sound’ of the voice, but its textures and how it locates one within a particular cultural space, economic categories among other things. Mtshali’s interest lies in observing what happens when multiple voices occupy, whether by choice or force, the same space.

“What happens when you speak with one another, or speak across one another? What other kinds of sonic possibilities become available when we play with all of us speaking at once and not necessarily with an interest in hearing one another? But just what it is to sit with multiple voices at once?

Voicing is a somewhat messy way of grasping at these ideas around identity, around intelligibility, around poly-vocality, our capacity to think and speak in multiple voices. But it is also about just the ethics of sitting with other people and laying claim to a voice, or the multiple voices in which we speak,” he elucidates.

Since the pandemic began, what’s come into sharp focus for Kabwe is how one’s particular skills, tools and languages of theatre-making can be applied and repurposed in different settings – outside of academia and making creative goods per se. Apart from teaching at the University of Cape Town, she has also done a lot of process design facilitation work with Ingenious Peoples Knowledge (IPK), a company based in Cape Town and Geneva.

Connecting it to her chosen theme of transcendence for curating the Unrehearsed Futures sessions this season, Kabwe says, “In my mind, the languages of process design facilitation and the languages of theatre-making really go hand-in-hand. I’ve really had to become much more articulate about what it is that I bring to the table as a person who is trained in theatre and performance, and what my skill set is outside of the context of making theatre. Some of the principles of the work I do with IPK are, to serve the human spirit, to leverage diversity and to handle complexity. These are things that resonate so much with some of my core principles as a theatre-maker.”

She is keen to speak with people who have some sort of theatre and performance training but don’t necessarily make “theatre” out of it or teach. Instead, they have transcended “theatre”, drawing on those skills directly, having figured out ways to be clear about what those specific skill sets, languages and tools are and use them in interesting ways.

One of the focal points of this season’s Unrehearsed Futures is to explore what it means to be planetary at this point in time.

Responding to this, Mtshali believes it is the tension between the impulse to step outside of globalist frameworks to something that is not anthropocentric. “And yet performance, ironically, is one of those things that relies, if anything, on the recognition or the capacity to recognize other humans. We’re stepping out into this scale that exceeds the global, that is its excess, maybe. But we’re moving simultaneously into this deeply intimate space that relies on the recognition of our fundamental human-ness. So, it’s both a de-centering of an anthropocentric worldview, yet at the same time, it has to emerge from a grounding perhaps more explicitly in the body than anything else in the moment,” he says.

While Kabwe finds it liberating to think about planetarity but it also reminds her of particular inequalities within society. One of the concerns of teaching online has been of access. “We’re back in a space of asking ourselves as we have for a long time, as we teach in this part of the world: how do we bridge the access gaps? This feels like a huge one. And if we are going to be teaching and learning and working in this way, for the foreseeable future, then there’s real work for us to do and to figure out how to make it work,” she comments.

As the conversation comes to a close, Kabwe and Mtshali contemplate on what it means to be a pedagogue in this space and time. If one is to look at voicing as a way to find identity and transcendence to find one’s interdisciplinarity, these seem to be investigations rather than a teacher delivering information to a silent student. Responding to this, both Kabwe and Mtshali feel that as a pedagogue, their role isn’t to offer expertise to deliver answers. Rather, it is to frame and model ways of engaging in a conversation. While there may be things that aren’t necessarily useful for one, it is the act of conversing and listening to and with each other, which is the starting point for recognizing that we all have the capacity to make knowledge in a particular way.