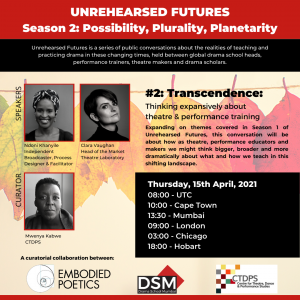 The ongoing COVID-19 pandemic has brought forth crucial questions for theatre pedagogues and practitioners: Is knowing how to do theatre enough? Is theatre to be taught as something you only do on stage? How do we take the skills of theatre-maker and apply it to something beyond this form?

For Ndoni Khanyile, a broadcast journalist, process designer, facilitator and theatre-maker based in South Africa, it was a series of happy accidents, “or disappointments”, which opened up new doors of opportunity and compelled her to find new ways of applying what she learned as a drama student at University of Cape Town (UCT), she shared at a recent Unrehearsed Futures webinar.

Khanyile understood early on in her career that not all creative companies embrace creativity and allow space for people to be creative. She then began working as a freelance actor in the television and film industry in South Africa where she found brief success but more importantly, encountered powerful men who acted as gatekeepers to who got opportunities and who didn’t, based on who was willing to play the “game”. As a young, vulnerable 23-year-old woman, she decided to take herself out of that toxic atmosphere and decided to pursue her MA in documentary filmmaking at Columbia University, New York. After the completion of her course, she returned to South Africa in 2008, at the height of the financial crisis, unable to find jobs in media.

During this time, she began working with a performance collective she had started at UCT as a student, tapping into a parallel life and language she had and began creating work again. She soon realised it was difficult to support a family as a freelance actor/creator alone. That is when she transcended and turned to process design and facilitation where she applied her skills and learnings as a theatre-maker.

“It gave me the opportunity to think deeply about how do we bring people together in meaningful engagements?” Khanyile shares. “What is it that creates the magic in a room between people which allows for impactful and meaningful conversations to take place? I think that the skills that I’ve learned in drama school definitely feed into that thinking. And I’ve been doing a lot of thinking around what do I know how to do? Where’s the need? And how can I bring the things I know how to do, to bear in speaking to a need that exists.”

Resonating with Khanyile on how theatre-makers and actors in the industry have very little control over their own journey, Clara Vaughan, one of the speakers at the conversation and head of The Market Theatre Laboratory in Johannesburg, adds that a complication drama schools in South Africa and around the world face today is how to relate to the industry as a training institution. “I think we all suffer from a certain degree of being very immersed in our own worlds. The determination to lift your head and look outwards is really important,” she states.

The Market Theatre Laboratory (MTL) is the educational arm of Market Theatre in South Africa. According to Vaughan, it exists for the benefit and development of emerging theatre-makers, mainly between the ages of 18-35 years, who are from poor and marginalised backgrounds. Informed by the word ‘Lab’, “it is driven by ideas of learning by doing. It’s a highly practical space where students spend most of their time on the floor,” Vaughan says. The emphasis is on learning by doing, learning through experimentation, failure, through repetition, reflection and exchange.

Within that space, Vaughan sees her role as creating an environment that enables participants to find their poetic, artistic and socially engaged voice and purpose. “What I work towards is creating an environment that is both safe and challenging. I often think a huge part of my job is to put people in proximity for processes, projects and allowing all that they have to offer, to feed in, in an organic way to the development of each person and the space of creativity and storytelling. The idea is to create a sense of shared purpose,” she asserts.

Elaborating on how her theatre learning feeds into her process facilitation work, Khanyile adds she is currently undergoing coaching training where she’s hoping to create her own model of an embodied approach, using body work, breathwork and voice work to be able to work with people, especially black women. “It’s in my heart to work with black women, because I feel black women are the latent force in South Africa, you know. When black women thrive in this country, we can all thrive,” she believes.

Khanyile describes South Africa as a deeply traumatized and divided country where mental health issues abound. She feels people do not know how to have conversations across lines of difference. “We do not know how to hold complexity, how to have difficult conversations rooted in love. And I think for those of us who’ve spent time and years building these (drama-related) skills and tools, we need to be thinking about how we can speak to the need. There are great needs. How can we bring the things we know how to do, to speak to those needs?” she asks.

She also shares her experience of facilitating at a conference project for the United Nations. She found it incredibly challenging since it was a formal, traditional rules-based environment where things worked a certain way and people related to one another a certain way. Khanyile shares despite the challenges the UN officials knew they needed to work through, they needed an engagement that would bring people on board and one that needed certain things to encourage such participation among them.

“So, I had to give myself permission to come to that space and bring ideas that were not normal in that setting. I didn’t know how people would respond to saying, ‘Let us begin every workshop session with a meditation.’ How do you do that with high level dignitaries at the UN? It’s a difficult proposition to make, because you feel like people are going to look at you like you’re crazy,” she says.

“And at the same time, I’m being expected to think deeply about certain things: how do we create space for that kind of thinking to happen, if we don’t allow ourselves that chance? I really had to give myself permission to bring myself freely, and all of my creative tools to an environment that felt very alien to that way of thinking, and the response was so positive and so encouraging, which is yet another signpost that says there are opportunities here.”

Discussing the challenges of doing this work in the digital space, Khanyile says some of the crucial questions she faced were how to create a sacred space virtually within an invisible architecture while ensuring the engagement remained deeply co-creative and not extractive.

Speaking of the challenges she faced, the past year for Vaughan has been about redefining her understanding of how to create an empowered theatre-maker and letting go of her idea of an ideal pedagogy. “I have been sitting with what we teach and why,” she says. “At the moment, the industry we are preparing our students to go into, is decimated. It’s not that COVID has created a new industry or a new scenario; it’s just revealed the brokenness of what was already there and accelerated our need to really respond to that and our need to acknowledge that reality. And so, the question is how do we prepare young people to take on their future with a sense of control?” Vaughan also urges the community to change the vocabulary of an actor’s journey, where greater emphasis is placed on ‘the right place at the right time’, ‘good luck’, ‘meeting the right people’ etc.

She says it also includes changing one’s attitudes towards what a theatre-maker is and isn’t. Vaughan feels there is a need for expansion of the possibilities that theatre has for relevance and integration. She insists on finding a better language for the skills, knowledge and practices that those with theatre training have and to recognise how fundamental they are to being human, in a society and community. It is also essential to understand such skills are not just for a very specific medium and a very specific industry.

“So rather than saying, ‘I’m a theatre maker’, and expecting the rest of the world to assume a bunch of implicit practices and skills that you have, it is imperative to be able to put that into words, and as Ndoni mentioned, to really be able to own what that is,” she asserts, adding that people with drama training must be able to do so with confidence, without being apologetic about the value of what they bring to the table. “It means being in a virtual room of UN dignitaries and saying – this is how you are going to participate better, because I know how to make space that enables that – and to really be able to know that that’s what you can do. And that, that is extraordinary and unusual and specific.”

As the conversation veers to an end, Khanyile and Vaughan encourage institutions to look outward and work with each other, instead of working exclusively.