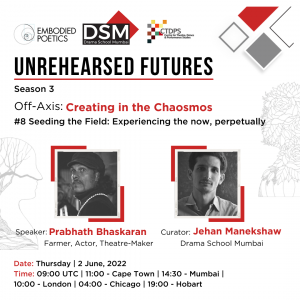 We live in a world where we are conditioned to look for stability and balance. But if the events of the past two years have taught us anything, it is that we live in a perpetually chaotic world where we try to find and establish order.

If we are to accept that we live in a chaotic cosmos, or a chaosmos, how do we navigate it? At a recent Unrehearsed Futures conversation, we posed these questions to Dr. Prabhath Bhaskaran, an actor, theatre-maker and farmer currently based in Japan, who lives on his farm called ‘Chance Meeting Anandam’.

The notion of ‘chance’ – it is something Prabhath has been investigating through his performance research and practice since he was 7 years old, when he began learning Kalaripayattu, an Indian martial art form. Those who are familiar with the form will know that it involves a lot of kicks and jumps – which essentially throw one off-balance for a short duration of time. For a long time, Prabhath has been investigating his understanding of nature, energy, body, balance and gravity.

During the conversation, Prabhath took us on a virtual tour of his farm in Tokigawa – his rice fields, chicken farm, and vegetable farm. Nestled next to the mountains and forests, at Chance Meeting Anandam, Prabhath practices the idea of farming from seed to seed i.e. they don’t buy their seeds but rather use them from what they harvest.

The farm is also designed as an open-air theatre. After harvesting, the place becomes their performance space, where they invite local villagers to watch performances, cook for them and later have dinner with them. The garage is the space which they use for rehearsals and practicing Kalari daily.

The idea for such a farm was planted in his mind a few years ago when he was teaching drama at Pondicherry University where he devised a project titled ‘Cycle Yajna’, that was performed across India and Sri Lanka in 2015.

This project focused on bringing members of the local community become active agents in the theatre-making process. “The main idea behind that was that some of my students who belonged to the villages had their friends and relatives who were farmers. In 2010, farmer suicide was very common, and many farmers had committed suicide in that village. So, someone from the village came to me and asked me what I could do with theatre in that place so that they could somehow have an escape from suicide,” Prabhath shares.

Cycle Yajna is an old theatre form in India, where a person cycles for 10 days continuously and every evening different kinds of performances of song, music, dance and theatre is held. In this particular project, Prabhath interacted deeply with farmers.

While training and rehearsing with these farmers near Pondicherry, Prabhath understood farming more deeply. “I almost became a farmer because I was working with them every day. In the morning, we would work with them and then we would invite the farmers to our show and then they worked with us. That was the kind of exchange program we had where I learned farming from them. They made me farmers, and now they have their own theatre,” he shares.

Even after the pandemic, Prabhath continues to have performances every Sunday. The performers are, again, local farmers. The kitchen, the farm become a space for people to gather every week and discuss ideas and thoughts. Even in the chaosmos of the pandemic, the work continues.

The thing with living in a chaosmos is that one never knows what is going to happen next. No amount of planning can foretell what is to happen. Impermanence is an integral part of being in this space. And this is something Prabhath embraces with his ethos at the farm. They don’t buy many things on the farm – only salt, sugar, fish and some other things – so that it is not difficult to leave things behind.

“As an artist, I have always inquired about the idea of nature and energy, and body, balance and gravity,” he says. “I’ve been researching and studying and teaching for a long time. So, [the farm] is a place where we started exploring the connection between body and nature, the connection between the body, energy and the earth. How does energy travel inside our body? How does it balance the imbalance when moving from stillness to movement?”

Prabhath admits that each teacher of his put a seed in him, that grew to its fully in its own time. If one plants a cucumber and teakwood at the same time, the cucumber will grow faster unlike a teakwood tree. So, when he became a farmer, he relived and understood many teachings of his teachers and mentors in a new light. Many years ago, when he decided to become an actor, his Kalari teacher asked him why he learnt Kalari. Prabhath, in turn, asked his teacher why he taught Kalari. To this, his teacher responded that 70% of Earth is filled with water – including saltwater – but people still suffer for drinking water. By doing Kalari, one can turn that water into drinking water. Prabhath never understood what he meant as a child. “Now I understand what he meant,” he says, “that practicing Kalari, or any kind of martial art, gives you a new way to move, which you wouldn’t have thought of earlier. It re-forms your body.”

Kalari, Prabhath says, is all about gravity and anti-gravity.  In Malayalam, the word for gravity is ‘gurutva’, which also means ‘attachment to one’s teacher’. “When we jump in the air in Kalari, there is no balance,” he says. “When you start thinking about doing something, you become unbalanced. You then play between balance and imbalance. And that is the point of creativity, I think.

I love to play. I think the chaosmos makes you creative. You can see this all over the world. The best creations happened when we are unbalanced. We are in chaosmos. We don’t know what to do next. That moment of ‘not knowing’ is theatre for me. That moment makes me happy, gives me ‘anandam’ (joy) to sustain in the theatre,” he elaborates.

As a child, Prabhath wanted to learn Kalaripayattu to become strong enough to be able to fight with his friends. He wanted to become a hero. He never thought about flexibility or the min-body relationship when he began training. But the training process can be quite painful. There were times when a young Prabhath would cry and would want to do no more, but his teacher would push him to stay a little longer, plant his feet softly on the ground but imagine a roots erupting from his feet into the earth – flexible, elastic roots that would still allow him to move.

In these hours of practice, there would one moment where one will forget what is happening in the world around them. That’s when he found a spiritual practice in doing Kalaripayattu. Prabhath’s worship is to his gurutva, his gravity, the energy flowing in his body, everyone else’s body and nature. In a way, his practice is a worship of trying to understand chance better.

“We think we are different, but we are not different. We are part of this nature. We can’t escape it,” he believes.

As the conversation comes to a close, he confesses that he loves chaos.

Prabhath has been learning structured forms such as Kalaripayattu, Kudiyattam, Noh, Butoh; where is the space to flow in a chaosmos then? To this he argues that in all these forms “you go through the structure in a balanced way, practice, and then face the chaos; then you play in imbalance.”

We are taught that chaos is dangerous and unsafe. If there is anything we took away from Prabhath’s provocations is that chaos is just chaos, a flow of energy on its own, and not an indication of being unsafe.

Unrehearsed Futures (S3) #7 The Arc of The Dervish: Learning New Consciousnesses For An Ever-Changing Reality Amplifying The Queer Voice: Lessons from Queer People in the Performing Arts Industry