Unrehearsed Futures #9: Pedagogy in the time of Multiple Disruptions with Sara Matchett 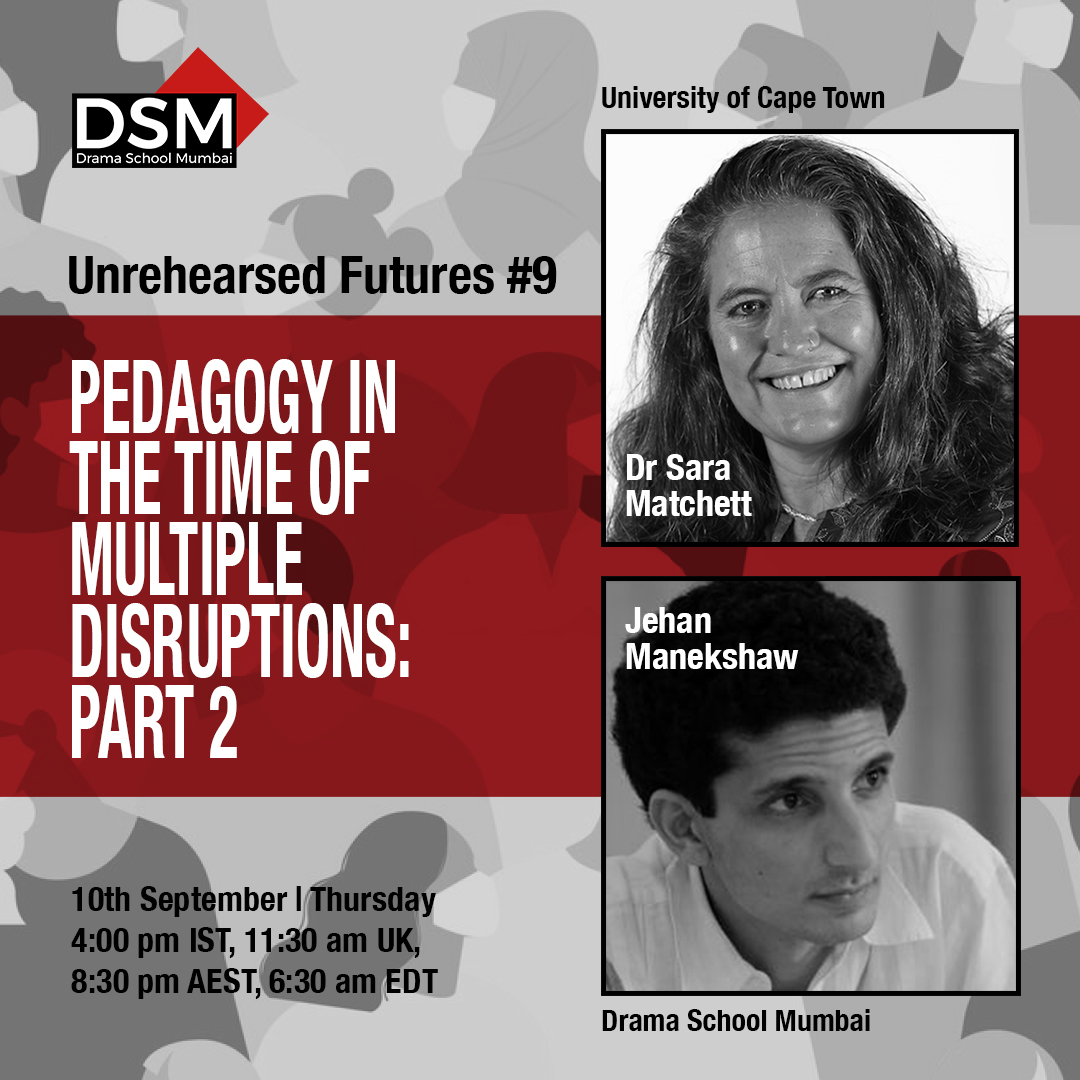 When the COVID-19 pandemic began, many thought of it as a blip in the road which would last for few weeks, and life would go back to how it was in a short period of time. When lockdowns, in countries around the world, began being extended, the pandemic was viewed as a pause in normal daily life. Six months in, it has turned into a pregnant pause in our daily lives, except no one knows when it will end.

The pandemic has also challenged one’s perception of normalcy. It has forced institutions, including educational, to rethink their philosophies and the way they work. It has compelled the world to take more notice of what had taken for granted.

Without a doubt, the pandemic has been a source of major disruptions, upending millions of lives in multifarious ways. For theatre practitioners, it was like being banished from one’s home. Within the theatre realm, things that were thought could never be done online –teaching, performing, watching – transitioned into the digital space within a few weeks. While for many, it is the first time experiencing such a massive disruption, it is not so for Sara Matchett, the new head of Centre for Theater, Dance and Performance Studies at the University of Cape Town in South Africa.

Pedagogy in the time of socio-economic disruptions

The University of Cape Town (UCT), and other universities in South Africa, have been facing a series of disruptions since 2015. In March 2015, Rhodes Must Fall began as a protest movement, originally directed against a statue at UCT that commemorated Cecil Rhodes. The campaign for the statue’s removal received global attention and led to a broader movement to decolonize education across South Africa’s tertiary institutions. In October, the Fees Must Fall movement, a student-led protest that grew out of Rhodes Must Fall, gathered momentum demanding to stop increases in student fees as well as to increase government funding of universities. This continued into 2016. In that year, in October, the campus where Matchett is located, was occupied for nearly two months. The university shut down from mid-September to the end of 2016, which meant students couldn’t finish the academic year (In South Africa, the academic year begins in February).

This meant that they finished the 2016 academic year at the beginning of 2017 and began the new academic year later than usual. In October that year, a smaller Fees Must Fall protest took place due to which the campus was closed for two weeks.

In 2019, a first year student was gang-raped and murdered at a local post office. This sparked a series of protests against gender based violence and femicide in South Africa. The UCT campus was closed for a week. However, students did manage to finish the academic year in time.

So, when South Africa president Cyril Ramaphosa announced the lockdown in March this year due to the COVID-19 pandemic, Matchett felt they had been here before. “But what the COVID pandemic has done, I think, is bring questions of equity, and accessibility to the fore. It has highlighted the inequalities that are so pervasive in South Africa,” Matchett said at a recently held Unrehearsed Futures webinar.

When the lockdown was announced, Matchett and her team decided not to teach any of their studio work or practical courses online and instead, focus on theory courses which could be taught asynchronously. A maintenance course for physical and vocal conditioning was provided to students and they were encouraged to engage in self-study.

The emphasis on asynchronous learning makes complete sense when a large majority of students come from underserved communities, says Matchett. “Many of our students live in remote areas where access to the internet is dodgy. The bandwidth doesn’t allow for any kind of synchronous connectivity and many of our students live in very, very small homes with many people. In some instances, one or two rooms shared between 5-8 maybe more people,” she shares, adding that the University made provisions to provide laptops and/or other devices to students who didn’t have them. Additionally, students were also provided with monthly data bundles to help them cope with their online classes. However, what transpired was that in many instances, the data and laptop was shared amongst family members, which meant students ran out of data much before the end of the month.

During the lockdown, Matchett figured if she could get students who live in residency back to their residence, they could start a blended approach to teaching that involves synchronous online teaching combined with face-to-face teaching. After much toying about, the UCT executive agreed to this. The government also announced that inter-provincial travel would be allowed from 18 August and that 66 percent of university students could return to campus. This meant, courses which require students to be in lab-type teaching spaces, such as Matchett’s, could return to campus. “And we had our first cohort of students come back onto campus this last Monday (14 September),” she says.

While Matchett feels she has surprised herself with the online teaching experience, she feels it is a good time to address and action questions of decolonizing the curriculum. “I don’t think we have yet fully decolonized the curriculum. This COVID-19 pandemic has come at an important moment and provided us with the opportunity to really looking at our curriculum and try to understand what a de-colonial curriculum looks like. I think this is the perfect opportunity for us, as an academic institution, to actively engage in shaping the future of the theatre and performance industry in South Africa, instead of letting it guide what we teach. In other words, letting it guide the processes of training performers for an existing industry,” Matchett believes.

When the Rhodes Must Fall and Fees Must Fall movements took place, departments within UCT did begin to respond with regard to restructuring the curriculum. “But my sense is that it’s a bit of a Band-Aid situation. In terms of employment equity, teachers have been changed. And emphasis is placed on employing black South African Africans. In terms of staffing and curriculum, things have changed, but I don’t think they have changed fast enough. The students feel that the whole process of decolonization hasn’t been as rigorous as they were pushing for,” Matchett says, adding that one of the reasons for the delay in change is that it takes nearly two years to introduce any change in curriculum with the bureaucratic structure of the university.

One of the ways in which the theatre curriculum has been decolonized, is through providing courses in languages other than English: isiXhosa and Afrikaans, two of the 11 official languages in South Africa. For example, a cademics at the Centre for Theatre, Dance & Performance Studies have, together with students worked on translating canonical texts such as Shakespeare’s Macbeth into isiXhosa. “It worked beautifully. The students were involved in the translation of the text together with their lectures at that time,” she shares, adding that there are beautiful heightened texts in these regional languages, which are no less than a Shakespeare or Ibsen text.

Matchett strongly believes that theatre will return and that the current situation is an intermediary phase. In the mean time, she sees the pandemic as an opportunity to explore digital and non-physical spaces such radio. “We’ve actually just purchased a whole lot of equipment to revamp our recording studio. We haven’t done any radio or audio work in a long time. And as a voice teacher, that’s my main area of pedagogy. I’m quite excited about the possibility of exploring audio performance,” she says.

In this changing landscape, she also feels as a theatre and performance school, they might now need to teach their students how to create and establish a YouTube channel, how to create digital installations or digital art or how to create content on TikTok. “I think it’s important to sit with the students to find out what skills they need.”

During the course of the pandemic, Matchett realized that this global health and economic disruption has highlighted the importance of creating communities of care. She says it is crucial to do so because of social inequities and gender violence on campus and in the country as a whole.

To give an example, if a student has to rehearse till late at night, say 10 pm, they have to wait for a shuttle bus to take them back to their residence that is 10 kilometres away. Sometimes, the student is waiting in an unprotected area, sometimes the bus does not arrive on time. And sometimes, it drops that student off at a point far away from their residence, compelling them to walk the rest of way. “South Africa is a very violent society. Creating communities of care means looking at how we can shift these bureaucratic systems within the university. How do I speak to the transport service and make sure they have a bus that drops the student at their residence rather than at one central point when it is unsafe for students to walk home in the dark?

One of the first things Matchett and her team did, when the lockdown set in, was to call up students and speak to them, instead of sending emails. “They couldn’t believe that we had done that, because no other lecturer in any other department had contacted them. I think, because as theatre practitioners, what we do is so relational, that this was the most obvious thing for us to do,” she explains.

In a bid to encourage more care for one’s community, Matchett hopes, for example, to establish a kitchen garden at the school in the future where students come together and do community work for an hour in the morning, where they grow vegetables to be collectively shared. This will also hopefully begin to address food security issues that the pandemic has escalated. “My intention is to foster a community that is not just about going into class, to learn skills and techniques. But rather about caring for one another, in an environment that is becoming increasingly uncaring,” she elaborates.

As much as there has been a lot to learn from this pandemic, Matchett is hoping that there isn’t a second wave of the disease, disrupting teaching again and wishes to believe that it is only an interim phase.

Unrehearsed Futures #8: Pedagogy in the time of Multiple Disruptions with Janice Poon Transformation Into Character with Micaela Miranda