Unrehearsed Futures #8: Pedagogy in the time of Multiple Disruptions with Janice Poon 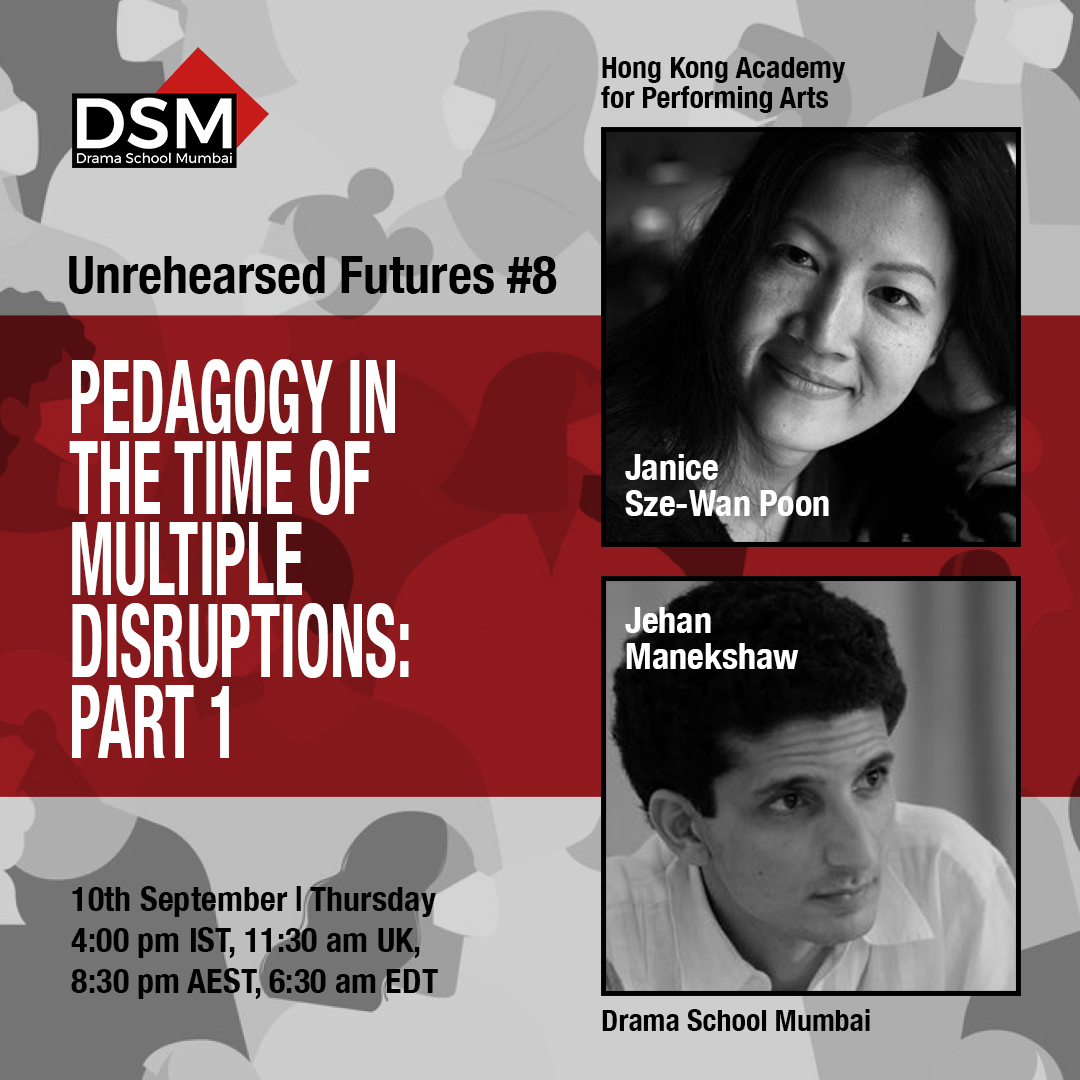 There have been many attempts to make sense of the ongoing COVID-19 pandemic. At the most basic level, it is a global health and economic disruption that simply brought life as we knew to a halt. Theatres closed their doors, drama schools could no longer teach in physical spaces, people lost livelihoods, deaths were reported at alarming rates all over the world.

Living through disruption is not new to Janice Sze-Wan Poon. She lives and teaches theatre in Hong Kong, which has been seething with pro-democracy, anti-government protests since June 2019. As a teacher and academic project officer at The Hong Kong Academy for Performing Arts’ (HKAPA) School of Drama, Poon and her colleagues had to deal with issues such as closure of the Academy during the protests in 2019 and the pandemic in 2020, due to which students lost the opportunity to perform onstage in School productions. When the School shut again in early February 2020 due to the pandemic, the School shifted all their teaching online. In the talk series named “Unrehearsed Future”, she shared her teaching and directing experience during the lockdown period of the pandemic.

The protests in Hong Kong began with the main objective of compelling the government to withdraw a controversial bill that would have allowed extradition of fugitives to mainland China. Critics were worried that the Xi Jinping-led government could use the bill to prosecute people for political reasons under China’s opaque legal system. The peaceful demonstrations soon turned into violent clashes with police. The movement grew quickly to include four more demands, which reflect a long-standing call for democracy. According to Hong Kong Watch, since 9 June last year, 10,016 people have been arrested (as of 8 September, 2020).

Most recently, China passed a new national security law for Hong Kong, making it easier to punish protesters and reduce the city’s autonomy.

This political disruption, coupled with the disruption caused by the pandemic, has been a disturbing time for Poon and her students.

“Teaching and learning has been totally disrupted,” she says, “I still remember I was so, so afraid to watch the news every night in the second half of last year. I was so afraid to read the newspaper. I was so afraid to receive phone calls in the middle of the night. I was so worried to see my students or familiar faces on the news. It is a very disruptive moment for us in Hong Kong.”

All of this has had an adverse effect on students who are emotionally disturbed and vulnerable. “My students are losing hope. They are in a desperate situation, in terms of emotions. It is an accumulative effect of the political movement, the COVID-19 pandemic and not being able to go back to school,” explains Poon.

The lockdown also exposed the inequities of not learning in a shared space. The living space in Hong Kong is very tiny and crowded. Many students live with six or seven family members in a small one-room tenement. “When you have online classes, and students turn on the video, you can immediately see the kind of environment they are living in. And, of course, not many of them have very good Wi-Fi. They don’t have good computer devices either. And these are, for us, very basic technology that support our teaching, but for them, they don’t have the money or are not that well off to equip themselves with such learning technology,” says Poon.

In order to bridge this gap and make learning relatively easier for students, the School of Drama supported students by giving them sim cards for good internet connection. The case of student resilience

In April, students began texting Poon and asking her about what will happen with their production, because for many of them it was the final year of their studies which made them eager and hungry to perform. They were losing hope in their future, about being a theatre practitioner, shares Poon. “So, for me as a teacher, theatre became the only hope or the only survival kit for me to give hope to the students. That’s really the only thing I can do,” she says, adding there were times when she had to make students promise to show up for class the next day, because they were emotional about everything that was happening around them and to them.

As a result, Poon and her students decided to do a live online performance of UK playwright Simon Stephens’ play Pornography. Poon points out that the students were not taught to perform in front of a camera, even a laptop camera and she hadn’t been taught how to direct an online production, though she had developed different forms of online performances when she was an artist-in-residence in New York a decade ago. “But if that’s the only way I can give some hope to my students, if that’s the only way I can get them together and form a community where they can support each other, I will do it. I will do whatever I can to give hope to them,” she says.

And so they began rehearsal.

Pornography was written in response to the euphoria and promise of the 2012 Olympic announcement into the devastation caused by the July 2005 bombings in London. In six seemingly unrelated stories, Stephens paints a compelling picture of the oddities of ordinary Londoners yearning for love in the midst of human lives and condition being commodified.

“The students found that the characters resonated a lot with their own lives, because of how the society and situation is in Hong Kong right now. And I think that’s when they get connected, with not only the characters but with the human condition as well. When they read the play, they cried and, they laughed. It is tiny moments like these that became so precious in front of that little hole, that little camera on the laptop which we never thought we would have to use it to communicate and to do a play,” shares Poon.

They decided to perform on Google Meet, a video conferencing platform similar to Zoom. They first investigated all the functions of the platform and tried to use the different functions during performance. Poon shares that she learnt a lot from her students in this process about how to use technology and find a cinematic yet theatrical language in this medium.

More than Poon could have imagined, students displayed an unexpected sense of resilience during this time. Many lived in tiny spaces and had to rehearse there. Poon gives an example of a boy who didn’t have his own room and rehearsed every day in his tiny living room where he put a sheet of cloth around him to separate his living space from his performance space. “His family members can hear everything. He was so brave to still perform. In one of the scenes, his character becomes kind of violent, yet he still performed it with his family sitting a few inches away,” commends Poon. In fact, this also showed how supportive their families were during the pandemic.

Many of them shared the living room. Often, during rehearsals, one could hear a baby crying in the background. “One of the students was rehearsing sitting next to the toilet. Every time I rehearsed with her, I could see her father crossing to go to the toilet and hear the sound of the flush. Despite these distractions, she was still so concentrated on that tiny camera in front of her as if there was nothing happening next to her. The thing about performing for an online medium is that you don’t know what is being capturing. You don’t know if you have done enough. You don’t know if you have exaggerated it too much. I have to say, they all have my respect,” says Poon with admiration.

Some of the scenes were very intense, says Poon, such as one where there is a love affair between a brother and a sister. Poon threw in the idea of making the audience believe that they had had intercourse without showing it. The students agreed and rehearsed on their own and showed it to her and received feedback. While the living environment was not very desirable for performance, the students tried their best to focus. On the day of the performance, they would go over to their friend’s house, who has a room of their own, to perform.

In the end, Poon and her students managed to put up a performance spread across a week, one day for each scene, owing the difficulties of watching a play online for an hour or more. They received a good response for it and Poon is glad that they did it. “I could see the change in them. At least I could see that they were energetic and began looking forward to going back to school and rehearsing in a physical space again,” she says.

Poon and her students did get to go back to school when lockdown regulations were relaxed. They began rehearsing for an immersive production of Pornography. A lot of choices they had made during the online production, made their way to the aesthetics of the immersive form. Unfortunately, they could not see it through since the school was closed again in July, when a student at HKAPA was diagnosed with COVID-19.

Changing student-pedagogue relationship and planning for the future

The experience of holding space for students online changed Poon’s approach to understanding a pedagogue’s role in their cohort’s learning. In terms of what is happening in Hong Kong, she found there was a lot of anger among students. “I realized that when they ask me questions, they might necessarily not be looking for an answer. They just need an ear to listen to them. They have a lot of things they want to share. I learned,” she pauses and continues, “I learned to walk with them more, than delivering knowledge and skills. I know that’s the primary responsibility of a teacher to extend knowledge but we are encountering multiple disruptions. I learnt that listening, laughing and crying with them is the most important thing a teacher can do.”

When comes to running a drama school and planning for the future, in lieu of the current situation, Poon believes how schools understand planning has to change because no one knows how long the pandemic is going to last. “Theatre began as a ritual and offering in ancient Greece but it was also a symbol of citizenship the ancient Greeks shared in the form of a performance. That’s very important for me,” she says, adding there are things that will not change, even if theatre is done online.

“The essence of drama won’t change. It is about storytelling. It is about sharing the human condition. For me, the purpose of a drama school is to encounter the human condition,” she elaborates. She also clarifies that this does not mean that we only have to do online theatre from now onwards and forget the physical space. She looks at the online medium another stage for theatre practitioners to explore.

Lastly, Poon asserts that if working online is the only way to continue doing theatre, she will take the digital space and turn it into another stage. “I am seeing it this way: regardless of being a proscenium theatre or a black box, that’s a stage. The online platform is the stage for me. And I have to find the language of that particular stage, be it virtual or in a physical theatre,” she believes.