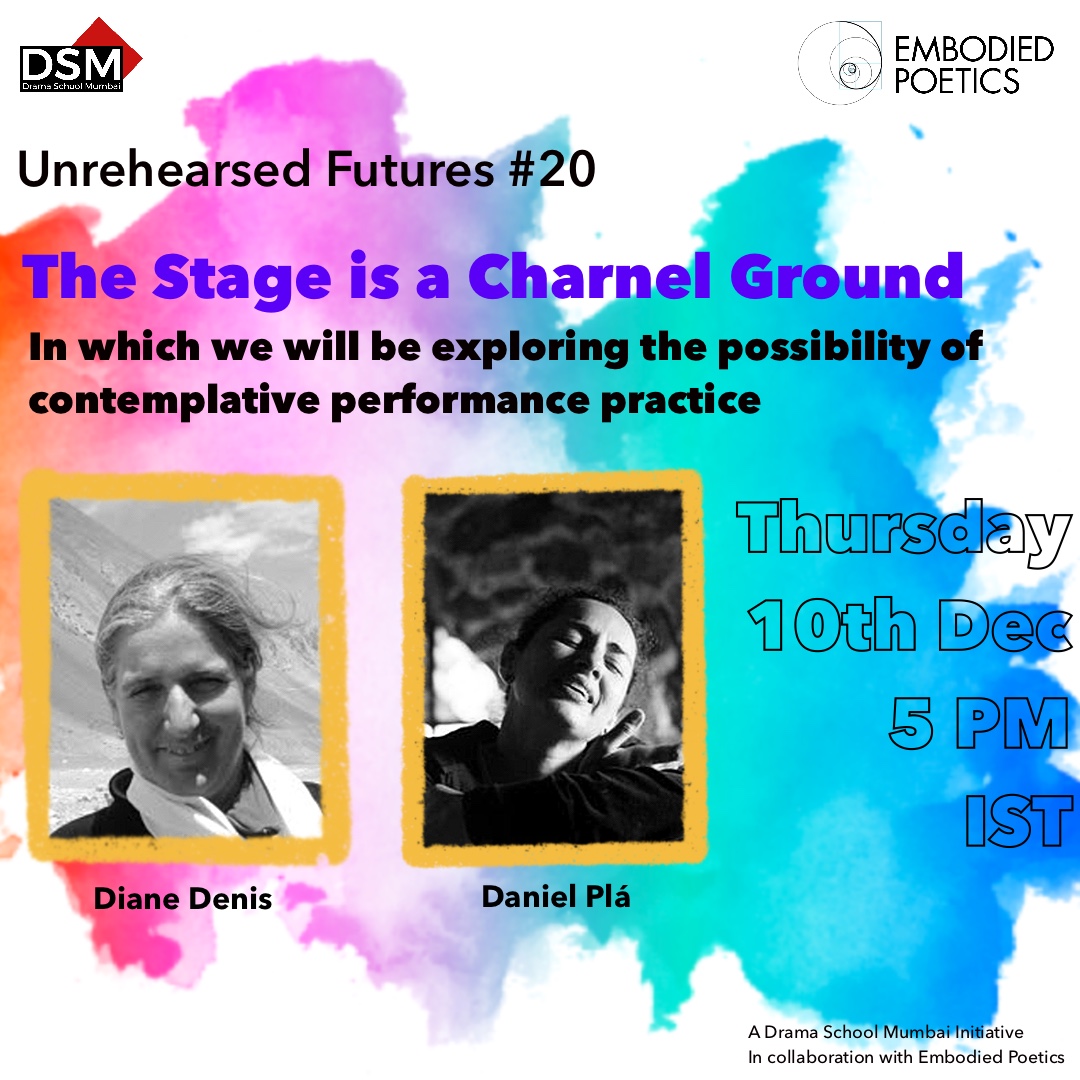 In a few months, the world will have gone through the disruption caused by the COVID-19 pandemic for a year. A lot has changed since it began: the world went into a lockdown, businesses shut shop, people lost their livelihoods, the meaning of being in someone’s physical presence changed completely, Zoom became the go-to place for sharing space. For the theatre community, it forced makers and pedagogues to contemplate on what is theatre, what the lack of gathering in one physical space means for the future of the form and its pedagogy. This period in time also forced the community to sit at the charnel ground of theatre and look inward, sit with uncomfortable parts of it, and begin to work again from a space of emptiness, allowing a change within.

Daniel Reis Plá and Dr. Diane Denis, both contemplative arts practitioners, shared at a recent Unrehearsed Futures webinar that they believe performance is meditative and that the stage can be seen as a charnel ground.

For Plá, a lecturer at Universidade Federal de Santa Maria in Brazil, using contemplative practices in performance is about transforming people, allowing them to discover new perspectives of themselves and the world around them. It involves cultivating potentials, creating awareness of one’s life and potentials, he says, adding that it means coming back to one’s body, to one’s senses, to one’s home.

“So, the contemplative approach for me is that we come back to this basic wisdom of the body and the body in relation to its space and environment. It brings something new to our perspectives in the way we see each other and ourselves, and makes us aware of the responsibility we have.”

Contemplative practices abound throughout human history and are a crucial part of the fabric from which people build meaningful lives. Some of finds its roots in sacred rituals of different religions such as chanting, prayer, ritual performance and meditation. At the moment, Denis shares that she is confined to a Tibetan monastery in Nepal where she’s been observing the rituals they perform.

“And I keep thinking that it’s so close to theatre. So, so close to theatre. The element, which strikes me the most, is the confidence with which these young women perform those rituals. There is confidence that, all of these words, gestures, offerings actually have a consequence. For them, these actions have a positive impact in the world, all that they do is not empty of meaning,” she says.

“And there are no questions about it. There is an aloof, impersonal, yet heightened sense that each action, each ritual object has power, a connection with the betterment of the world. The thing is that now in our world, in our different communities and as artists, the meaningfulness of our work is slipping. So how do we regain that confidence? How do we regain a sense for that?”

Denis feels that cultivating that sense of meaningfulness is crucial in a world cloaked with disruption, for the individual and the collective.

Plá recalls an instance from 2003 when he was pursuing his MA and studying the Red Tara ritual from Tibetan Buddhism. He found that the lamas or senior practitioners who were chanting had a presence that reminded him of the presence an actor is required to have. “So, the way I see it, the relationship between rituals and performing arts is the possibility of using the tools of rituals to refine our perception of ourselves in the world. Perhaps that is why the lamas and monks have this strong sense of confidence and presence. They are in this vertical process of making their awareness broader and so they can see more than we can actually see,” opines Plá.

Doing theatre, be it on stage or off stage, involves meditating on the self, like how one does at a charnel ground. A charnel ground is an above-ground site for the putrefaction of human bodies. It is where Buddhist practitioners meditated to gain insight into the nature of living. “The charnel ground is a place where people go to meditate on the impermanence of life, to meditate on the nature of self,” Plá says, while adding, “And it is these kinds of practices, these rituals that can be used to refine our awareness.”

Denis looks at performance as a charnel ground, a way to meet fears, endings, and raw emotions, a way of personal transformation. No collective transformation is possible without individual transformation. From this point of view, the stage is a path, and the path, a creative process. The impulse in such approach is not so much oriented toward the production of something – or perhaps one could say that the goal is the path.

While these traditional Tibetan rituals have a set structure to them, contemplative arts practitioners like dancer Barbara Dilley used them as tools to develop a Dharma art practice called contemplative dance, a sort of postmodern relinquishing of form, meaning and structure.

“I think that’s a really inspiring bridge because the traditional rituals have an extremely tight forms and then we have people like Barbara Dilley, who use this type of structure in a minimalist form to let that inherent wisdom or inherent awareness, expand,” explains Denis.

Dilley performed with the Merce Cunningham Dance Company in its early years (1963-68) and later became a leading force in establishing a dance program at Naropa, a Buddhist contemplative community. She developed her practice from the understanding that the present moment is always an occasion. In one of her interviews, she said that her minimal structure was inspired by the teachings of the founder of Naropa, Buddhist master Chögyam Trungpa Rinpoche. “For me, it sums up a kind of instruction for the training: No matter what we do in this landscape of improvisational exploration, if we are able to stay in this very moment, all of it is expressive,” Dilley said.

The ‘jewel’ within a contemplative approach, Denis says, is the space it allows; the freedom it provides for discovery. The mind/heart actually opens up in this process. “The exploration of movements begins. Nothing is predicted, everything arises. The whole idea is to observe one’s own mind. It seems that the defining of the outer form (the space and time) creates the inner space and allows one’s inner reality to reveal itself,” she says, “But the inner and outer looking eye are neither separate nor exactly the same things. So, you end up creating within a formless space, and that influences the way you relate to yourself.”

Apart from Dilley, Lee Worley, Arawana Hayashi, Jerzy Grotowski, Thomas Richards and Mario Biagini delved deeply into using contemplative practices in performance. “And I think it’s interesting because Grotowski had this approach where the sacredness was not separate from everyday life. He talks about objective drama that has an effect in the world, an effect in oneself,” explains Plá.

He believes that this contemplative approach to performance is a gentle and more mindful approach to actor training. “I was built in an environment where actor training was about setting a war against the body. I had to do this and that to achieve such and such goal. So, I had to train for eight hours every day, and it didn’t matter if it hurt, because I had to achieve a certain goal.

However, this approach from Dharma art is completely the opposite,” says Plá. “It is looking attentively at the body, looking attentively to the space and the sacredness that is still here. One of the things I think is beautiful in meditation is that enlightenment is in the here and the now, in this very moment. And I believe that art can give us this same sense of sacredness.” Using contemplative performance practices in his work as a practitioner and pedagogue, Plá found that he didn’t have to force something in the body, but rather let movement manifest itself from stillness.

Denis calls upon for radical kindness and patience towards one another as this kind of contemplative work does not yield results right away. It needs to be offered as an opportunity again and again, she says.

At this moment in time, Denis and Plá both believe that it is a unique opportunity to change the way theatre and performance is taught around the world where it marketed as a bag of tricks and techniques a performer will have by the end of a course. Instead they encourage that drama schools around the world adopt contemplative practices in teaching the same techniques, be it Stanislavski, Lecoq, Chekhov etc and offer students the freedom to expand their potential and live theatre in their daily life.

What is the function of an artist in society? Stepping Stones: in an actor’s journey