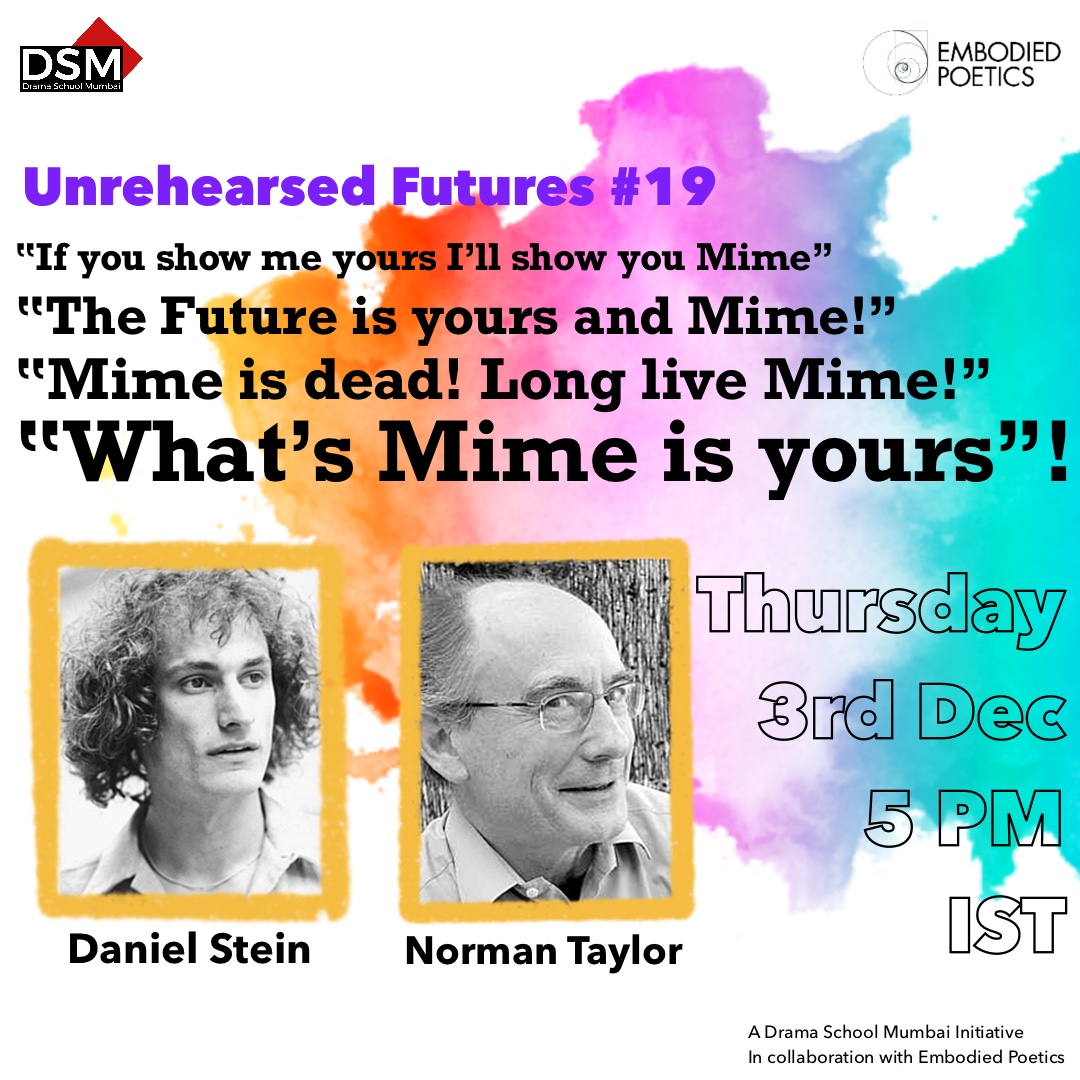 As an art form, mime is essentially about expressing an idea or story through physical movement, without words. It exists between acting and dancing and is often compared to it. Marcel Marceau, the French mime artist is considered to be one of the greatest pantomimes of the 20th century and the art form itself gained a lot of popularity because of him.

Over the last few decades, pursuing and performing mime professionally and studying it as a serious art form has been on a decline as the number of amateur and street performing mimes grew. There are a handful of mime companies around the world and a handful of festivals on mime. So much so, that some contemplate if mime is indeed dead.

Norman Taylor, one of the remaining few first-generation masters of Jacques Lecoq’s method, disagreed with this at a recent Unrehearsed Futures webinar.

“Mime cannot be dead. In fact, it depends on what we mean by the word ‘mime’. Is it a style of theatre? Or is it the very essence of life?” he asks.

Taylor believes mime is the very essence of being. He gives the example of a human baby learning to walk. “When we are young, we walk on all fours. And then we see the adults, who are standing up. And each adult walks a bit funny, but we don’t see that as a baby. Then, the baby mimes what he or she sees. And of course, they make all sorts of mistakes. They see that their foot comes off the ground. So, they lift up their feet, and they have this funny walk sometimes. But they are miming all this. We learn everything by miming,” he says.

If Taylor’s way of looking at mime is as a reflection of life, Daniel Stein, a senior lecturer at the Department of Theatre and Dance at the University of California, Santa Barbara, holds a contrarian view and understands mime from the perspective of theatre. He gives an example of how light reflects off a mirror and says that what Taylor refers to as mime is light being reflected back from a mirror. “This is what Norman is explaining as mime. We see something. We understand what we see and we try to mimic what, in fact, we have seen.”

But what Stein wants to say is that he understands mime as a product of refraction. “I come at it from a perspective that, instead of a mirror here, in fact, theatre is a prism. And so, what’s going to happen to the light when it comes in is that it is going to be broken. And instead of going back, as the whole light that came in, it is going to transform into a spectrum of colours,” he explains. As a modern performer of corporeal mime, Stein adds that he does theatre because he is interested in exploring the “splitting of the light we are seeing”, the life one sees and looking at the individual parts of that life.

The reason pantomime is no longer as often reflected on stage is because it is not nearly as useful as the other tools present in theatre, Stein believes. “Pantomime is the utilization of the negative mold,” he says. In mime, the negative mold is the shape one’s body creates to project the illusion of holding or referring to another object. For example, if a performer wants to show they are holding an orange, they would shape their hand like holding a sphere of some sort and the audience fills in the image of holding the fruit in their imagination.

“If I have a positive mold here, and I put my hand around it, I take the positive mold out and I now have the negative mold in my hand. I manipulate that negative mold to create a type of detailed story, which becomes a guessing game of what, in fact, am I manipulating?” says Stein, who also studied mime with French actor Etienne Decroux in Paris for several years.

When Stein went to Decroux, who had also taught Marceau pantomime, the former had moved on to a different chapter where he developed a new form of physical movement through corporeal mime. “And the reason he said he moved on to a different chapter is because, instead of playing a guessing game about what was in the hand, what are you going to do with what you have? Which is to say that we spend a great deal of time, both in theatre and in our lives, wishing we had something rather than exploiting what we have in the room that we are in,” suggests Stein.

However, Taylor and Stein both believe that one of the things that makes mime relevant today is its use in actor-training. It is well known that Jean-Louis Barrault studied mime with Decroux and used it to heighten an actor’s presence, using it as foundation to teach other forms. Taylor asserts that doing mime is an exercise in articulation. He shares an anecdote where he went to watch a play and the character on stage had to go to the table to pour wine in glasses. Taylor says he saw the character go to the table and reach for the wine bottle but he observed the actor using a corkscrew to open the bottle.

Decroux introduced the idea of the thinking body through corporeal mime and articulation was the underpinning of his technique. “If we have no meaning, we have movement for its own sake, which I call dance,” says Stein. “Decroux was very fond of three-dimensional materialization of thought or an idea. Articulation, from the perspective of corporeal mime, is about watching the human body think. And if we spend our time focused on ideas and its three-dimensional manifestation, we have a world that’s worth living. I’m not going to make a negative mold of an idea. I’m going to make the negative mold of a thing. And when we drop the world of things, we actually leave space for a world of ideas,” he strongly believes.

Arguing for pantomime, Taylor asserts that ideas need to be given a form to see if they work or not, while Stein says that pantomime deals with manipulation of things. In Decroux-vian corporeal mime, he argues, one has to use the juxtaposition of shape and movement to create an idea with no acting required.

In the end, both Taylor and Stein agree on going back to the poetics of the form of mime and using it to create something else, like how scales in music is used to create a song, alphabets to make up words. “What makes something poetic is that it’s not simply what it seems to be.  It is more, and the poet is underlining what ‘more’ there might be. This goes back to the authoritarian idea that it does not have a single meaning,” says Stein. “And if I was going to say anything to acting teachers, it’s that giving students a destination is not useful. Giving students direction is useful so that they can take themselves where they need to go rather than where you want them to go.”

Unrehearsed Futures #17: An Actor Prepares for ? with Julie Beauvais and Kamili Feelings What is the function of an artist in society?