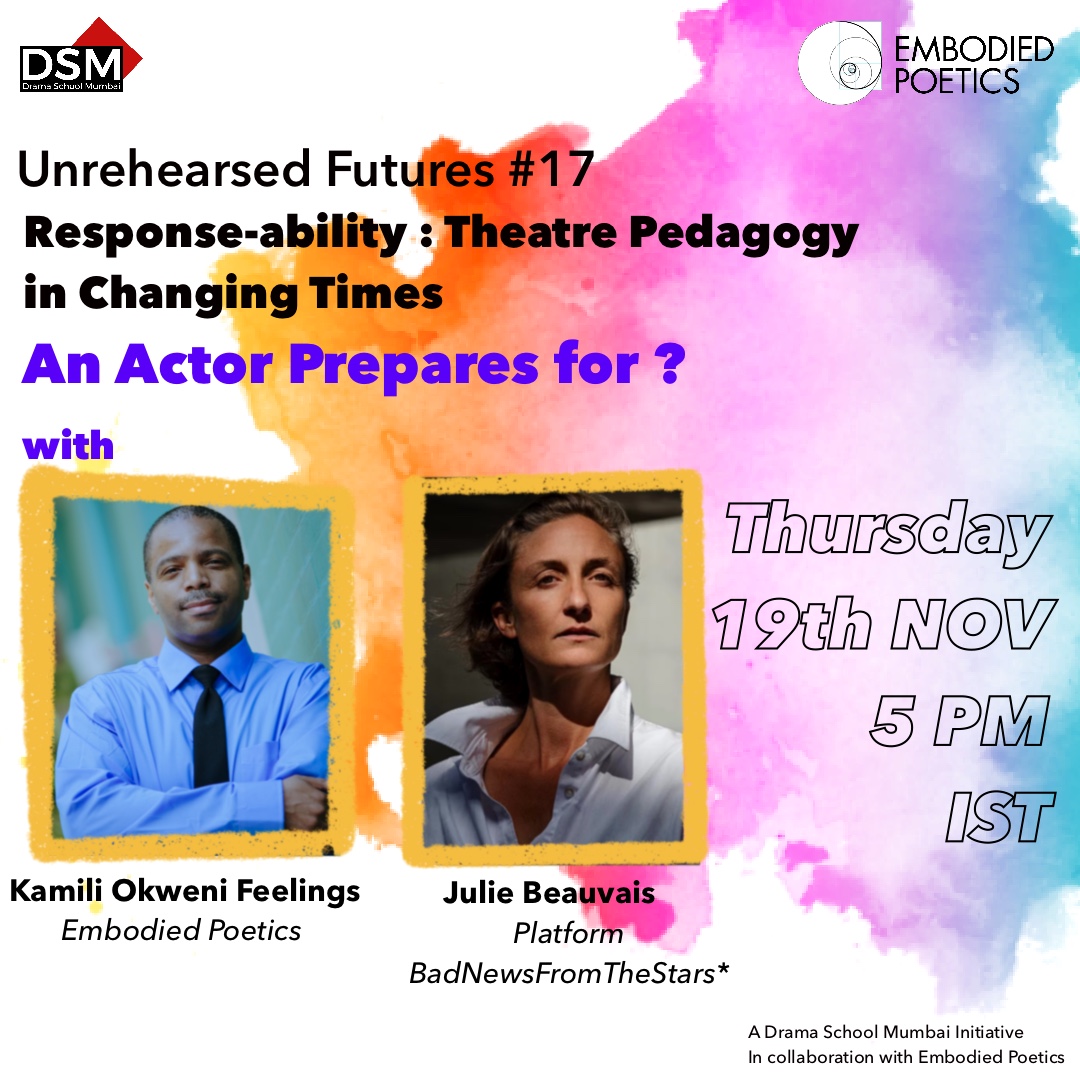 One of the pressing questions the pandemic has thrown up among theatre practitioners and pedagogues is: What is an actor preparing for in the given circumstances? Since COVID-19 enveloped the world earlier this year, education transitioned online with drama schools and universities struggling to adapt traditional theatre learning to a medium that was considered alien to the form until now.

The pandemic has provided a much needed pause for pedagogues to reflect on what should an actor be trained for now. At the recent Unrehearsed Futures webinar, Switzerland-based director and curator Julie Beauvais and American playwright Kamili Okweni Feelings believe there is a need for a trans-disciplinary approach to using theatre as a tool to access imagination and inspire populations.

Both Beauvais and Feelings have been working audaciously at the edge of what is considered to be the “Canon” with new ways of looking at theatre. Beauvais’ art is driven by her interest in embodied experience and elevation. After graduating from École internationale de théâtre Jacques Lecoq in Paris, she went on to explore forms of epic theatre in diverse political contexts. She then directed operas and engaged in monumental installation art in public spaces. With an interest in experimental music and deep listening practices, she also the founded the platform BadNewsFromTheStars*, which is a trans-territorial and trans-disciplinary laboratory for innovative convergences of sonic explorations, scientific research and environmental studies.

Philadelphia-based Feelings is a Brown University alum who studied playwriting under Paula Vogel and the late Aishah Rahman. He went on to work with several theatre groups including the Pig Iron Theatre Company, Pulley and Buttonhole Theater and Beacon Theater. He was also a teaching fellow at the London International School of Performing Arts (LISPA). He talks about the framework and hierarchy within which he learnt how to write plays — where other playwrights spoke in a certain shorthand while constructing the architecture of their play. On the other hand, what he holds more important is the questions he learned from his instructors — specifically around how much does one know about human beings in order to be able to tell the stories that frighten one the most. “You go through traumas as kids, and you don’t put it together into your 20s or 30s and you certainly don’t start working on them until your 40s,” he says, “So I’m still working out how those traumas relate to stories that I’m still trying to articulate. I’m not really writing plays anymore. I’m working on radio dramas and I think that’s probably an easier way to access the mind of an audience.”

Beauvais shares a similar love for theatre of sound. Any drama or acting program around the world places great emphasis on the act of listening. In her artistic practice, Beauvais takes it a step further and uses deep listening practices inspired by American composer Pauline Oliveros, who was a pioneer in electronic music in the 1960s and wrote specific musical and text scores to attune with the world, both inside and out. For Beauvais, she is far from the general association of theatre with a black box. “How can we, in these troubled times discover and listen to the world’s changing messages and pass them along to others in order to facilitate the dialogue between a variety of sentient beings?” she asks, adding that it is the opposite of being in a black box. The idea is to be porous and focus on consciously being and co-creating together.

She is currently creating a 3-year open lab project with groups of researchers-creators based in South America, North America, Africa, India, the Arabic region, Russia, China and Europe exploring new perspectives on trans-territorial cooperation for sustainable development in a context of emerging challenges and shifting paradigms in a more complex and multipolar world.

“It is not about going on sites with the Philharmonic Orchestras and playing for the burnt forests. It’s about approaching people, groups, actions or proposals of minorities or populations that are displaced. It’s about long-term studies and creations in forests, collecting scientific observations on the effect of deforestation on local and global ecosystems. It’s about developing a new – and also ancient – kind of virtuosity, one that grounded in attention and an un-solipsistic relationship to another’s sonic and energetic reality and moving beyond an unquestioningly anthropocentric way of thinking.”

A few years ago, Beauvais stopped using the words “performer” or “actor” in her work, as she felt it limited what she was trying to achieve with conscious movement and deep listening based works. She believes in breaking the binary of being a performer and audience. “We need to look for another vocabulary because if I say we are deeply listening, we are aiming to be, very humbly, in presence. We are now including a lot of vocabulary from permaculture, gender studies, sciences, so that we can eventually get rid of this very narrow idea of performance and actor, and widen it so that we free ourselves from having to do and having to really impose a style or a throw something there,” she expresses.

In his experience too, Feelings found the label of an “actor” limiting the actor-performer. “What I always found kind of lacking even in creation groups sometimes,” he says, “is that we were being put into these positions of being ‘actors’ where we were supposed to be ‘strong’. We were just being very literal about something that’s supposed to affect people out there — meaning your audience specifically. You know, it’s not about you trying to be ‘strong’ so that other people think you’re ‘strong’. It is about somebody being able to recognize something that’s so abstract, that they go, ‘Oh, my God, he’s scared’—and that behavior is so much more interesting than just showing what you’ve personally-observed ‘strength’ to look like. It’s building a ‘story’ from what you automatically offer the public from a more unique vantage point as artists.”

Feelings felt so strongly about the hierarchical pedagogical approach to actor-training that he decided to stop teaching at universities after he finished his training at LISPA. He shares he felt he was doing something false, because he knew students had to get their A’s — and there was no point in being a C-minus student in American society.  Students and teachers, he found, had less time for the nuances of storytelling — the more vital and lasting parts of the instruction for him — within an environment where “better” jobs are non-existent without a college degree of some kind.

“I don’t know what we’re teaching people half the time when we talk about performance, in terms of communicating with the public. And I’m talking about working to communicate with more popular audiences where everybody can understand what happened in the room, even if they are not ‘theater people.’ If we’re not doing that, I think we’re playing a game around how much money we can get from people by teaching them things that we’ve learned. And I couldn’t do that,” shares Feelings. “I think there’s an ethical dimension to learning theater ‘tricks’ that is either ignored or undervalued in society. It might be because the instructional emphasis regarding ‘career choice’ is bent upon fetishizing the individual “performance” — as opposed simply to using “performance” as a makeshift means towards more open communication with an audience. Like the jackleg preacher or even the traffic cop, ‘performance’ might be far more of a public service than we want to admit. But that would mean de-emphasizing ‘authorship,’ and the notion of a ‘settled legacy,’ for each artist. And who wants to be deprived of personal legacies — when artist careers are so precarious already?”

Instead Feelings is choosing to work with medical students as a standardized patient — where he gives students advice on how to communicate more compassionately with patients. “I tell them they could talk to me a little bit better, nicer. I tell them how they can use pausing in order for me to understand that they heard something I said, as opposed to just speaking and getting their agenda done,” he says and adds that such moments between human beings is what inspires one. “That’s what all human beings do. Inspiring one another is what all human beings can do.”

Instead of an actor or performer, Feelings and Beauvais espouse the idea of training to be an “inter-being”, where one develops the ability to tune into being in one’s inter-being-ness but also leaving it open to using it in different ways. Going back to Oliveros’ work, it is like sitting on one’s skin and being able to see the inner and outside world at the same time with presence and openness.

Often, Beauvais works at a stretch of 2-3 months with participants and listeners (not actors/performers) in outdoor and indoor spaces to physically listen inwardly and outwardly. Her approach was met with a lot of backlash from a young group of actors in Berlin, who were hungry to learn specific skills. “They hated me so much, because they wanted skills and technique. They wanted to do ‘theatre’ and suddenly I was there and telling them ‘Nah, just listen’.”

In her experience, Beauvais has found that it is easier to work with or train non-actors in this kind of deep listening work. The problem with the current structure of theatre pedagogy is that an actor stocks up a mountain of skills and techniques through the course of their journey as a student, which they then find it difficult to look beyond, feels Beauvais. While it is true that drama schools increase the capacity to listen, it is important to go beyond these techniques and invent new ones. Actors are in a hurry to do something, to use their knowledge of techniques in response to listening, Beauvais says and adds that that frustration between wanting to do and simply listening is beautiful to watch.

“I realized that it’s much more difficult to work with actors and performers because they are like the dancers entering the room. They have technique ingrained in their body. They are flexible, because they understand a new style and new research very easily. That flexibility is their strength. But they have a lot of techniques and goals that make their process through this kind of work very slow and much more complicated than non-trained people. It’s fascinating, but it’s not easy for them to go there. But it’s much easier for a non-trained person as an actor to develop that,” Beauvais observes.

As people who went through theatre and are now exploring beyond, Feelings and Beauvais agree that it is necessary to constantly break the codes and challenge the binaries that have been set within theatre. They imagine a fluid future where skills and techniques are used as improvisational tactics rather than letting them become a hegemonic structure in themselves.