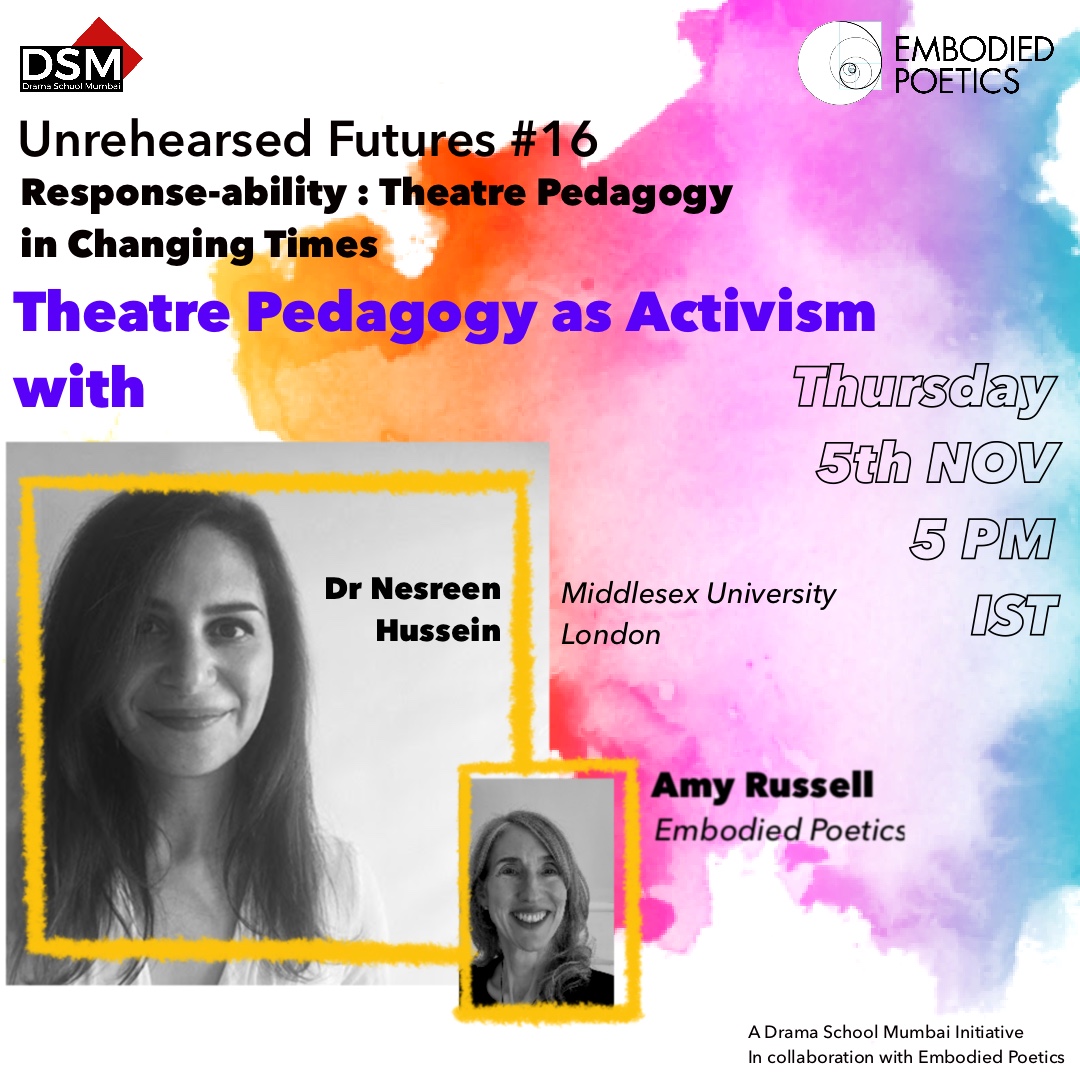 When one thinks of a drama school, one generally envisions a pedagogy that is focused on building individual skills, equipping students with a plethora of techniques and providing a safe space for exploration. It is understood that the teaching imparted will possibly be used for political ends when young theatre-makers go out into the world and create their own work. But is it possible to see theatre pedagogy itself as a form of activism? Dr. Nesreen Hussein, an artist, scholar and lecturer at Middlesex University, London strongly believes so.

Hussein, whose research interests and publications focus on the intersection of performance, politics and activism in relation to issues of identity, agency and belonging, said at a recent Unrehearsed Futures webinar that her ideas of art and activism were deeply shaped by the events of the Egyptian revolution of 2011.

The idea of dislocation, of always existing between a ‘here’ and a ‘there’ has been ingrained in Hussein from a young age. She, originally from Egypt, was born in a different country and returned to her home country to finish her schooling and undergraduate education before moving to London to pursue her artistic and academic career. “And that was a significant part of my existence and the shaping of my identity as I grew up. This sense of liminality shaped my understanding of self and identity in deep and significant ways,” she says, adding this also challenged her sense of belonging for she never fully felt rooted in one place. This also extended into her professional identity as someone whose practice shifts between the artistic and academic.

Hussein identifies as a woman, an artist, academic, Arab, Egyptian and also as a person of colour. She describes that in being in the position of inside and out constantly has turned her into a critical observer of her experiences on an embodied and experiential level. “So, all of these different layers, levels of connection and disconnection also shaped my understanding and my engagement with the notion of activism and how this can be generated or ‘activated’,” she says.

When the revolution began in Egypt in January 2011, demanding the overthrow of former president Hosni Mubarak, Hussein was in the middle of her doctoral studies in London. She says that the revolution emphasized and heightened her engagement with the ideas of belonging, responsibility and agency, for at that moment, something had shifted in her relationship to London and to Cairo, the two main cities she moves between.

Despite the circumstances, Hussein managed to reach Tahrir Square in Cairo, where a lot of the demonstrations were taking place at the time, a day before Mubarak stepped down. Though brief, Hussein managed to have an embodied experience of the early days and months of the revolution, with protesters, of how it affected people’s sense of empowerment and agency, and how various forms of creative practices were used as tools for political activation. “This expression was unprecedented, at least in my lifetime,” she says, “Creative tools like graffiti, verbatim theatre, documentary theatre and chanting, which were not all commonly utilised before that moment partly due to state censorship, were being used for political and artistic engagement. Before the revolution, people didn’t have a meaningful sense of full ownership of public space and how they can intervene in it.

So when socio-political shifts occurred at the start of the revolution, these creative practices were framed in new and progressive ways that I hadn’t experienced before. So, this experience offered me a deep and significant understanding of the relationship between art and activism and how it can manifest and be driven by a growing sense of agency and belonging.”

This was one of the factors that inspired Hussein to push for bridging the gap between art and activism, and pedagogy and activism in her own artistic and academic practices. She believes it is important to emphasize that what happens in other parts of the world is not separate from what happens in one’s local or immediate context. This was emphasized when she began her career as a full time academic in a UK university.

“I’ve tried to challenge a separation in my teaching by bringing the outside in and trying to find the commonalities and shared experiences, and to learn from differences. To acknowledge these differences and invest in them.

There is great value in bringing those elements and experiences from the wider global context into the British university. I think there is a need for that, as well as a need to cultivate a bigger understanding of our relationship with the outside world, and what we can learn from it. It’s a way of activating the classroom itself as well, by looking at models of activism from various global and cultural contexts,” Hussein asserts.

Bringing such discourses into classrooms that are shaped by Eurocentric, colonial pedagogy in a neo-liberal institution comes with its own set of challenges, feels Hussein. When she encountered it in the early stages of her academic career, she noticed that there was a general lack of engagement with politics in the classroom. “There was a general sense of apathy when it came to politics, and there wasn’t much space in the classroom for conversations around how our life experiences are shaped by politics and by what’s happening globally. I’ve tried to bring in those conversations into the classroom,” she shares, adding that there has been often an implicit sense of questioning as to why should theatre students in Britain look at what’s happening politically in Egypt, for example, or India or other parts of the world. “So, conversations around global politics could be marginalized or exoticized in those instances when they aren’t embedded in wider institutional and pedagogical systems that support these kinds of conversations. This has also been one of the factors that contributed to my sense of otherness in predominantly white institutions.”

Despite these challenges, Hussein believes that her position as an outsider looking in allows her a sense of critical distance that gives her a degree of clarity while still being able to remain connected as an insider or as someone who has access into certain communities or contexts. That position offers her the privilege to step back and see how she can participate and use her unique position for intervention and change.

Hussein takes inspiration in that context from Indian scholar and literary theorist Gayatri Chakravorty Spivak’s thoughts on the subaltern. “Spivak talks about margins and the outsides while maintaining a privileged position as an Indian scholar in the American academy, and how she uses that position of privilege to bring the margin into the centre, to bring the outside in,” she says.

Hussein relates to that position as someone whose (‘third world’) country of origin was formerly colonized and lives in the country of the colonizer while having a privileged position in the British academy. She goes on to say it gives her a sense of empowerment and responsibility, and an impulse to consider how best to utilize the power given to her by that position. “I try to maintain an eye on the margin while being in the centre,” she says, “and this gives me motivation to use my position of privilege, as well as liminality, to engage with and foster multiple perspectives and viewpoints. I think there’s something hugely powerful in this.”

Hussein also believes that one has to carve out space for activism within pedagogy and create points of entry where one can bring in marginalized narratives into mainstream discourses. “Part of my understanding of pedagogical activism is to intervene into established or dominant systems of knowledge, even in small ways, even if it’s not received with a lot of enthusiasm or recognition. But there is a need to make space for that. And eventually, over time, this space will grow.” She also points out that it is a collaborative process where one needs to embrace a sense of togetherness and solidarity while navigating this process; one can’t do it alone.

She also addresses the question of how one can work with colonized bodies politically. The body, throughout history, has been a site of oppression. Hussein feels that, though she does not have the power to make her students think politically in how to use their bodies, she can contribute to that process by introducing different paradigms that go beyond Eurocentric or dominant systems of knowledge and training and share various models of practice as alternatives and as opportunities for learning.

Hussein also notes that it can be potentially traumatizing to engage with history, to unpack it, and examine its impacts on the body, especially the colonized body. “But I think the road to freedom lies somewhere along that journey. There lies the possibility for empowerment and liberation and the ability to look back at that history, to look it in the eye and question it, which is very important. For me, this is tied to notions of freedom and liberation,” she says as she signs off.