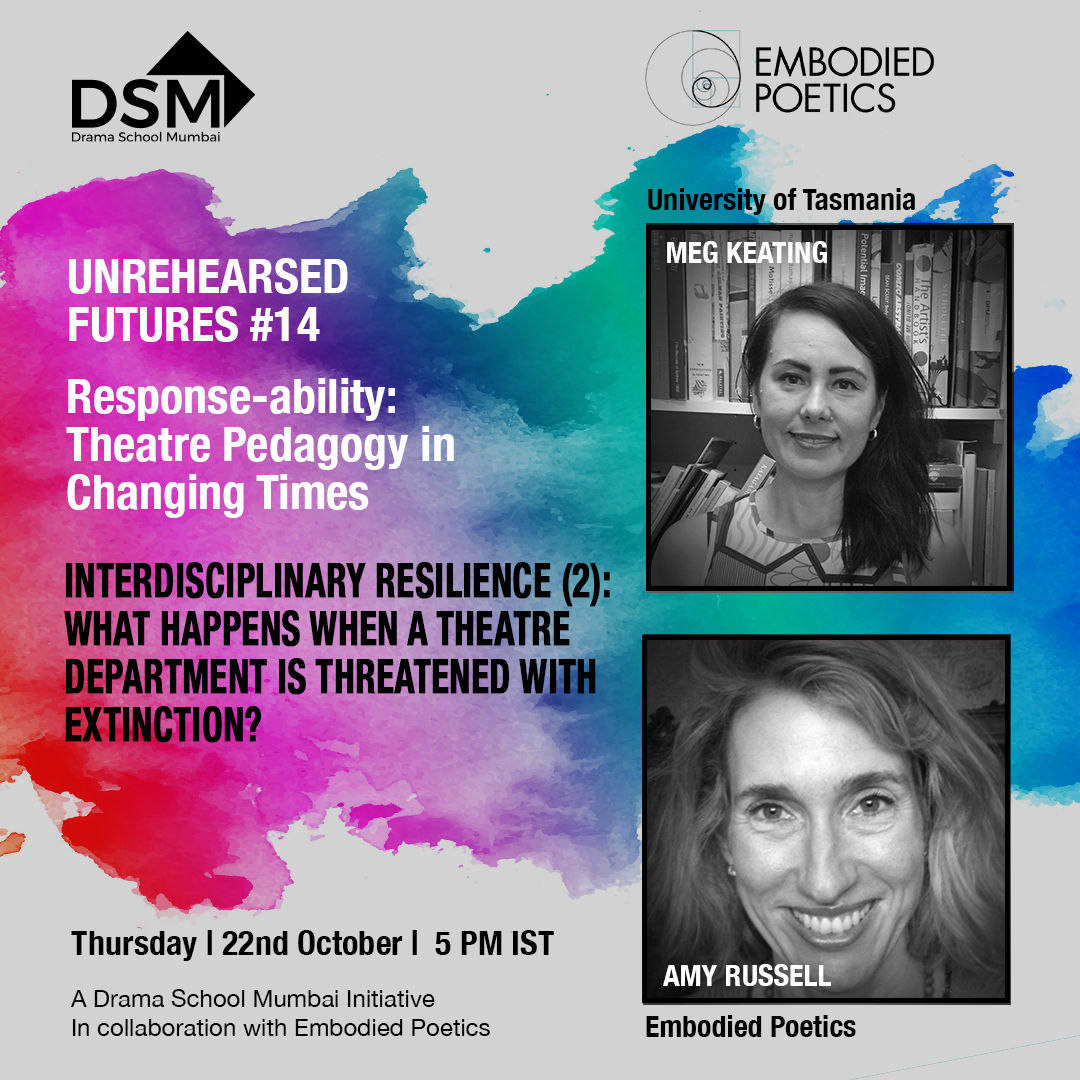 For the longest time, theatre departments within schools and universities have faced the threat of elimination from the curriculum. With the COVID-19 pandemic affecting people and institutions world over, theatre pedagogues again faced the harsh possibility of shutting down their programs when the ability to congregate in physical spaces was taken away. In October this year, Monash University in Melbourne decided to dissolve its theatre department, the Centre for Theatre and Performance.

Theatre practitioners and pedagogues have long debated how to ensure theatre education remains relevant. What is it that theatre does that can be unpacked and understood in an interdisciplinary context? What can theatre do that is special and can be put at the core of other pedagogic processes?

Meg Keating, Head of School of Creative Arts and Media, University of Tasmania, sought an interdisciplinary approach to keep elements of theatre and performance in the curriculum. In 2017, it was deemed by the University that the three-year bachelor degree in theatre and performance was no longer viable. The offerings were reduced to a major i.e. from 24 units, it came down to 8 units within a Bachelor of Arts framework, shared Keating at a recently-held Unrehearsed Futures webinar.

“Obviously, eight units being reduced from 24 was a significant change. And over the three year period, it has been an extremely tough battle to keep that viable,” she says, adding that their last intake of students into the course was in 2017. Keating and her colleagues realized that reducing the program, with lesser offering in terms of learning was not going to make it sustainable. So, this year, they were faced with the question of whether they should completely cancel out the program or do something radical and invest in it.

“We decided to invest,” Keating shares, “And what we did was restructure all of our degrees – Bachelor of Visual Arts, Bachelor of Music, Bachelor of Media and Communication – and build in the centre of those degrees a number of core units, which had theatrical practice at the very, very heart of it and make it compulsory.”

Keating and her colleagues came up with 5 units, called the Creative Curriculum. According to her, the philosophy behind them is to take all their core disciplines, and build a new program that is experimental, interdisciplinary and engages in vibrant learning experiences. At the very heart of it, the program has a number of key elements at the centre of all their degrees: collaboration, co-production, devising and performance.

“What it does is encourage students to take risks, to think big, to look at professional development, and to work through new ways of developing what creative practice and interdisciplinary practice is. We build from foundational skills to more advanced skills as students go through the various programs. And everything is experiential. It’s about engaging and working in project-based and experiential learning.”

Within the Creative Curriculum is a 4-unit block called Creative Lab, which students take up in the second year. Students have the option of exploring one of the following units: Research Lab, Making the Event, Field Trips in Creative Industries, Practices and Cultures, and Industry Placement.

Keating considers the Creative Lab as the linchpin of the whole program where roughly 150 students across disciplines come together under a devising-based workshop. Students are provided with online resources and workshops to build a framework around their learning in the Creative Lab. “It is 11 weeks of taking all students for the very first time and introducing them to interdisciplinary practices with colleagues and students from a range of different disciplines. It is something that is completely new to all of them. So it is about experimenting and risk taking,” she shares, adding that in order to take the pressure off students, it is a non-graded subject where the emphasis is on going through a process rather than getting a result.

“We understand that such a new learning experience may not always end in a very clear result, but it’s about the journey of getting there and learning all of those things along the way,” she believes.

Over the course of the semester, students devise new work that builds upon their own creative practice. In the first few weeks, they are introduced to a range of performance-based works and each one is tailored to a different discipline. It looks at different ways of engaging with performance through music, visual art, film etc. Some works shown to students include Christian Barclay’s Guitar Drag, Isaac Julien’s Lessons of the Hour, Group Show’s The Theatre Is Lying, Hito Steyerl’s How Not To Be Seen and Soda Jerk vs The Avalanches’ The Was. With these case studies, Keating takes her students through a number of workshops, where they are introduced to key skills in each one of them.

“We start building devising and ensemble groups through this,” she says, “One of the key skills here is teaching students for the first time to collaborate. How do you actually communicate across disciplines? How do you actually co-devise, and what is it like to work within an ensemble? So we’re starting to build some crucial soft skills.”

For those in the third-year, students engage in a Research Lab where they work with an industry partner, be it a museum, shoemaker or art festivals in Tasmania. Students respond to a brief from an external partner in a classroom context that mimics an incubator hub. The focus is on collaboratively translating real world issues and problems into interdisciplinary creative outputs or concepts. The external partner joins the class to give them the brief, hear milestone updates and to see their final work, where students pitch to the partner.

In the third unit, students can do Making The Event, where students across disciplines get the opportunity to work together to create a one-off immersive experience/event for one night only. Students and external partners devise a work for a particular festival. “The results of this are usually quite chaotic,” says Keating, “The students’ learning curve is incredibly steep. But it’s also a lot of fun, because it’s really high energy, a lot of adrenaline, and students are working really hard for an audience turning up in the vicinity of 6000-7000 people for that event.”

The remaining two units, Industry Focus and Field Trips include students working closely with an industry partner closely for a brief period of time and going into the field, across the country or internationally, to see what is out there in the creative industries.

As radical as the whole program sounds, not everyone was up for it in the beginning. Keating says she was lucky that the senior management was on their side and willing to try out something new. “Not everyone thinks that it’s a great idea. You can imagine, we have a traditional Conservatorium and a lot of our classical performance students will struggle exponentially within this,” she says, adding that she accepts not everyone would be interested in an interdisciplinary practice.

“There was a lot of shouting and a lot of back and forth,” Keating elucidates, “It wasn’t easy. I’ve shown you things we gained, but there is a lot we lost out on too. We lost a number of studios within the visual arts program. There was a real trade off and when there’s a trade off, not everyone’s happy with that outcome.”

Often, it involves a student’s identity as well. Some identify as a photographer or a dramaturg or filmmaker. “We don’t always get that right. I think it has to be a constant sense of refining where sometimes you put things on the chopping block, and you say, ‘Actually, I think we’ve gone a bit too far there’, ‘Actually, we need to rebuild some of those things back in into the curriculum somewhere’,” she explains.

However, with a little bit of luck and lots of late nights arguing, Keating and her colleagues were able to strike a balance to create a framework where there was freedom to experiment and work with different people/organizations each year.

The pandemic has forced the theatre community to innovate and it is often the resistance to say yes to propositions in front of one that prevents one from exploring a new path, a new relationship with the art form and its pedagogy. In all this, Keating’s measure of success from this new program is to see her students be employable, not have “regular jobs”, and move from industry to industry where they’re still creating and devising and having fulfilling creative careers.