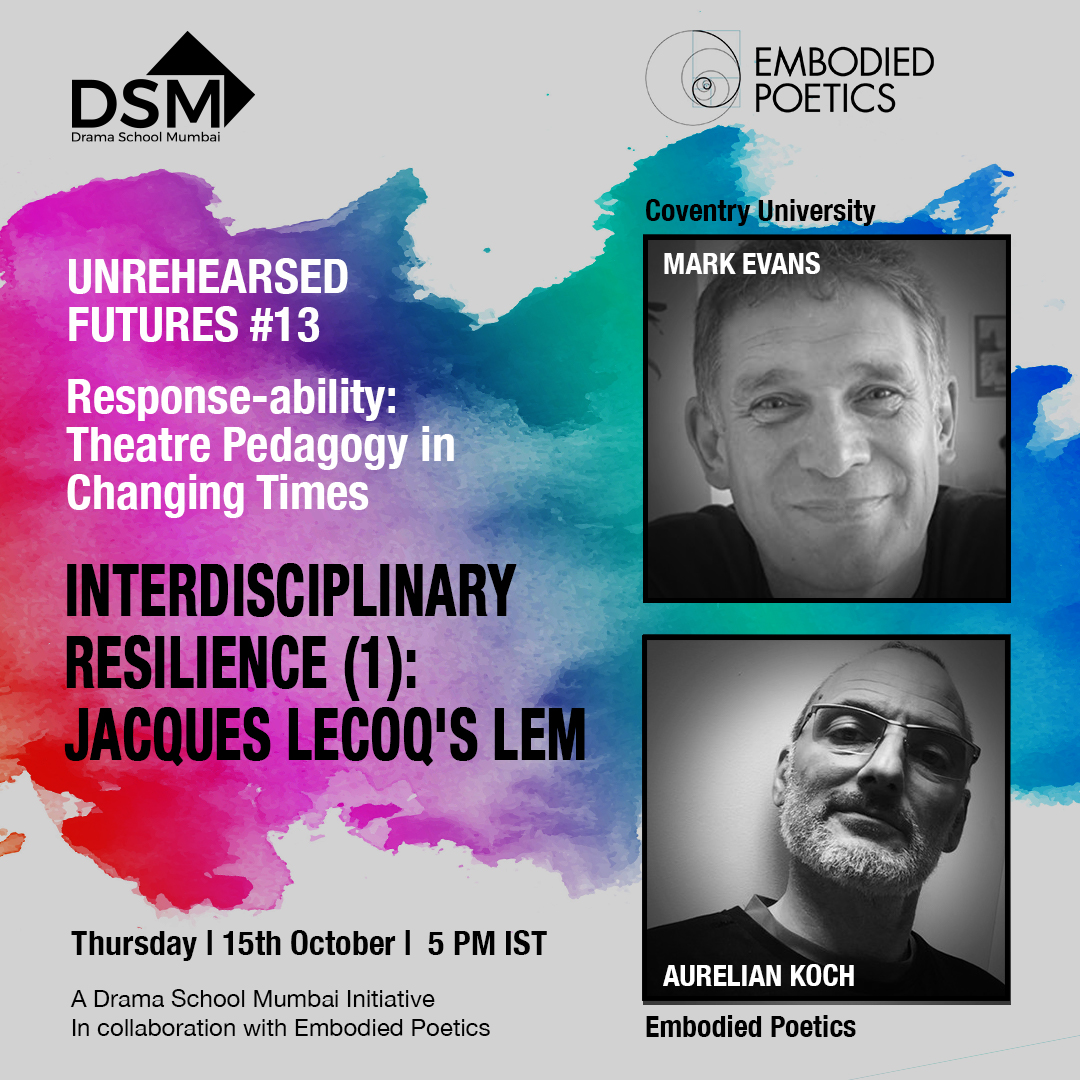 The human brain is adept at finding patterns where none exist. The brain rushes to assign meaning to things it sees and perceives in its surroundings. Doing this helps offer one a sense of self-control. When the pandemic hit, theatre practitioners and pedagogues rushed to understand what it meant for the art form. Was performing online actually theatre? Should theatre pedagogy include teaching students media skills? Will there be a return to physical performing spaces? What does the pandemic mean for the future of theatre?

One of the questions the pandemic raised is the importance of an interdisciplinary approach to theatre and using theatre to expand other seemingly unrelated forms, such as architecture or sports, for example.

This isn’t the first time pedagogues are looking at interdisciplinary resilience in theatre. In 1977, Jacques Lecoq, founder of the École Internationale de Théâtre Jacques Lecoq in Paris, founded a stage design department, known as the LEM (Laboratoire d’Étude du Mouvement — Laboratory of Movement Study) in collaboration with Lebanese architect Krikor Belekian. Here, Lecoq developed a teaching program on architecture, which is based on the human body, movement, and the “dynamics of mime”. It became a space for experimental scenography, exclusively dedicated to the dynamic research of space and rhythm through a structural form.

According to Mark Evans, a researcher who trained originally at the Lecoq school in the 1980s and went on to study with Philippe Gaulier and Monika Pagneux, it is only during the last 30-40 years that embodiment has become key to developments in theatre and pedagogy. Describing his experience of the LEM at a recent Unrehearsed Futures webinar, he says, “I didn’t actually study the LEM. I was peeking through the door. I was the person looking down the corridor full of what appeared to be just a ramshackle corridor, full of bits of wood and paper and cardboard and string and all these wonderful things.

But it was clear, even way back then in the 80s, that it was something Lecoq was very, very committed to. And there was a strong sense that this was a foundational part of his personal research. The interesting thing about the LEM is that it looks far beyond just the actor and the performer in theatre. It looks at space, shape, motion, and all of these concepts, not in a conceptual way but in a way, in which you’re engaged in doing, making and moving these things.”

What makes the LEM interdisciplinary is the way it was conceived. Lecoq came from movement-based training while Belekian came from constructive, architectural training. “So, the fact that it was born out of the meeting of these two minds, and they developed the approach together, immediately makes it utterly interdisciplinary,” says Aurelian Koch, who studied the LEM under Lecoq for two years. “The LEM, therefore, can never be either theater or architecture or anything else. It always falls between things. And that is, I think, where its strength lies,” he adds.

Koch was the co-founder and joint artistic director of Bouge-de-là Theatre in Oxford for 12 years. He works with architects, graphic designers and uses the LEM approach to relate movement and architecture. He shared an incident where he was working with a group of architects in the room and asked them to move long sticks in the space. It was strange enough to go into the architects’ practice with bits of cardboard paper and hot glue guns but here they were, asked to move in space with sticks, says Koch. Their first instinct was to assign meaning to what they were doing with the stick i.e. play it like a guitar or hold it like a gun. “We don’t feel comfortable to give all the focus to a stick. And the nice thing about this is, you tell them, ‘This is not about you as a performer. What we’re doing now is purely about this stick in the space’,” shares Koch.

There were a bunch of architects wielding their sticks and a lot more watching what was going on. And then, there was a moment where one architect made a connection with his stick, says Koch. “And he just started realizing that actually, if he focuses, and if he just gently moves that stick, it really starts affecting the space. It was also interesting, because he realized it’s not just the stick he was moving, but actually there’s a whole line that extends in the space. And it all became about that moment and there was this calm that descended in the room,” he shares, adding that the power of the LEM lies in its simplicity, in allowing oneself to surrender to the process, to the space.

Koch believes that the LEM allows a performer to physically relate to the space they inhabit, develop a kinesthetic response and look at their physicality in relationship with others. “If I move one stick in space, it’s interesting. The moment you bring a second stick into it, the whole thing changes and it isn’t about the one stick anymore. It becomes about the relationship of the two sticks together. And what you start looking at now is less the individual sticks, but more the space in between them,” says Koch.

The LEM doesn’t teach anything new. It makes participants more aware and instigates to refine something that is actually inherently in them. “And architects, particularly, are really bogged down when they do work on computers with design programs and draw lines. It gives them the freedom to step back and to actually play with the space and take a breath, get away from two-dimensionality,” shares Koch.

Both Evans and Koch agree that the LEM is not an intellectual approach. One can’t read about it to know more, one has to do it in order to understand it. LEM helps the participants heighten their awareness and defer meaning-making, allowing unexpected meanings to emerge as the work progresses.

Koch feels that younger people in the present generation are very adept at making immediate decisions due to the extensive presence of social media in their lives, which encourages reactions that are instant, “like”, “don’t like” or “yes” or “no”. He gives the example of how brand logos have meaning attached to them. If one sees a black tick or swoosh, the brain instantly tells one to associate that image to the sportswear company Nike.

“And I think the other thing that it speaks to, is notions of creativity,” remarks Evans. “That part of trying to be creative is not coming up with your own ideas. It’s waiting for the ideas to arise, to come forward out of the things that you’re working with. And it’s really important there to push back the urge to straightaway find a meaning and find something that is meaningful for you in the thing that you’ll do.”

The central part of Lecoq’s teaching in the LEM is about tackling movement from numerous corners. It is about finding movement through making charcoal drawings, cardboard constructions and more importantly giving oneself time to move and experience. “That’s the beauty of it. It’s a bit like having a lump of clay, and really putting force into it and finding a form in it a rhythm, creating something. By doing that, you take another step towards something much more fundamental and much deeper but you have to give yourself the time to do it,” believes Koch. “And the LEM allows you to take that time and get away from that superficial level of giving meaning to things, rather than understanding them. It is a physical response, even on a piece of paper. And that’s where its strength is.”

As young students and theatre practitioners, it is tempting to view pedagogy as an end, to find instances of its direct application in our work. Koch shares that when he and his friends founded his theatre company Bouge-de-là, they constantly kept asking themselves if they were actually using the LEM in their work. What they realized, as they created more and more work, is that the LEM can never be the end, that it is not a separate component. “The LEM has to always be connected to something else. In our case, it was creating theater. But what the LEM did really well was that it was always in the back of our minds, always hovering there. And at the right time, when we created things, it would just come in and give us a solution,” he says.

If there is one thing that is helping the world get through this pandemic, it is the use of technology for teaching, entertainment etc. Theatre teaching has shifted online at this time. But the pandemic has also provided a much-needed pause for theatre practitioners to reflect on how the online space can act as a catalyst for creative transcendence.

Both Evans and Koch agree that technology is here to stay and that it will only develop more as time passes by. “So there are potentially ways in which, through augmented reality for instance, we could start to do some of these things. But at the moment, a lot of that technology is not developed and not available in the ways that would make it happen. It would need to be far more pervasive, cheaper, and a lot easier to use than it currently is,” feels Evans.

Lecoq’s relationship with theatre was interdisciplinary to begin with. In fact, he was a trained physical education teacher before he got into theatre. Looking to the future, both Koch and Evans believe an approach to learning and making like the LEM could be used far more for the future development of theatre pedagogy and pedagogy in a wider sense, as it looks at ways of bringing together different disciplines, nominally within the context of theatre training, but with potential to expand way beyond that.