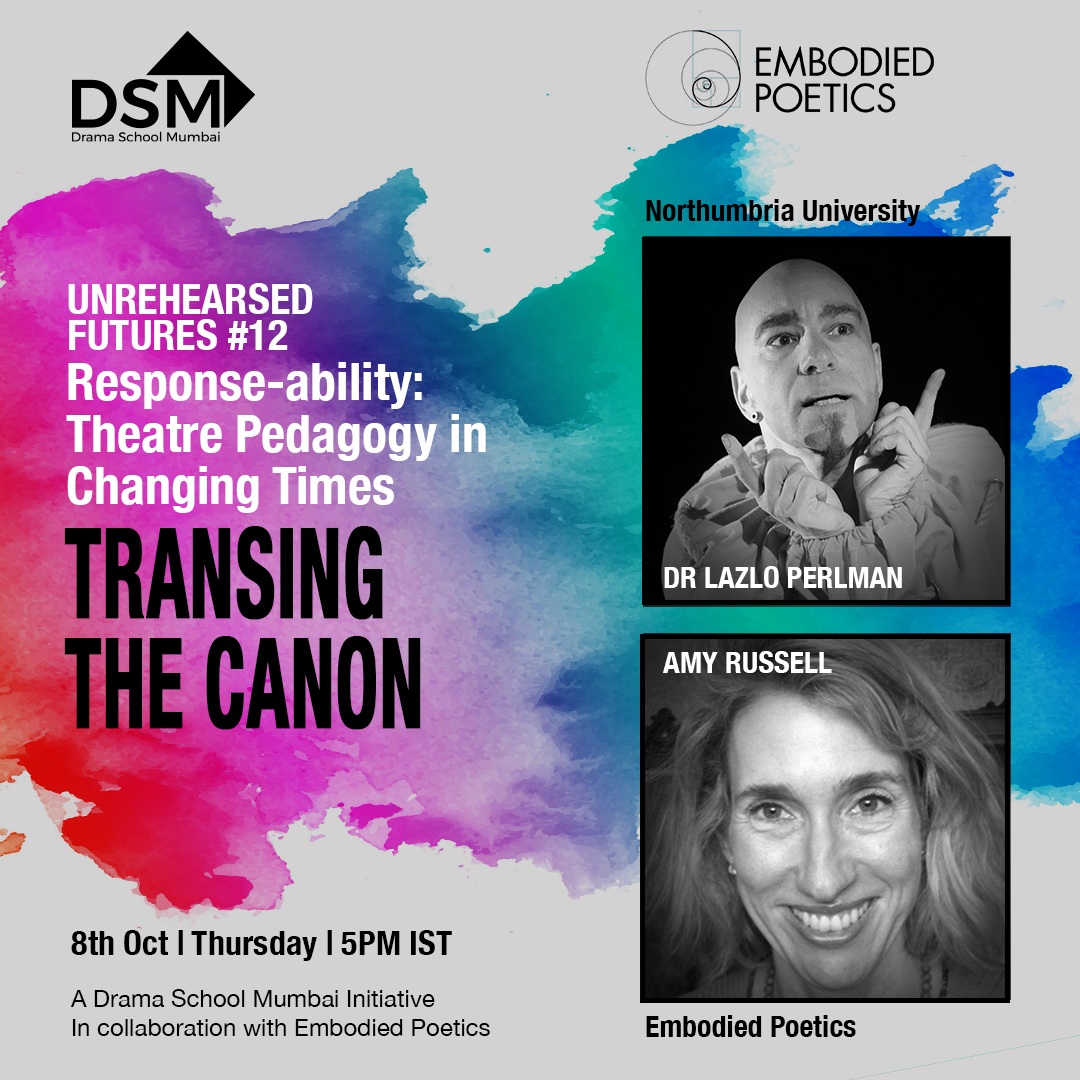 When the year 2020 began, one did not foresee the period of upheaval and disruption that would follow due to the COVID-19 pandemic. Upheaval not just in terms of socio-economic and political losses but on a personal level, forcing professionals in different fields to take a long hard look and change something about existing systems and structures in place, including theatre. As the world moves towards the end of an unbelievable year, it is perhaps safe to say the year has been one of transitioning from what had been labelled as the norm to establishing a new norm.

Within theatre and its pedagogy, Lazlo Pearlman believes that the pandemic has provided the community with the opportunity to, what he describes as, “trans the Canon”. A creator, performer and teacher at Northumbria University, Newcastle, England, Pearlman’s work is inspired by his queer Jewish and transgender identities. Speaking at a recent Unrehearsed Futures webinar, he said the idea of
trans-ing comes from transgender scholars like Susan Stryker and it is thinking about trans-ing as a verb i.e. the idea of moving across or beyond the gender one is assigned at birth while keeping it in their rear-view mirror.

“So for me that act of trans-ing is one of the powerful things about having a transgender experience,” he says, “The experience of having moved away from the gender I was assigned at birth, but not actually towards anything.”

Similarly, Pearlman looks at being queer as a verb, an action. “Queering”, according to him, is then twisting and subverting the normative and the hegemonic which has a sexuality that’s rear-view mirrored. Applying this to his work, Pearlman seeks to move away from the Western canons of theatre pedagogy, be it Lecoq, Stanislavski or other training and performance origins that were thrust upon as Canons of learning. In an interview titled Against the “Lecoq canon”1 and published in Theatre, Dance and Performance Training journal in September 2020, he says that his encounter with the “Lecoq canon” at LISPA (London International School of Performing Arts) seemed to follow a strict pedagogical protocol that was already established “in order to get to certain results in a certain order.”

“My originality was completely squashed by the pedagogy. I only remember getting negatives. The people who were doing well simply used the tools well. It didn’t seem original to me. As a teacher now, I understand that you can use a pedagogy like musical scales. You may eventually find your originality, but that doesn’t happen while you’re learning to use the tool,” he said in the interview.

For Pearlman, trans-ing theatre pedagogy should be a continuous journey because the minute one settles down on one way of teaching or learning, it is established as another tradition with a fixed set of rules and regulations. “Trans-ing for me is no longer trans when it stops moving away from something. It is almost like the polarities of magnets. There is always movement. There’s a point at which the moving toward has to become a moving away from again, because otherwise, you end up in another norm,” he explains.

If you want to kiss her, just kiss her!

Unpicking further on the need to trans theatre pedagogy, Pearlman shares an anecdote about an intensive Meisner training workshop he attended. Sanford Meisner was an American actor and trainer well-known for developing the Meisner technique, which focuses on “being in the moment” and the reality of doing, forcing actors to listen to each other and cutting away intellectual shop talk. One of the foundational exercises within this technique is the repetition exercise where partners sit across from each other on a chair and make an observation such as “You are wearing a blue sweater.” The partner repeats the phrase exactly as they have heard it. This repetition goes on till a deeper connection and emotional dialogue is established between the two actors. Meisner’s aim was to “teach actors to respond spontaneously to outside stimuli, to act on impulse.” The role of the instructor here is to hold the space and allow for “freedom”, espousing Meisner’s mantra of “fuck polite”.

In the workshop Pearlman attended, the trainer was watching a young man and young woman doing the exercise who were clearly in a lot of distress and were stuck. The trainer asked the man what he wanted to do, as a way to gently nudge him to follow his instinct. He replied, “I want to get closer.” The trainer again asked, “No, but what do you want to do? Do you want to kiss her? Then kiss her.”

“And in that immediate moment,” Pearlman shares, “for me, the hegemonic heteronormative norms came crashing down on both of them, and you could see it on them. The only thing that he was able to do with them from that moment on was head in for the kiss. All other possibilities within the Meisnerian repetition were removed.”

For him, the instructor pushed the two individuals into a performative reification of heteronormative gender roles. Pearlman further breaks this down in a paper If you want to kiss her, kiss her! Gender and queer time in modern Meisner training2, co-written with Dierdre McLaughlin.

He also believes that theatre instructors and pedagogues have to unpick what they see when there are two people doing any exercise. If one sees, like the above trainer did, two people who will or must kiss, it is imperative that the instructor stops themselves from laying this structure on them, shutting down other relational possibilities. “We have to unpick ourselves and we have to allow space. Maybe we have to allow more chaos, maybe we have to allow less recognition inside of these things in order to let them open up and do something else,” he believes.

The biggest problem with the Canon, for Pearlman, is that Meisner thought his “fuck polite” mantra meant anything was possible but what he really meant was to “fuck polite” society inside the strictures he already knew of what gender, sexuality and behavior was supposed to be. “So it’s almost as though what he wrote and how he was able to apply it, were two different things, mediated by his culture, and his background etc. So it seems to me that the Canon might have useful things in it. But it is loaded with all kinds of normative requirements of all kinds of bodies, all kinds of genders and sexualities, and ethnicities, backgrounds, ages, sizes and everything else,” feels Pearlman.

Pearlman believes the present COVID-19 pandemic has provided theatre pedagogues the opportunity to challenge traditions and trans the Canon. “Everything is thrown up in the air now. Our norms have been shattered. There’s a space for us as theatre makers, because our ideas of what theatre can be have been completely crushed. So it’s a perfect time to be rethinking things quite deeply. We have to rethink everything in order to teach and what to teach in these times,” he says.

This moment in time requires a creative resistance within theatre pedagogy which can be seen as being resistance fighters or resistant to change. For Pearlman, trans-ing is an act of resistance in itself which requires one to push away from something. He emphasizes on the need to do it at a personal level first. Speaking of resistance of change in pedagogy, Pearlman feels it is sometimes too simplistic: include other people in the Canon, changing of pronouns or adding wider variety of authors in the Canon.

“In my mind, what that does is, it simply tries to make more room in a messed up norm for more people rather than destroy the norms themselves. And I think that is a great first place to start but, when we stop there, when we say that’s it job done, we actually resist looking more deeply into the the structures themselves. And again, it’s a place where we have to look in ourselves first,” he strongly believes.

“We blow things up, but if all we do are looking for inclusion inside, we just reify and recreate the same structures just with more people inside them. And that doesn’t change any of the actual problems. I think there’s a resistance to change because it’s hard to really look at those structures and figure out what we do with them. It is hard to think outside the binaries,” Pearlman says, insisting that theatre makers and pedagogues must resist the impulse to simply make a bigger normative table.

He believes it is important to remember one is here, in pedagogy, “for now”. A particular process works “for now” and it is crucial to ensure one does not hold on to the product for too long, and rather look for trans-ing in the process of reaching a finished product. And then remember to move forward, to “be”, instead of seeking to “become”.

As we navigate these tumultuous times, it important to “be” now, says Pearlman, The present moment calls for us to transition, “be” fluid in all aspects, navigating with presence and grace as we move ahead to train theatre-makers of the future.