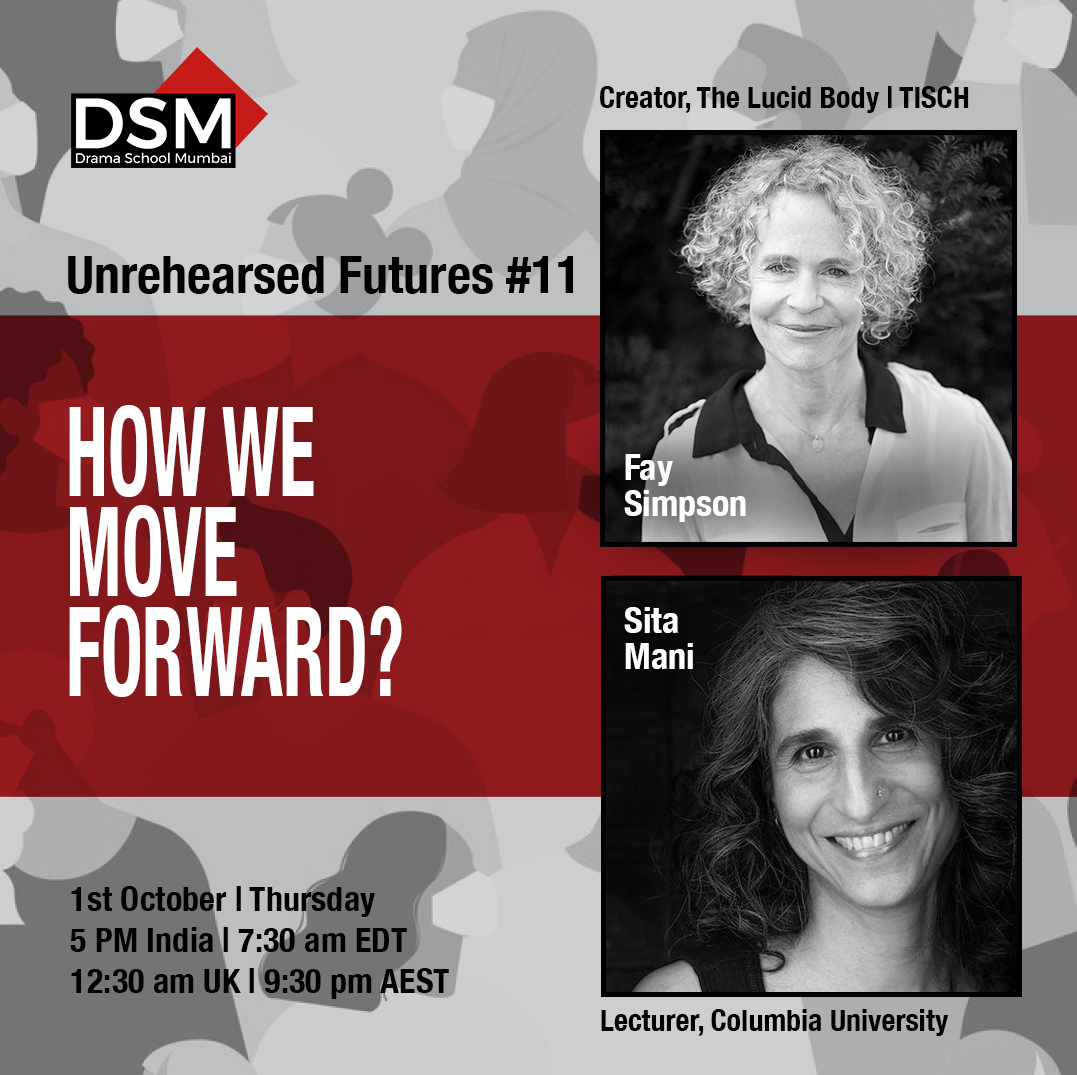 When the COVID-19 pandemic forced people into their homes for months on end, people began working, learning and doing everything from home. What was, at first, considered a stop-gap measure soon turned into the norm and now, it seems to be so for the foreseeable future. Teaching theatre through Zoom windows and squinting in the blue light to make sure one is able to give equal attention to all students, it was a task theatre pedagogues were not prepared or equipped for. Being ripped away from a shared physical space, teachers took some time to find their grounding in the virtual space.

But, for Fay Simpson, associate arts professor and movement teacher at New York University (NYU) Tisch School of Arts’ graduate acting program, who has coached actors from around the world over video conferencing platforms, teaching online was not wading into unchartered waters.

“So, I had a bit of prep before the pandemic hit,” she said during a recent Unrehearsed Futures webinar.

Simpson is best known as the founder of the lucid body technique, a physical process for actors based on the exploration of the seven chakra energy centres. It is equal parts actor-training and understanding the self. She uses the chakra centres as diagnostic tools where she uses Jungian psychology to unlock the self. This involves diagnosing the physical and emotional habits the body holds and breaking them down in a psychophysical manner to enable an actor to play any character.

When the pandemic hit, NYU shifted its teaching online in the blink of an eye. “And I would say in terms of the learning curve, it took me about a month to figure out how do I get what used to be extremely intimate personal journeys with each and so it goes quite deeply into places that they need support,” she says.

Simpson’s work with actors requires a hands-on approach, being in the same physical space where she can sense their energetic bodies and assess how far they can go. But she is much more careful about pushing her students online. To help them find their grounding, she asks students to feel their palms on the wall to help re-regulate their nervous system.

“I’m just so much more careful. I mean, frankly, if someone really has a hard time with rage, I don’t even have them hit a place where they feel out of control,” says Simpson. And given the nature of the medium, where everyone is working in their individual spaces, she found there is less judgment towards others. “They’re listening to their bodies in a different way. I feel they are actually improving, because everyone is muted. And nobody can hear them. I find that there is less judgment towards each other because they are so focused on themselves and working with the one other person they pin on their screens,” she shares.

Simpson also does intimacy work as part of her teaching, specifically how to use consent and choreograph intimate scenes. The first impediment was to figure out how this could translated into an online space, and still carry the learnings that being in the same physical space could have offered. What transpired is that students began voicing out asking for consent. For example, two scene partners would pin each other and one would ask, “I’m putting my hands around your waist, is that okay?” and the other would respond, “Actually no, that doesn’t feel right. I don’t know why but you can put them around my shoulders,” and so on.

In this, actors were forced to imagine being touched and observing how their bodies reacted to such touch. This way of asking for consent became almost a part of the script.

“And I found that the feedback I got from the students was that they could actually find where they were sensitive. Because so many times in face to face, young people just want to be good actors and say yes to everything. And they actually don’t take the time to recognize they do have some physical sensitivities and issues. Being in a space by themselves, they actually had the time to feel,” she shares, adding that she found shy and reserved students came forward more in this virtual space and the scenes ended up being quite intimate.

The success of doing intimacy work online was a surprise to Simpson and that is when she began warming up to the physical space.

However, there has been a lot of debate about what are drama schools and theatre pedagogues training students for in a world where the ability to perform and be in the same physical space has been taken away. Simpson is the kind of person who believes in making the best of the situation.

“The training continues. We’ll be back in the theatre in a year or two. If you look back into history, the plague did last for a few years, and then it did end. So to me, I feel like how can we continue training and not have a whole generation of untrained people? I am training people to get back in the theatre. It just so happens that they’ll probably be great film actors by the time we’re through with them.”

But she also worries if actors trained on Zoom will be able to reach vocally to audiences on stage, when we come out of the pandemic. She recalls watching some great film actors fall flat on stage because their physical and vocal choices are so small that the person sitting in the back row can hardly notice anything. With Zoom, it is easier to fall back on naturalistic acting and making small choices. And there’s no real choices being made about the given circumstances and about the character, feels Simpson.

Recently, Simpson also had the opportunity to teach live and virtual classes at NYU. And she found a marked difference between the students’ physical and virtual energies. “When I met them live, I didn’t recognize them. Not just because they were wearing masks, but because their energetic body was different than their virtual body. And it was like, whoa, so much more information. Then when I go back on the virtual, I feel like I have loads of physical knowledge that leave me more informed as I coach them online,” she says.

Training in a time of multiple traumas

The pandemic is not the only disruption in the students’ lives. In the US, Black Lives Matter, the differences in socio-economic statuses, the California fires are all multiple disruptions that is affecting how students turn up for class. Simpson acknowledges it and asks her students to “call her in” (as opposed to “call her out”) and correct her if she says anything wrong or discomfiting. Students are going through multiple traumas, and Simpson feels it is not possible to leave it all at the door, especially in the kind of psychophysical work she does.

She recounts an incident where she was coaching an actor whose character had an underlying layer of loneliness and grief. Simpson wanted the actor to feel loneliness instead of indicating it. The actor, who lived alone, dropped to the ground and broke down. In such situations, pedagogues often come close to the trauma a person is feeling, especially on Zoom, and the lines cross over into therapeutic practices sometimes. This then brings up the question of if the teacher is teaching or being a therapist.

“I know this has been a point of discord but I think theatre, by its very nature, is therapeutic,” believes Simpson, “I mean, you can’t ask an actor to go to all of these very extreme places, and then walk out of the room like, ‘oh, yeah, I just killed someone.’ I wouldn’t worry about that. I think you have to trust your instinct to say this person is falling apart a little bit, let me see how I can get them back on track so that they can get back to their work.”

She recalls another incident where she was teaching a class about creating their own work, and as part of an exercise she had them close their eyes, imagine things in order to open up them. In that, she told them to imagine being chased down and that they’re running. There were three African Americans in the class who stayed back to talk to her after the class. They were angry and upset and Simpson had to have them put their hands on the wall to calm down. The instruction acted as a trigger for them, given what is happening in the US right now. “As African Americans, they are chased down the streets and shot at. I obviously felt terrible about it, and realized I was not being mindful. I apologized for my insensitivity,“ she says, adding it is an absolutely scary moment when something the instructor says on Zoom triggers trauma within the actors because the teacher isn’t in the same room as them to help them re-regulate in a more effective manner.

Simpson also feels that people need to understand and make room for the traumatic history African Americans have had.

“Ancestral history needs to be honoured. If there’s a trigger, it’s my responsibility not to trigger them. For centuries, white teachers have expected people of colour to walk into a white room and play by white rules, and have white people say things that are not sensitive to the fact that they’ve been from slavery or they’ve been put down, they’ve been cut out. They’ve had so many disadvantages. I feel actor training is unpacking the personal history and the ancestral history of each.”

Most importantly, Simpson also feels that given the isolated world one is living in right now, where structures are falling apart, it is important to establish a community of care of sorts, to acknowledge what is happening and move forward with the work, instead of ignoring the elephants in the room.