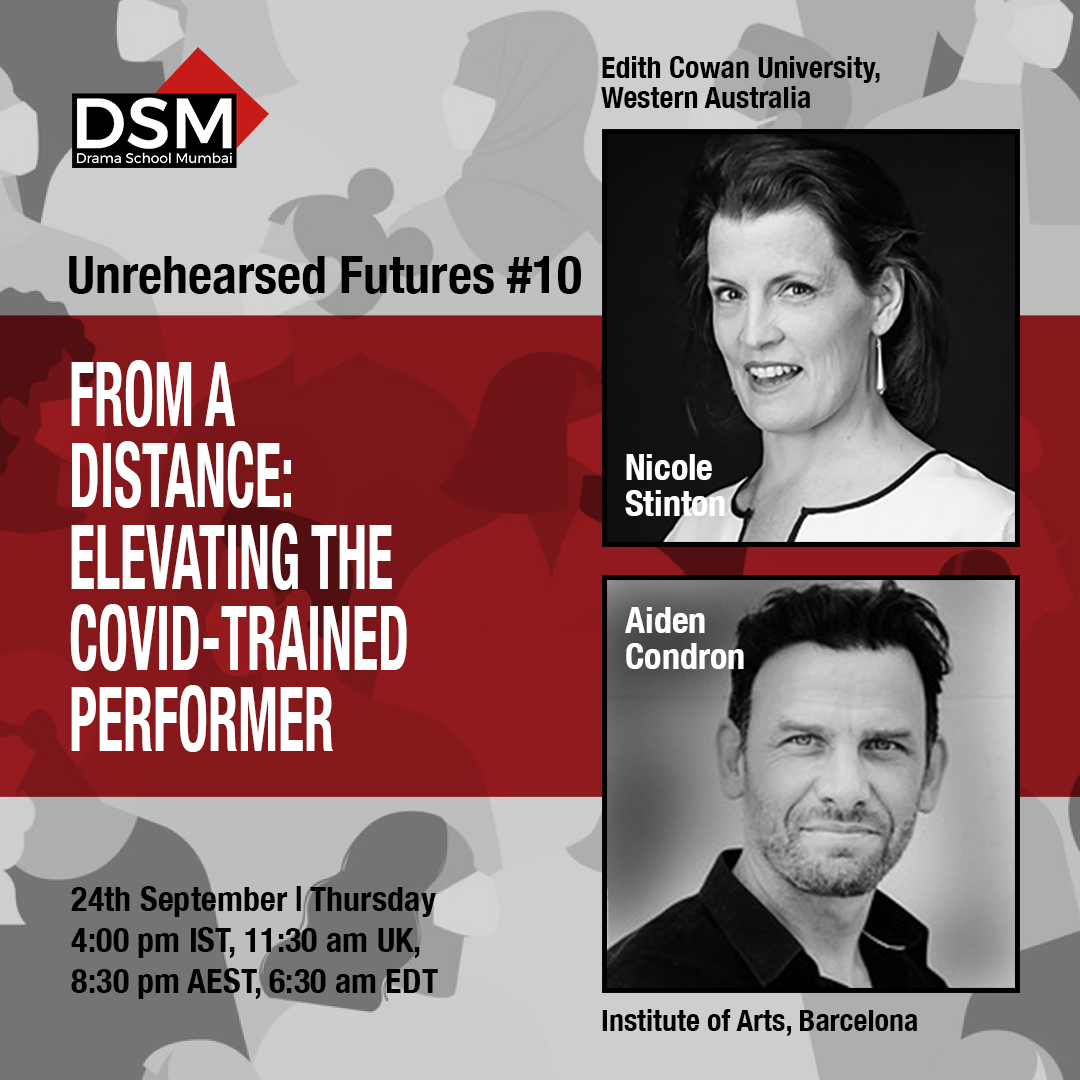 Over the last couple of months, there has been much talk and discussion about what is going to be the future of theatre given the adverse effect of the COVID-19 pandemic around the world. In the beginning, there was a swift movement towards online teaching and performance, and as time passed by the theatre practitioners began looking at ways in which they can engage with the new medium. Thus followed a slew of online performances, short films based on plays, improve comedy etc.

Theatre pedagogues around the world have been struggling with how to deliver learning online that was specifically designed for a physical space. Most drama schools shifted their courses online as soon as the lockdown kicked in and figured their way out through trial and error as they went along. There were discoveries along the way.

For Nicole Stinton, course coordinator for musical theatre diploma at the Western Australia Academy of Performing Arts (WAAPA), the experience brought forth such unique surprises that she has decided to retain some of the online practices in the curriculum moving forward.

The move to teaching online was a sudden one. Stinton and her students were face-to-face on a Monday and 100 percent online next day. “The online performances we did were in no way to replace face-to-face theatre training. We were swift and responsive. We saw it as a stop gap measure. We didn’t get it right in the beginning, and we didn’t get it right in the end. But we probably got it more right after three and a half months of being online,” she shared at a recent Unrehearsed Futures webinar.

Since the pandemic took over, there has been discussion about what theatre pedagogues are training the students for. The kind of training students are going through now is unique and is perhaps a once-in-a-lifetime event which leads one to wonder if drama schools are bringing out a new breed of performers: the COVID-trained performer.

Stinton found that some skill developments were hindered being online and acknowledges that there is a limit to the type of theatre one can create in this space. “But even so, I believe that there are many things to celebrate and elevate about the COVID-trained performer.”

While she hopes that there will come a time when one wouldn’t have to worry about COVID –related safety and teaching can happen unhindered, Stinton believes there have been valuable benefits from such training, especially skills which were considered as a byproduct of theatre training earlier. “I do believe that COVID and being online meant that we had to delve into things about communication and leadership practices, how we create together collectively but be separate and isolated. The pandemic perhaps honed and fostered some of these skills more explicitly with more awareness from the students at times,” she says, adding that she wishes to keep these in the future too, regardless of face-to-face teaching or in a blended capacity.

In her online classes, Stinton says, the medium made it easier for her to switch between theoretical and experiential learning in a way that face-to-face teaching hadn’t earlier. On Zoom, with 26 students across Australia, she could play on the piano while the cohorts sang from their individual homes, albeit mute. “So I’d teach them a bit of a song and they would be singing along with me so they could hear my piano and or they can hear my instruction or even my demonstration of vocals. And then they would sing it as I played and went along,” she shares.

In this real-time coaching, students would also demonstrate a bit or sing acapella or sing along to a backing track that Stinton would have shared with them prior to the class. “But what it also allowed me to do was that I jumped between platforms. We’d sing something, they’d experiment with something and then I’d show them a video clip from YouTube, or we’d listen to a recording right then and there. I’ve never been able to switch so quickly between theoretical and experiential learning like this before or integrate the history and contextual components as I could when we were doing online this year.”

The process worked so well for Stinton and her team that they’ve decided to have a part of the learning through online components as they did this year, and have other components through face-to-face teaching, COVID-19 restrictions permitted.

By the end of working online for three and a half months, Stinton’s students performed a portion of a musical online live on Zoom. They chose to perform the opening scene of The 25th Annual Putnam County Spelling Bee, a musical comedy with music and lyrics by William Finn. The setting of the musical was adapted to being on Zoom. For this purpose, each student had to design and recreate spaces at home. In terms of the script they did not change it much, except to alter an occasional word to suit it to the Zoom setting.

“During the show, we staggered entries. So you can listen on Zoom and not have your video on. The other actors would be listening and we worked it out in such a way that we could have no trace of them to be on Zoom and then they would jumped in as they would enter onto a stage in a face-to-face version. We varied the spatial depth and the physical direction as well in the choreography,” Stinton shares.

The students played with the idea of creating a shared physical space on Zoom and simple choreographed movements that were synchronized. Most remarkably, students sang live. For only a couple of parts, the harmonies were pre-recorded with the main melody sung live. If there were multiple characters singing different portions of the same song, Stinton sent each character their backing track. So, as and when one character finished their part, the other character would appear on Zoom, hit ‘play’ on their device and sing to that particular backing track. In all, the performance gave the audience a live experience of a musical, which, given the chances of technical glitches happening on Zoom, is commendable.

Needless to say, there were multiple challenges in getting right with technology and accounting for internet lags which required a lot of rehearsal. “Everyone experiences the sound differently on Zoom. Asynchronous sound is still a big problem globally and still hasn’t been solved yet. There are different music systems such as CleanFeed which can be used, but you can’t hear yourself back,” Stinton shares.

There was also some ensemble singing. In their rehearsals, students found that non-lexical sounds such as ‘oooh’ or ‘aah’ worked better for background singing on Zoom. To simply sound further, they decided to use piano as the only instrument instead of multiple ones. “But we feel, in the end, we were able to create this world of the play and be as close to a face –to-face situation, and create shared musical ensemble work as we possibly could whilst being online,” she asserts.

During the time that they spent together online, Stinton also felt a huge sense of responsibility towards her students.

“I knew that I had 26 people in front of me, who’d signed up for something and who wanted to learn and were hungry to learn, and were asking for guidance. I felt I had a responsibility to give them the best possible thing I could provide, so my attitude was always, ‘Yes, yes, we can’ to any situation and work things out as we went along.”

There has been a lot of back and forth on whether what theatre practitioners are doing online can be classified as theatre. There are some who believe so, some who vehemently disagree with it, and some who feel it is something between film and theatre. “I would call it theatre, even though it was online,” says Stinton, referring to her students’ performance, “And I’d call it theatre because of several things: the first that it was live, and the second that it was a shared experience, and even a shared space.”

The icing on the cake was the renewed, fresh energy students brought back into the physical space, when they returned to WAAPA in early August and Stinton found they exhibited a burst of energy and creative explosion unlike what she had seen before. “There was a joy and passion for live theatre and a tactile response, and physical embodiment of one being to another, even if they had to sanitize first, wear a mask and not breathe on anyone.”

Stinton believes the whole process and experience of working online has broadened her teaching methodology, rather than replace it. “It is important to take the online learning environment and milk it, capitalize on it in order to extend the learning and achieve the outcomes in new and exciting ways,” she says.