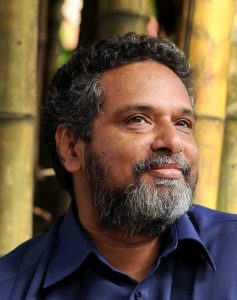 Chandradasan (born December 1958) is a theatre director, actor and writer from Kerala, India. He has directed 35 plays in Malayalam, English, Sanskrit, Kannada, Lithuanian, Finnish and Tamil. Chandradasan won the National award for the best play at Mahindra Theatre Festival for his play Karnabharam, New Delhi in 2008. He has achieved many awards for best play, direction, acting at theatre festivals all over India, apart from being a resource person in many theatre institutes, and universities. Chandradasan received the State Award of Kerala Sangeetha Nataka Academy for his outstanding contribution in theatre. He was awarded with the Fulbright-Nehru Fellowship 2014 to visit USA and do research on the social connectivity of theatre in multiple contexts. He is the founder of Lokadharmi Theatre Group and Mazhavillu (rainbow), a children’s theatre group, both based in Kochi, Kerala, India. He is the director board member of RRC, Bangalore of NSD. DSM writer Pranita Pandurangi caught up with him to chat about his session at the recent dramaturgy workshops conducted in Bangalore.

What was it that you specifically spoke to students about?

It was just one hour guest lecture so I didn’t pack too much in. I spoke about my approach to dramaturgy when I do my own productions. We don’t have a dramaturg as such but the director does it himself. I explained what I am using and doing as a dramaturg using the example of my latest production, Shakuntala. I asked them to watch the video recording of my play on YouTube, asked them to read the text as well. They discussed it later and they asked me about their own issues.

Going forward, are you open to the idea of having a dramaturg?

In the future, I don’t know what will happen in the theatre. We already have technicians to help the writers and directors to help understand the sociological context. As time passes, the relevance of dramaturgy is seeping in even if the director does it himself. Thought goes behind it. Travels in different levels – sometimes, it’s a classic, sometimes it’s a text of your own, sometimes, it’s a post-dramatic text so dramaturgy has its different functions and purposes. Study, research, reading of material, art material – paintings, music, history, news, incidents, which can be collected when you’re devising a production. This search is going on so as theatre becomes more and more professional, this gets hardened. The dramaturg, according to me, could be the director or someone who assists him. Depends on the group and if they have the potential to appoint someone as a dramaturg and the director also has a mind to do so.

Supposing it wasn’t a budget constraint, then would you employ a dramaturg?

I wouldn’t mind getting a person to do it, but I generally like doing the research myself. I always get suggestions from friends. Before I enter into production, I talk about the play and do my own readings based on it and talk to a host of people but I don’t know if someone can really spend so much time and do this for me. An amount of the work I would do anyway. Partly I would do it myself and partly open to introducing a dramaturg. The amount of dramaturgy clarifies my position taken in the play. My perspective deepens. Dramaturgy can go in many different directions. That’s what I feel.

My Home at the Intersection – a successful Experiment in Dramaturgy Dramaturgy : Questions and Clarifications with Sophia Stepf