"The more awards an artist wins, the less insecure he becomes" – An interview with Ramu Ramanathan 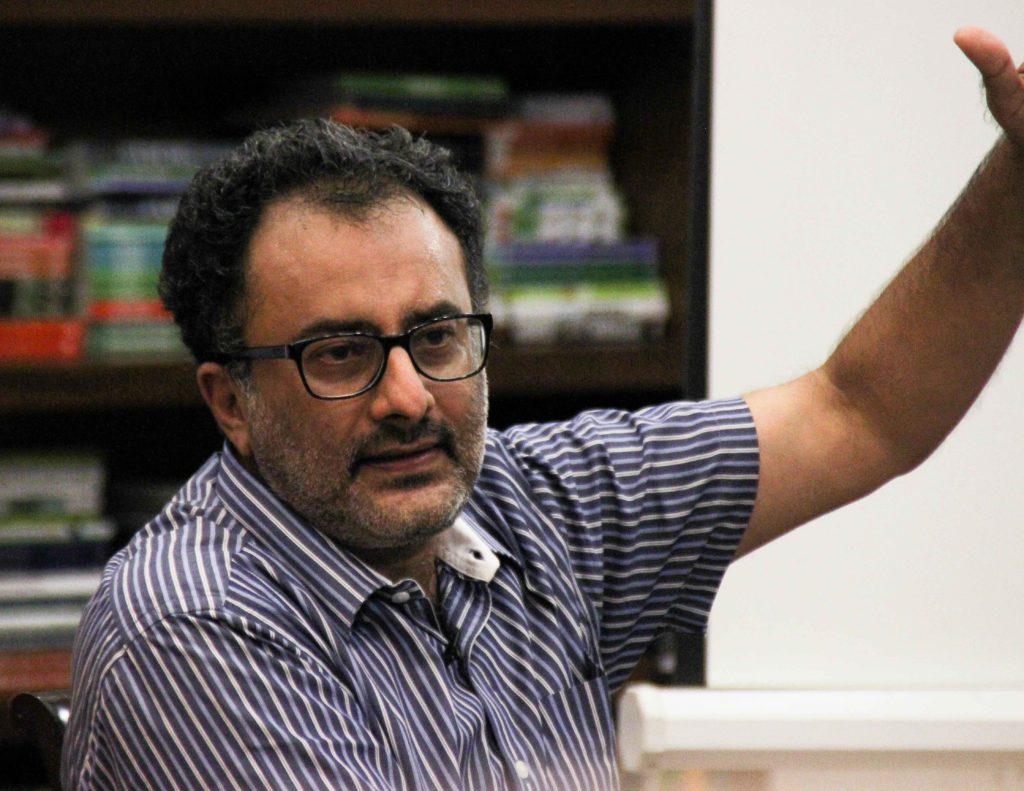 Ramu Ramanathan is not a new name in the Indian theatre circuit. In fact, it is a very popular one. He has, to his credentials, some of the most prolific awards in the industry. Recently, Ramu was awarded with the NDTV-Serendipity Arts’ ‘Arts Spectrum’ award in the Performing Arts category. We spoke to him on what it means to be an effective playwright and how he manages to be a journalist and editor by the day and a writer and director by the night. Read on to know his thoughts…
This interview has been sketched by Roshan Kokane, communications executive at the Drama School Mumbai with inputs from Ragini Singh Khushwaha, programme head at the DSM.
Roshan: Ramu, you have written over 30 plays and directed over 20. You are also an award-winning author, a full-time editor and a faculty member at the DSM. How do you manage to play so many roles and yet bag so many esteem awards? What’s your secret?
Ramu: Adam Zagajewski, a Polish poet said, “The more awards an artist wins, the less insecure he becomes and that affects the edges of his work.”  In a country like ours where there is widespread reluctance to acknowledge works of art, every award is important.
Ro: A lot of your work is centred around Mumbai city. Why so?
Ra: I have a love-hate relationship with theatre and with the city of Mumbai. There are days when I have a compulsive love-obsession and there are days when I detest the city from the bottom of my heart. As a journalist, I love the process of education and edification. I think artists have the ability to throw light on the topics that are in dark. For example, I admire Vijay Tendulkar’s penchant to tell stories of volatility of the social middle class drama. The manner in which Tendulkar like Bhau Padhye, Jagdamba Dixit and Shyam Manohar Joshi ripped apart the fabric of sophistication or pretence. They barged into the living rooms of middle class lives and shredded the veneer to pieces.
Ro: How did you get interested in writing and theatre?
Ra: I am blessed to have been brought up in a city with so much theatre and art. I grew up in the LIC colony in Santacruz, opposite the BEST bus depot. There were some exceptional plays of stalwarts like Dada Kondke, Nilu Phule and Ram Nagarkar staged there. It was a cross section of groups and people staging plays for the middle class and working class of Mumbai. Interestingly, it was hosted by the LIC labour union cultural wing. Theatre in Mumbai wasn’t the domain of the rich and powerful and high and mighty, but of all strata of the society. It belonged to everyone. Mumbai also has a history of theatre from the time of industrial workers. 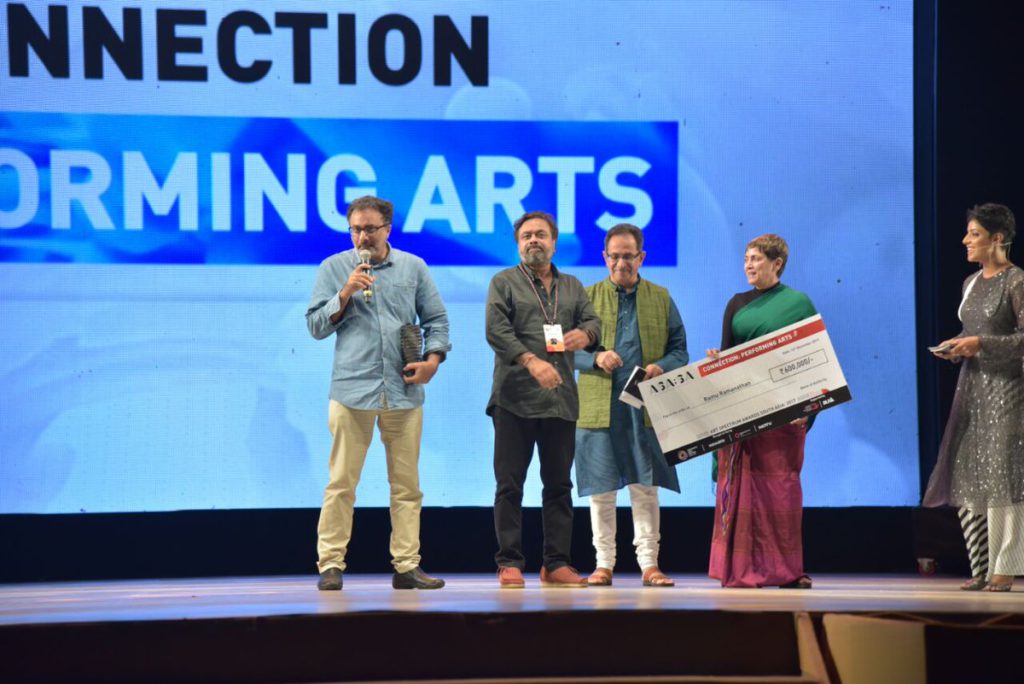 Ro: In what way?
Ra: During 1938-39, the Kamgaar Rangbhoomi theatre fest was established. These were informal improvised spaces of performances for workers to watch. One-act plays and Loknatya were really popular then. I have grown up watching some of the performances myself. Well, I am not that old but yes, the tradition of performance has been an old one. I have also attended labour union theatre competitions in Mumbai. Today, Mumbai has around 1000 to 1500 shows in a month and they are mainly performed in four languages namely Marathi, Gujarati, English and Hindi with a sprinkling of Konkani and Malvani. This huge repository of work to watch, inspired me to write.
Ro: What are your future plans?
Ra: Currently, I am collaborating with theatre artistes to highlight the pitfalls of Aadhaar through poetry. Through this project, I aim to create awareness regarding the privacy and welfare aspects of Aadhaar and the other side to it. Different theatre artists will come together and read sketches that would be later uploaded on https://aadhaar.fail/ I wrote the first Aadhaar poem (Ashwathama) to be read out at the Prakriti Poetry Fest in January. Three readings were in Chennai colleges. The response from the students and educators was good. They said, this poem should be on our syllabus. But we know that can never happen under the present regime. That’s how I thought about writing a few more.
Ro: Are you writing anything presently?
Ra: I am keen to write a play about the World War I in 1914 and its impact on Mumbai, the Mathura rape case and the independent autonomous women’s movement of the early eighties and Dr Ambedkar’s Mahad Satyagraha.
Ro: What advice would you give to young playwrights?
Ra: Some of my most favourite experiences in theatre and writing have been with young people. I think India is blessed with talented writers and theatre-makers. Every artist needs to understand that it takes a lot of time, energy, practice and patience to create works of art. One shouldn’t lose hope or motivation with failures or rejections. Every great writer (and by that, I mean writers I admire) have been endured decades of failure or depression. Another ability one must hone if they aim to be a storyteller is to be consistently brave enough to try new things and surprise oneself. For this, one has to read the old masters like Odon Von Horvath and George Buchner plus contemporary artistes like Ngugi and Fosse. Simply because you have to study the competition. I see a lot of potential in the younger generation today. I believe that they have the ability to break through cultural and social stereotypes and create a better future for freedom of expression.

Make sure that your content is potent with politics, humour and music.

Ro: In your view what is good playwriting?
Ra: In the last few years, there have been a proliferation of workshops related to playwriting. There is no fixed template for these workshops. In one session, I have taken the liberty to use Fyodor Dostoevsky’s text because there’s a lot one can learn about character sketches and plot lines from the old Russian master. In Dostoevsky’s book The Idiot there is a character of General Ivolgin. This character says, there is perhaps a lie in every sentence. Lebedyev is insufferable, he says, and had the gall to declare that in 1812, he lost his left leg and buried it in a Moscow cemetery. Now the astonishing thing is, Dostoevsky stole the inscription from his own mother’s tomb. Impossible, say workshop participants when they hear this. So how far should a true artist go? Dostoevsky is a true novelist. He will steal, his characters will lie. But ultimately, the work is brutally honest. And that is the point. No?
Ro: How is the writing scene in the Indian theatre circuit? What changes do you envision in the coming years?
Ra: Young people are uploading on YouTube, there are theatre monologues on podcasts. It ensures million hits in some instances. With the Aadhaar poems, the sketches are available all across the country. Plus, we have the liberty to archive contemporary plays. What DSM, Junoon and others are doing in terms of research and archiving of talks, interviews and lec-dems is amazing. This is the future of the Indian theatre circuit. The present movement and the journey.
Ramu was born in Kolkata but finished his education in Mumbai. He is currently the editor at PrintWeek India.
Ramu’s suggestions and playlists:
Favorite plays: