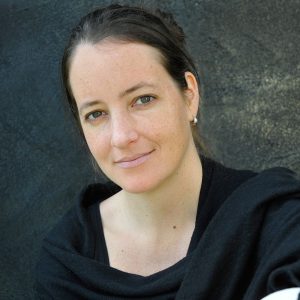 The term dramaturgy first appears in the work Hamburg Dramaturgy (1767–69) by Gotthold Ephraim Lessing, who is also credited with first creating and practicing this discipline. Although every production inherently has its own dramaturgy by virtue of the artists working on the context of the play, a dramaturg is a dedicated person on the creative team whose primary task is to support the production’s development by asking key questions, researching, providing context, and helping the artists to create the intended performance.

Sophia Stepf is the Artistic Director of Flinn Works (Berlin/Kassel). She was recently in India to run the Using Dramaturgy workshop that she designed in collaboration with Jehan Manekshaw of Drama School Mumbai. Our writer Pranita Pandurangi caught up with her to discuss what dramaturgy was all about.

“Dramaturgy is not an approach to theatre-making but it’s an inherent process in every performance. It has two meanings: Firstly it refers to the sequencing of events, the aesthetic choices and the distribution of information through time. Secondly can also mean the process of a dramaturg accompanying the production. The dramaturg acts as a proxy for the audience and helps the director or the creative team achieve their vision.”

When asked what are the different roles that a dramaturg performs, Sophia continued, “A dramaturg performs a combination of roles such as being a  sounding board, outside eye, working from concept to rehearsal to running shows, keeping the big picture in mind and making sure the production team stays on track, curating the experience for the audience including publicity texts, program brochures, background texts, etc. Dramaturgs can also act as creative producers. The role can also involve research, creating a historical road map for the production, finding material – both visual and text that correlates to the vision of the director and the team.” However, what if someone else involved in the production could perform these roles? Affirming this, Sophia says, “You can eliminate the dramaturg from the production, but you can’t eliminate dramaturgy.”

The need for dramaturgs and an interest in dramaturgy as a profession has been widely discussed in the Indian theatre scene in the last decade. What is still needed is a formal understanding and framework of the profession plus learning and practicing dramaturgical tools. Speaking about the experience of conducting the recent dramaturgy workshops, Sophia said, “ I really enjoyed creating the workshop. I did not want to replicate the way I studied dramaturgy, which was purely knowledge based, I wanted to created an empowering, experiential and contextual room of learning. The point of the workshop is to enable experienced theatre practitioners to work as each other’s dramaturgs in the future. We had a really diverse and dedicated group in both Kolkata and Bangalore with a great work ethic. We worked up to 11 hours a day plus homework and I am happy to say that all 24 participants finished this first part of the project. We have given them as many useful tools as we could without a strict definition of what dramaturgy is – every creation process is different and part of being a dramaturg means being flexible, being able to adapt to various artistic visions. Also not every dramaturg is the same. Someone might be good at historical research, someone else might be good with scripts and script analysis and someone else is an expert of devised forms. The participants are all working on someone else’s play as a dramaturg in the next six months and when we meet them in September 2020, at a 3-day- seminar, we will find out how useful the learning of the workshop were in real life.

Dramaturgy being essentially a German theatre practice, we asked Sophia if it’s really needed in Indian theatre scene today. She responded, “I’ve seen a lot of theatre in India for the last 18 years. There’s incredible creative potential and skill in terms of  script-writing, acting, dancing, singing, music plus rich traditions in various art forms to draw from. But there are a lot of projects I have seen in the urban scenario that haven’t reached their full potential. So dramaturgy makes sense all the more. Also many urban theatre makers are experimenting with new forms – from devised to documentary theatre to social gaming to working with marginalized groups – these new forms can develop much better with the help of dramaturgs. As theatre makers we all need professional help from time to time – dramaturgs provide that help. This can take many forms, one important tool for example is feedback. Feedback can be harmful and useless if egos, opinions and hierarchies get in the way. There is a need for a structured, affirmative feedback, that focuses at what works as opposed to what doesn’t work. Feedback can be a supportive and constructive process if done right. another tool I find very important is performance analysis, which means to understand and to describe how meaning is made on stage (through semiotics) and how emotions are created. That is a tedious exercise which we did in the workshop a lot and which is immensely helpful if practised regularly. It helps you understand why something works or doesn’t work because you distance yourself from your immediate reactions while watching. It is a bit like Vipassana meditation – instead of reacting to  your physical sensations and emotions, you watch them and understand them. This is not new to the Indian context of course, the Natyashastra is one of the most extensive texts on dramaturgy ever written. I just see that the practice of contemporary performance analysis is not used in the urban context enough – and this is one of the dramaturgical tools that can really help make performances better.

On being asked if there would be more such dramaturgy workshops in India in the future, Sophia commented, “Yes, it would be great to have more workshops to heighten the impact on the theatre scene and to create a sustainable practice. At the moment we have created a ripple in the ocean. We want to create a wave. The workshop is ready to go, we just need to find more funding. We received over 100 applications for the 24-seat workshop that we had, so we already know there’s a demand for it.”

Theatre Stalwart Chandra Dasan’s Approach to Dramaturgy Drama from Behind Closed Doors: A snapshot of DSM’s response to the Covid 19 pandemic