The "Paraya" who became a playwright

Gaurangi Dang is an alumnus of The Drama School Mumbai. She has been working with Ramu Ramanathan since she graduated from the DSM. He was the one who told her about the talk. After the talk, Gaurangi annoyed him with questions. The next day he said that DSM wanted a write up about the talk and if Gaurangi would be interested in doing it or should he ask Akshay Shimpi instead. Gaurangi said that he should ask Akshay sir, for she didn’t have any notes.

Three hours later, Gaurangi sent him whatever she remembered. Here it is. 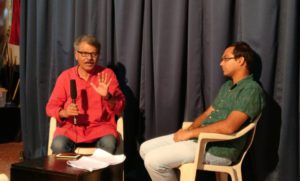 Shafaat Khan spoke to a handful of theatre students and theatrewallahs at the legendary Purandare Hall of the Mumbai Marathi Sahitya Sangh on 13 May 2017. It started when he was a little boy. His father had a government job that required them to constantly be moving across Maharashtra. Young Shafaat Khan would create a new identity for himself, each time they moved and he’d continue to be this person until he was caught in “a lie”.
Sometimes things would get awkward, especially in the history class.
Shafaat Khan said, “History is taught in a specific way in our country. There are very few Muslim heroes in our books. When little children learn about the battle between the fearless Shivaji and Afzal Khan in class, they all want to be Shivaji.”
The children in Shafaat Khan’s school were no exception. Since there were already so many Shivajis, the responsibility of being Afzal Khan would land on the tiny shoulders of Shafaat Khan regardless of whether or not he wanted to play the part. The original battle ended with Shivaji beating Afzal Khan, but this history chapter continued during the recess breaks.
By the time he was six, the family had moved to Gokarna. Their neighbours – their home was directly opposite his – had hosted a Yakshagaan performance in their aangan one evening. This colourful, loud and noisy spectacle formed his first impressions of the magic of theatre.
Later from another terrace, he’d see lines of people going towards the temple near his house on a regular basis. These people would be clutching a chicken by its feet and singing jovial ditties. On their way back, they’d still be holding the chicken by its feet and singing, but the head was chopped off and so the blood would drip down and cover the entire pathway.
In all this lay “drama”.
The Khans lived in a government housing with sprawling compounds. Back in those days, theatre troupes would travel from village to village, performing Ram-Leela. Sometimes the troupes would perform in their house, near the water-tank and often Shafaat Khan would watched the play from his vantage position in the home. After their scene was enacted, the actors would return backstage, lift up their saree or dhoti, sit on the floor and light a beedi and sip their chai. To someone who had just seen them on stage, these people were gods and they looked like gods, but there they were sitting at an arm’s distance from him smoking their beedi. The actors made up like divinity with bows and arrows in hand, squatting on the ground and behaving so mundanely – can do to the mind of a child, who then watches them step onstage and play gods in a completely different light!
This was the story within a story within a story. 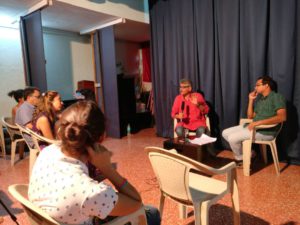 This young Shafaat Khan grew up, wrote a one act play for an inter-collegiate competition that bombed, but still he fell in love with writing.
He eventually went on to become a cult playwright.
In 1997, the NSD wanted to create a repertory of work in order to commemorate the 50 years of the “radiant, auspicious journey” of the independent India. For this golden jubilee celebration, many playwrights were invited for a workshop – Arjun Deo Charan from Jodhpur, Hasmukhbhai Baradi from Ahmedabad, Shafaat Khan and others – to write an Independence Day play with government grants. Khan had no concept for the piece, and the pressure of producing something was massive.
While most of the writers went into the residency with a story, Shafaat saab was still waiting for the story to come to him. Each morning they’d all wake up and share their respective stories and how far they’d gotten. When it was Shafaat Saab’s turn, he’d apologise and tell them that he was still searching. This went on for a few days. At this point Shafaat Saab had begun to get a little restless.
While at the workshop, he read a newspaper clipping about a jeep traversing a dessert to drop people off to their destinations. A villager had gotten off at his village, and had found himself unable to pay the Rs. 2 fare that the driver demanded. What happened as a result was that the driver drove his jeep in reverse, ramming into the villager and killing him.
Something clicked inside Khan’s brain.
He said, “A play is prepared inside of you. This newspaper report triggered it within me. Fifty years after his country has received independence, a citizen doesn’t have Rs 2 to pay for a ride and it results in his death. Who has acquired this freedom we speak of? What dirty politics are played in the name of class and caste? These are the questions a writer must ask.”
A few days later on the invitation of his director friend Waman Kendre to the August Kranti maidan. Kendre was rehearsing for a play nearby and asked him to come along for a rehearsal. The play was based on the freedom struggle. Huge performances were planned for the August Kranti maidan. Elephants and canons were all present on the maidan alongside my Marathi theatre friends, who had called me there for a rehearsal. The first thing Khan saw on entering was Jhansi ki Rani, Jawaharlal Nehru and Mahatma Gandhi in conversation whilst in full costume. On seeing Khan, Nehru instantly came up and asked, “Do you have a matchbox, I need to light my cigarette?”
Khan couldn’t even recognise his friend in costume, and the matchbox interaction with Nehru struck him as very odd.
He thought it would be rude of him to deny Nehru a cigarette, especially since they all looked so exhausted. It turned out that Shafaat Saab had found his story.
It had always been within him. This was just the turning point.
The images buzzed in his head, and the first draft was ready in five days. This was Shobha Yatra’s process.
Someone at the talk asked him during the Q&A session, “Why writing?”
He very wisely replied, “As a child I always felt like I was ‘paraya (outsider)’. Playwriting was my way of getting society to accept me.”