On The Other Side Of The Pandemic: Ideas, Practices We Take Ahead In Theatre

“The theater is the only institution in the world which has been dying for four thousand years and has never succumbed. It requires tough and devoted people to keep it alive.”

― John Steinbeck, Once There Was a War

In March 2020, the global climate suddenly changed. It changed for the better or for worse in all aspects of life but for those of us involved within the theatre, the effect was confusing, to say the least. Theatre-makers were grappling with the ever blurring lines between film and theatre even prior to the pandemic but now there seemed to be a preternatural push, from forces unknown to the theatre, towards film.

This effect invariably caused theatre makers to re-visit their practices and look at the elements that made their work belong to the world of theatre. The film industry was still able to churn out shows and features with incubated/sanitised practices. This put even more pressure on theatre-makers to adapt to the changing times. These forces gave us what we began calling Zoom Theatre, now developed into Digital Theatre. Prior to the pandemic, this term exclusively referred to recordings of live performances whereas now it has found a new definition in a blended style of performance. Performers showcasing a blended/hybrid format of rehearsals began to shape the new genre of theatre, offered to audiences across the globe from the comfort of their homes. Like all things new, this mode of performance found its followers, lovers and naysayers.

As another year of disruption comes to an end, we asked theatre-makers to share what has changed for them and their practice during this year and what they wish to take forward as we emerge (hopefully) from this pandemic portal.

Bengaluru-based playwright, director, dramaturg and artistic director of the independent theatre group Qabila, Nisha Abdulla knows for sure that something has unlocked in her head in the past year in terms of what performance can be. She says she finds herself thinking dramaturgically differently. 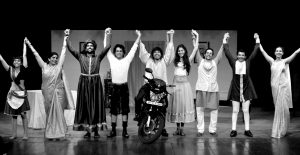 “In simpler terms, it is the task that one takes on for a rehearsal process and what are the different ways in which it can be realised,” Abdulla explains. With alternate modes of presentation, there are different ways to perform. “Another interesting self observation is that I don’t see myself following the three act or five act structures,” she adds.

The experience of working online became another dramaturgical lens for the work Abdulla is doing. It is not an ‘either or’, but an ‘and’ approach to the work. She admits that this lens has allowed her to question what she’s arguing for.

“For instance there was a project we did in October-November where we wanted to make a film but we wanted the audience to have a shared experience of watching the film. So, we selected a series of days and decided to show the film and have conversations with the audience immediately after, like one would do with a screening of a documentary. We called it a docu-drama to give the audience an idea of a differing format. Some audiences were selected as the panel who spoke to the remaining audience members at the end of each show,” she shares. Her team now has a film-maker which would not have been the case prior to the pandemic.

For most, the virtual space is a whole new beast but Gerish Khemani feels there is a lot of scope to explore in its cinematic possibilities.

Khemani, who is known for works such as In Search of Dariya Sagar and Anandovari, describes himself as someone who finds textual meanings first and works with actors in a devised, ensemble space. The physical space is integral to what becomes the final showing. The pandemic threw a spanner in the works in that regard for the director, writer and DSM faculty member. What changed for him with online showings is that he began to explore film concepts, ideas, philosophies, theories and exclusively film language. 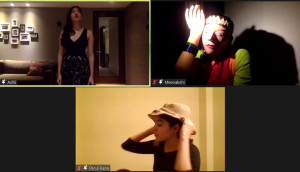 “It’s stirred in me the desire to create something exclusively film and exclusively theatre but not to blend it just yet,” Khemani shares. “I feel there is a lot to be learnt, for me, for both visual mediums before I can jump into something mixed. The changes in technology for digital theatre would then be the next thing I’d find myself updating with. I do want to see how to bring technology into the live space in a meaningful way.”

Speaking of what he would like to take forward from these pandemic months, he admits that it is a heavy question, one that he is still exploring. “I can say that it has definitely slowed me down and made me think more deeply about what I am doing, how I do it, how I create work – the process of creating work and how to work with people,” he says. He adds it has made him reconsider the kind of projects he’d like to do and the kind of storytelling that he’d like to be part of.

“Logistically, it has taught me that a lot of work can happen online that saves time, money and effort. It allows me to start projects keeping in mind that a part of the process may be online,” he says.

Having blended processes in making new projects is something many theatre-makers are considering as we continue living in a world where new virus variants keep emerging. If there is one thing that Anirudhh Nair, co-founder of the New Delhi-based theatre company Guild of The Goat and DSM faculty member, wants to take forward in his practice from this year, it is to keep collaboration alive and not let it be dependent on physical meets and explorations. “Not just with international companies but with domestic collaborations as well, both inside the country and city,” he clarifies. 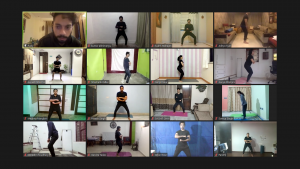 For example, during the first COVID-19 wave, Nair worked with a choreographer in the city. “We met online almost everyday and honestly it would have never been a possibility in the pre-COVID world. We rehearsed for two and a half hours every day, about 5 days a week. Just imagine the logistical inconveniences with having that whole thing in-person,” he wonders out loud.

He also believes that the concept of online theatre festivals should be considered and taken into the future. “They have been a space for new makers and actors to experiment,” Nair states.

The past year also allowed Nair to realise ways of reducing carbon footprint and having sustainable rehearsal practices, which he believes we must hang on to. Speaking of sustainable practices, actor, theatre-maker and DSM faculty member Tushar Mathew realised in the past year that his interest in ecology and interest in theatre are not two separate things, but that they exist on the same plane.

“Especially now, my teaching depends a lot on how those two things live together in my being and mind,” shares Mathew. “I think an important question that I was confronted with is, ‘If not theatre what else?’ This question really pushed me into my interests with ecology, conservation and climate change. It pushed me to teach a lot more than I used to before.”

For many, the pandemic has changed one’s raison d’etre. It is the same for Mathew. “It’s not just about being in or around the stage anymore,” he says. “I’ve understood that my personal interests are finding a theatrical expression. Now, the new journey has been to see how this new found purpose finds a artistically yet financially sustainable way of expression,” he says in conclusion.

A Note From Irawati Karnik, DSM’s new Academic Head of School: ‘Hope to drive pedagogy towards a more multi-disciplinary approach’